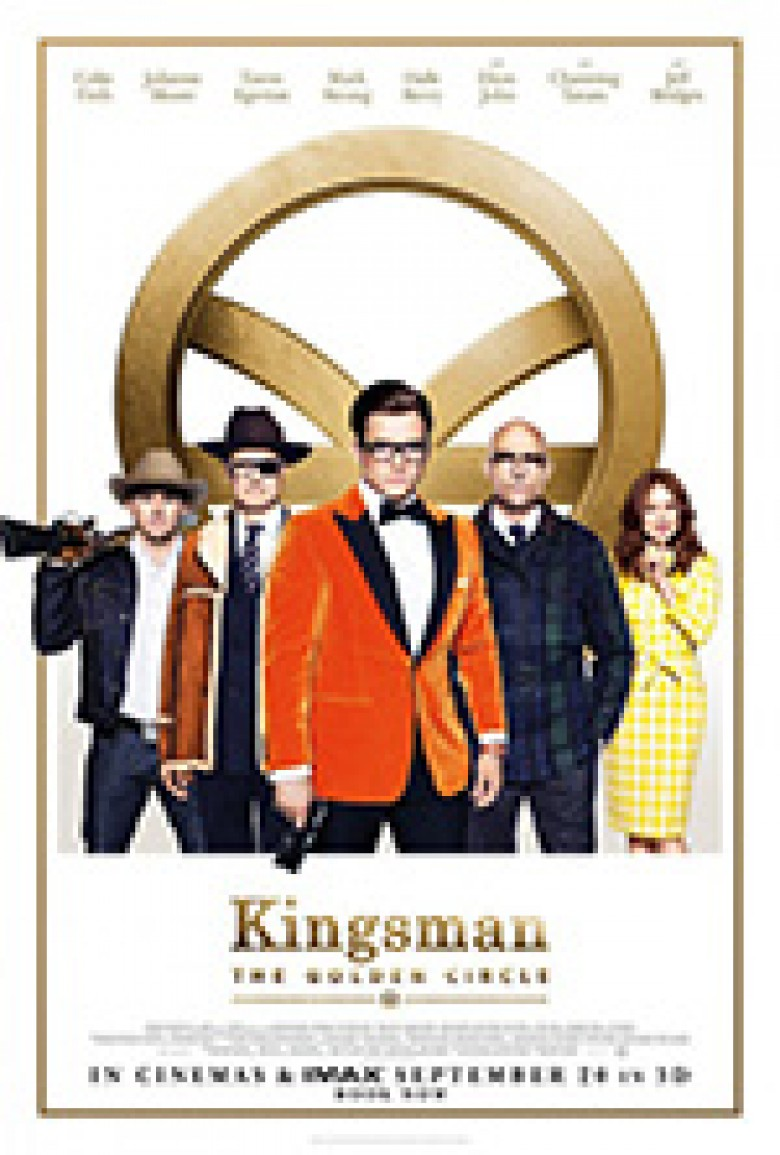 “There’s no room for emotion in this scenario”

When Kingsman: The Secret Service debuted, comparisons to creator Mark Millar‘s other comic book-to-cinematic adaptation Kick-Ass were inevitable. How the latter spun the superhero template, while the former spun stylish James Bond-type spy actioners. It was all high-concept insanity with a kid from the wrong side of the tracks proving that courage, heroism, and finesse aren’t as much a product of environment as they are of personality and the capacity to overcome one’s disadvantages. There was a sweet surrogate father/son dynamic, too, with actual stakes to cement their shared feelings, and a self-aware, manically fun villain with a cruel psychopathy leading towards mass genocide to fight. We could only hope that its sequel would retain this mix of extreme action and empathetic heart without losing its way like Kick-Ass 2.

Sadly this hope is dashed very early on, once director Matthew Vaughn and co-writer Jane Goldman decide to make Kingsman: The Golden Circle an in-franchise reboot rather than a strict continuation. After a rousing opening sequence pitting the aforementioned “kid” (Taron Egerton‘s Eggsy) against an old adversary back from the dead (Edward Holcroft‘s Charlie)—an energetic battle confined to the close quarters of a car’s interior while also being chased—things literally explode. Old friends and new ones (complete with red herring A-list British talent) disappear in a cloud of smoke, leaving Eggsy (the new Galahad after Colin Firth‘s Harry Hart’s death) and Merlin (Mark Strong) as the last vestiges of the legendary Kingsman organization. It becomes their mission to discover the culprit and satisfy their desire for vengeance.

Poof! We’re back at square one. Enter a lengthy convoluted expository explanation for how Charlie survived; a lengthier introduction to Kingsman’s sister organization in America known as Statesman (led by Jeff Bridges‘ Champagne and his own favorite agent from the wrong side of the tracks in Channing Tatum‘s brash Tequila); and yet an even lengthier rewind to witness the impossible resurrection of Harry from a bullet through the eye (calling this a spoiler holds zero weight now that Fox has used him in every single piece of marketing material available to them). All this tedious dialogue and narrative hoop jumping and we still have to also meet our new villain: Julianne Moore‘s Poppy. She may be as eccentric as Samuel L. Jackson‘s Valentine, but she’s hardly as substantive.

His false sense of altruism is a glaring omission. Whereas Valentine’s insanity was born from a hardline stance built atop an understandable mission to save the world from global warming by purging the majority of the population to diminish the strain on resources and let his handpicked elite recreate society in their image, Poppy is selfish to the core. She’s a lonely drug peddler based far from her home country of America who no longer wants to lament the fact that tobacco, alcohol, and sugar are legal while marijuana, cocaine, and opiates aren’t. Her plan is thus to blackmail sympathies by threatening to purge the majority of the population until her demands are met. The faux altruism comes from the U.S. President’s (Bruce Greenwood) decision to let her.

This notion of men taking control is a common theme throughout the film—one that shows the whole to be completely tone-deaf. At least its predecessor had Sofia Boutella as the badass Gazelle to counter the testosterone with unbridled aggression. This one does not. It kills the only potential badass woman within the first twenty minutes, renders Poppy a figurehead constantly being undermined by her male employees or having her two-dimensional plans hijacked for three-dimensional political commentary (this is the War on Drugs conservatives want), and treats its other three major female cast members as sidekick (Halle Berry‘s Ginger-ale), trophy (Hanna Alström‘s Tilde), and vagina (Poppy Delevingne‘s Clara). I’m not embellishing the latter either. Vaughn and company wrote her to be a literal, plot-specific, walking vagina.

What’s worse is that the plot itself is compartmentalized to the point of boredom. The “celebrity” faces of Statesman take a back seat so the cost-effective (but no less talented) Pedro Pascal can be their stand-in. His Whiskey is an electrified-lasso toting cowboy out to take down Poppy with Eggsy, Merlin, and the broken (and depth perception-challenged) Harry. So we watch their journey together with shallow psychology and a ton of callbacks along a path to the unknown. We are the only ones aware of Poppy’s base (a '50s chic wonderland of aesthetic cool and robotic nonsense) and are thus transported to it by the story. Rather than have what she’s doing make contextual sense to the day-by-day happenings of our heroes, however, it exists separate from them.

For most of the run-time Eggsy and company don’t know who Poppy is or even that something is being planned. Their early quest for revenge is tabled for all the exposition mentioned above and any segue to her is to add a laugh, an extended cameo from Elton John (How much did they pay you, Reginald?), or an ineffective ploy to make her seem villainous. Poppy’s not villainous, though. She’s merely high on laughing gas with a paranoia so entrenched within her psyche that she hires humans for no reason other than to kill them in front of us. Poppy becomes a punch line while Charlie is allowed to be the true baddie of note. It’s another man filling in for the woman who should be in charge.

Some of the fights are fun at least—if you can look beyond the stilted movements created by a huge amount of computer-generated help. There are a few good gags, too. But no one involved even pretends to have motivations beyond those manufactured by the plot. It’s all so melodramatic, from a double agent seeking revenge for a lost sweetheart to a Presidential cabinet member in Emily Watson‘s Chief of Staff choking us with the “everyman” trappings of “good people use drugs too.” That whole subplot of legalizing narcotics as a “good” thing for America is so poorly drawn that it hijacks its own commentary about the lives ruined by the government where pot is concerned to include hard drugs like meth. Should we be sympathetic or not?

The whole is scatterbrained beyond belief with way too much happening. Why pay Tatum to actually be in the movie when Pascal comes cheaper? Why pay Moore to be an integral part of the plot like Jackson before her when Holcroft can take over? It feels like Vaughn and Goldman spent too much time writing things to ease their budget rather than injecting energy and coherency. They care more about hitting marks than audience enjoyment and it shows. The moral gray areas that make a group of racists mowed down in their church “fun” are gone. Genuine empathy for the heroes is, too. Instead of saving the world, Kingsman 2 is about the personal happiness of characters we barely recognize anymore let alone like enough to see happy.