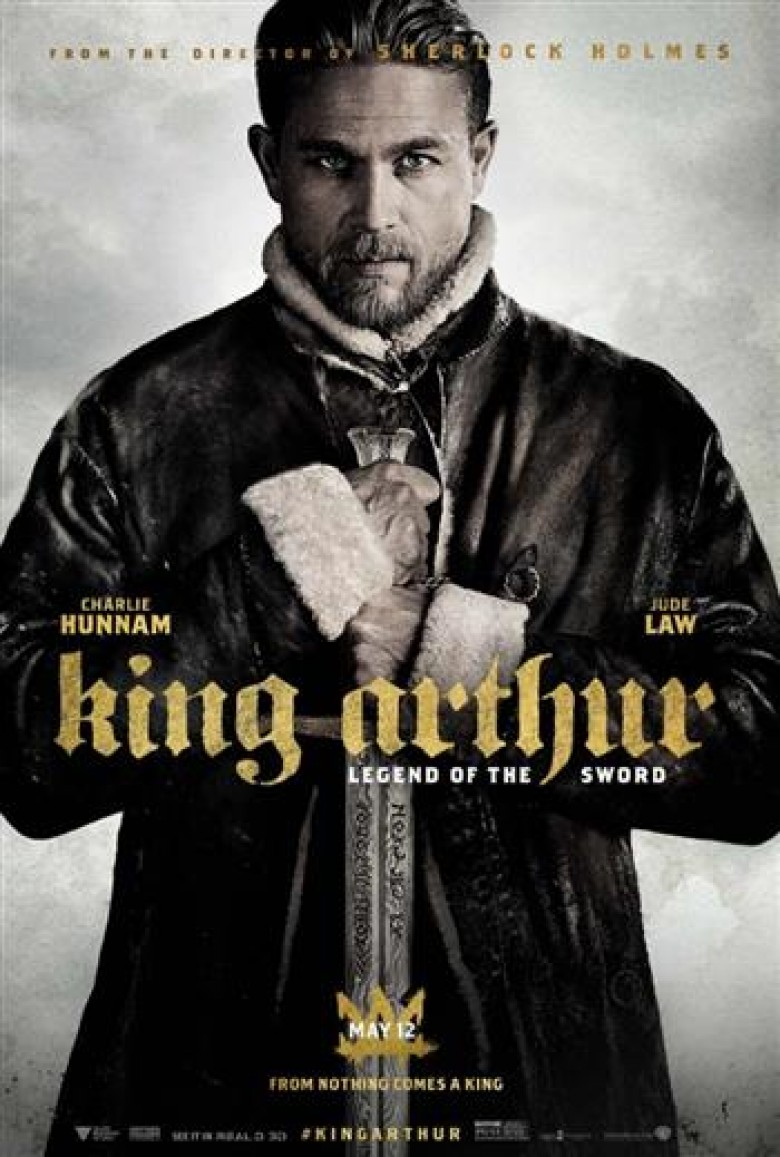 “We all look away”

The magic has once again been returned to the lore of Excalibur in a way that brings it closer to World of Warcraft mysticism than Sword in the Stone trickery—for better or worse depending on your interests. I for one actually liked Antoine Fuqua‘s King Arthur from 2004, its decision to do away with the spells not wholly destructive to the very fabric of the myth like removing the Gods was to the debacle that is Troy (rather than an expertly placed hit, its ankle shot to Achilles was a random, lucky example of horrible marksmanship). To be able to tell an iconic tale in a fresh way is something to be appreciated and doing so by astutely stripping legend down to its essence is even better.

If you’ve ever seen a Guy Ritchie film, however, you know “stripping down” isn’t in the Brit’s vocabulary. The Snatch director likes to add instead: style, sarcasm, and quickly cut expository sequences simultaneously showing and telling past, present, and future in a staccato whirlwind of witty remarks and smug deliveries. It’s a trademark that’s vaulted him from cockney indies to the heights of helming big budget reboots in his mold whether the fun Sherlock Holmes or the vastly underrated Man From U.N.C.L.E. Well, please welcome King Arthur: Legend of the Sword as this stable’s latest addition, its “Born King” as scrappy orphan turned respected (and feared) hustler kingpin not needing magic and a sword to provide his birthright. It’s much more efficient to simply supply a magic sword.

Think the One Ring from Lord of the Rings as King Uther Pendragon (Eric Bana) and his rightful heir are more or less transported through the veil of time and space whenever their hands grip Excalibur—a sword forged from a powerful Mage (wizards are so 1963) staff by an unseen Merlin (rumor is that five potential sequels lay in the pipeline to give our favorite wizened protector his due later). Senses are heightened, magic is rendered impotent, and strength beyond one’s wildest imagination is conjured. Of course the King’s brother Vortigern (Jude Law) would want it for himself. Unfortunately for him, though, his blood only pairs with its steel if Uther and Arthur are dead. So his power to wrest away control must be born from darkness.

A little murder here, bit of sacrifice there, and a few demonic elephants the size of castles later and Vortigern is ruling with an iron fist while Arthur is relegated to a Londinium brothel for his formidable adolescence far removed from his true position. In pure Ritchie fashion we watch the highlights of his growth into a man with rapid-fire snippets of abuse, training, money earning, and accruing of confidence and skill for victory. He goes from snot-nosed kid victimized by bullies to hardened wise-ass bullying the bullies of the would-be victims under his watch and care. Arthur (Charlie Hunnam) becomes a pillar for the common man—one who’s too effective for his own good. Unwittingly messing with allies of the King means finding yourself in his crosshairs.

So he, his friends (Neil Maskell‘s Back Lack and Kingsley Ben-Adir‘s Wet Stick), and his father’s former compatriots (Djimon Hounsou‘s Bedivere and Aidan Gillen‘s Bill) are pitted against Vortigern, his right-hand (Peter Ferdinando‘s Mercia), and … eviler Ursula? The legend itself stays pretty true to its blueprint with Arthur lifting the sword, the king wanting him dead, and the people’s will through rebellion helping make things right. What’s different is the abject darkness—the murkily devilish intent of power-hungry Mages (Rob Knighton‘s Mordred) and demons with flaming skulls killing with impunity. Suddenly there’s a mystically bright hue in the eyes of villains (red) and heroes (blue) while a young woman (Astrid Bergès-Frisbey) uses “Game of Thrones” warg powers to fight for good and Mage knowledge to teach.

The art direction is on-point as far as pushing the boundaries of its PG-13 rating with woodland nymphs, naked syrens, mountains of bodies, and its single f-bomb for effect. There are runes on Excalibur, ancient symbols binding its power to Arthur as it also provides him a window to the past to remember what it experienced the night his parents were murdered. The story is about this man accepting his place as King and realizing the attributes that made him so respected (if not morally pure) on the streets would suit the throne just fine. Vortigern is rendered a monster by contrast; ineffective attempts to earn sympathy via his suffering upon committing heinous deeds for power performed to ensure our hopes for viewing his slow and painful death.

Unfortunately, an objective look upon what occurs to place Arthur and his uncle on their collision course forces our realization that little happens in the way of substance. Ritchie and writing partner Lionel Wigram (working off ideas from Joby Harold and David Dobkin, who was originally set to direct with Kit Harington in the lead) project their stylistic flourishes in tone, action, wit, and insanity, but its all somewhat an empty façade despite adding up to an enjoyable romp. We do find the characters endearing (Hunnam is highly entertaining as the cocksure new blood, Hounsou and Gillen prove equally self-righteous and confident in their experience, and Maskell delivers welcome humanity alongside Bleu Landau as his son Blue) despite gradually being bored by the conventional origin tale surrounding them.

The action can be unyielding and yet most instances of Excalibur taking control of its owner play out by only showing us the before and after. While this creative choice worked swimmingly in The Man From U.N.C.L.E. due to its inherent humor, the dour drama of King Arthur: Legend of the Sword loses a bit of its impact as a result. This is a story of war rather than espionage (which Ritchie’s Sherlock films also pack in their mystery), one that craves choreography and physicality beyond a sequence affixing cameras to the faces of actors as they run and scream. It often feels as though the filmmakers strove to transform the film into street-smart antics, but couldn’t quite overcome its need to be more expansive in its conflict.

As compensation, Ritchie sees many scenes going too far into a fantastical realm of Tolkien meets WoW with gigantic snakes and bats popping up here and there before the climactic fight playing like He-Man against Skeletor at the mouth of Mordor. While this re-envisioning of Camelot should be applauded for trying something new, its desire to crib off so many other iconic aesthetics does more to render it generic than unique. So whether I had fun on the ride and found myself investing in the characters or not (I would gladly watch at least one more film if it’s able to build off this one’s world to deliver something fresh), it’s impossible not to walk out knowing the property is too big in scope for Ritchie’s particular sensibilities.