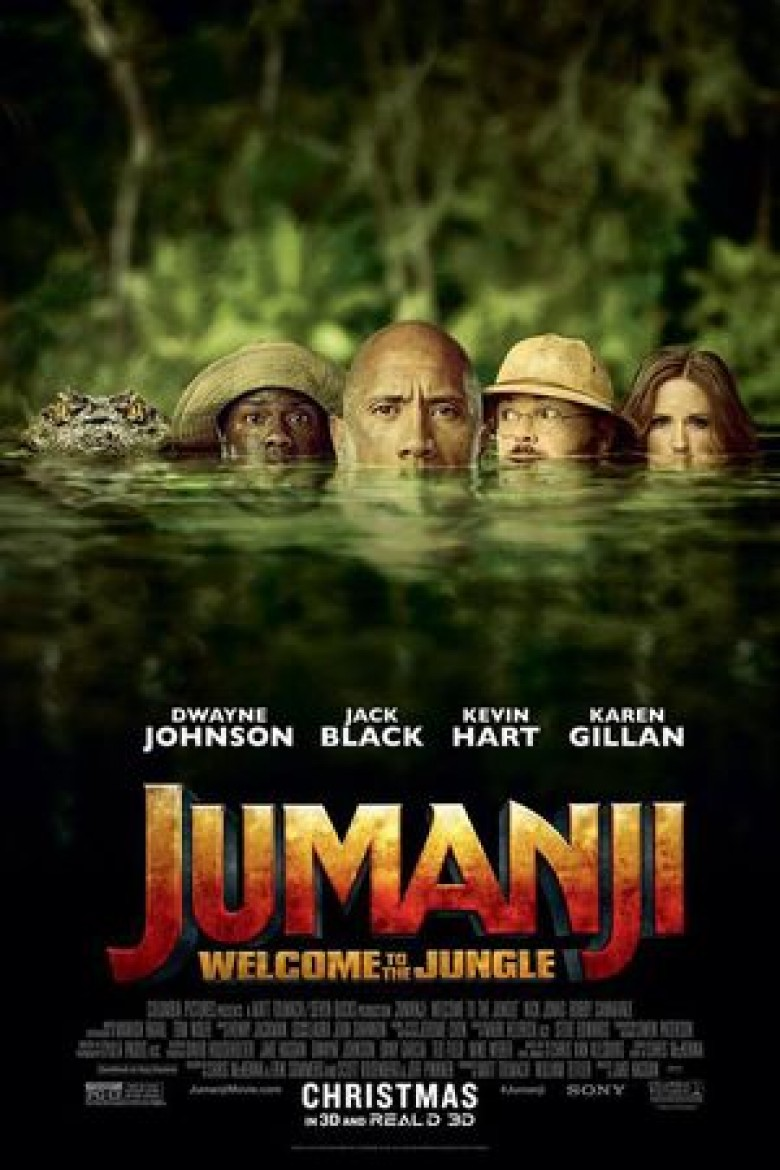 The end of Jumanji shows Alan and Sarah chaining up the board game before throwing it over a bridge into water. Later we see it washed ashore on a beach, buried in the sand with chains removed as people walk by speaking what sounds like French. So we wonder how long after the main plot this Planet of the Apesending is set. Did it cross the Atlantic? There’s real fun to this abstract epilogue with infinite possibilities, especially since the unlikely sequel Jumanji: Welcome to the Jungle deals with a videogame version of that “ancient” pastime. Maybe we’d therefore see the transformation from board to console and understand a bit more about the “magic” involved. Well, any such hope is inevitably dashed within the first five minutes.

Like the 1995 original before it, screenwriters Scott Rosenberg and Jeff Pinker(from a previous draft by Chris McKenna and Erik Sommers) aren’t interested in giving Chris Van Allsburg‘s creation backstory when they can simply use its premise as the backbone to a new effects-heavy adventure. As such their version (with Jake Kasdan at the helm) picks up where its predecessor left off: on that beach. Rather than be decades later and in France, however, we discover we’re still in Brantford, New Hampshire circa 1996. A middle-aged man is seen finding this dangerous treasure, taking it home, and gifting it to his teenage Playstation-loving son Alex. The boy ignores it until drums call him to reopen it and discover a vintage game cartridge where the board once was.

So the evolution from board to console is in fact an instantaneous one. Somehow Jumanji acknowledges how tastes change and technology improves, its need for players adjusting its aesthetic accordingly. (Just wait until a third installment arrives twenty years from now with a return to dice as the resurgence of table-top games in the 2010s takes things a nostalgic step backwards.) And like it did with Alan Parrish, the game consumes its first player before collecting dust in a high school donation bin. Things then fast-forward to 2017 and its twenty-first century Breakfast Club of geeky brain (Alex Wolff‘s Spencer), outcast brain (Morgan Turner‘s Martha), athlete (Ser’Darius Blain‘s Fridge), and princess (Madison Iseman‘s Bethany). They pick-up their controllers, choose their characters, and find themselves lost in the jungle.

Here arrives the twist. Instead of forcing players to experience the always-outlandish hazards their token avatars abstractly combat courtesy of game cards, this quartet becomes their electronic avatars to act and react to whatever mission and “big boss” is set before them. So where Alan aged in the jungle until another player rolled him back to the real world, these teens are frozen in time and trapped within ageless fictional characters owning pre-ordained strengths and weaknesses until they beat the game and free themselves. Geeky Spencer becomes brawny hero Dr. Smolder Bravestone (Dwayne Johnson); outcast Martha is now “killer of men” Ruby Roundhouse (Karen Gillan); Fridge’s mammoth footballer becomes diminutive zoologist Franklin “Mouse” Finbar (Kevin Hart); and Miss Bethany transforms into male Professor Sheldon “Shelly” Oberon (Jack Black).

What follows is a wholesome family comedy about self-absorbed clique-ish teens softening their narcissism into empathetic teamwork wrapped in a videogame satire beholden to its medium’s generic rules and tropes. The game literally takes over when necessary (Fridge/Finbar will spout textbook information about animals the former doesn’t know but the latter is an expert on), provides NPCs (non-playable characters) to supply necessary exposition and stand in the way until prompted by their skip logic to move things forward, and contains hazards as disparate as aggressive biker gangs and sugary sweet cake. Its levels increase in difficulty as main antagonist Van Pelt’s (Bobby Cannavale) ability to control animals perpetually looms, the kids’ mission to return the “Jaguar Stone” to its monument hinging on their learning to trust one another.

Enter the numerous dynamics at play whether Spencer and Fridge’s long-since fractured friendship due to age and interests, Spencer and Martha’s unrequited affection for each other, the physical-attribute-centered identities of Fridge and Bethany being flipped on their heads, and the necessity of understanding their avatars’ capabilities in order to survive. Half the time these kids must recognize what it is that makes them special and the other half has them embracing that which makes their characters special and thus what they should aspire to adopt in themselves. While there’s a learning curve to everything (the discovery of them each having three lives leads to sacrifices, hard luck lessons, and even murder), these four (alongside Nick Jonas‘ stranger Seaplane McDonough) do possess exactly what’s needed to succeed.

As someone who hasn’t really played a videogame since 1998’s “The Legend of Zelda: Ocarina of Time,” this era of role-playing adventures is still fresh in my mind. So while some of the mechanics are inferior to what’s used today, I thought they were perfectly manufactured to both send-up 90s games and propel this specific plot forward. It’s not without some faults (they introduce the concept of “cut scenes” being experienced by the foursome at the start and yet show us one towards the end that they don’t see, a missed opportunity for an extra laugh via them being forced to watch), but for the most part it works. Having multiple options for certain scenarios (some with the potential of death) even makes it seem like they’re “playing.”

In many respects the weaknesses of these types of films also double as strengths to the satire. Suddenly there’s a point to rendering Cannavale as a two-dimensional cardboard villain who literally exists to ignite the players fight or flight response. The filmmakers don’t have to spend energy making his Van Pelt complex because he isn’t real. He’s a stand-in for the kids’ internal struggles and anxiety-ridden hang-ups, a surrogate to fear and prevail against without more than the threat of death being necessary as motivation. There are exceptions—just because each character has three lives doesn’t mean we need to see them all used when the plot can be improved by excising the repetition—but you’ll have resigned yourself to ignoring them for the fun received in return.

This is due in large part to the unforgettable performances at its center. Johnson perfectly embodies Spencer’s teenage awkwardness and cowardice; Hart is allowed to do his whole “I’m a Grown Little Man” shtick considering he’s a six-foot tall football player suddenly depleted of size, strength, and speed; Gillan excels at the shy lack of self-worth that defines Martha despite being in a badass’ body; and Black riotously chews the scenery as Bethany complete with legitimately funny “dick” jokes and a worthwhile arc from vapid self-pity dictated by social media obsession to the confident, adventurous altruism hidden beneath. It’s body-switching at its finest with the juxtaposition of adolescent hang-ups and adult physicality rendering this seemingly unwanted sequel into a superior installment within the franchise’s high concept conceit.