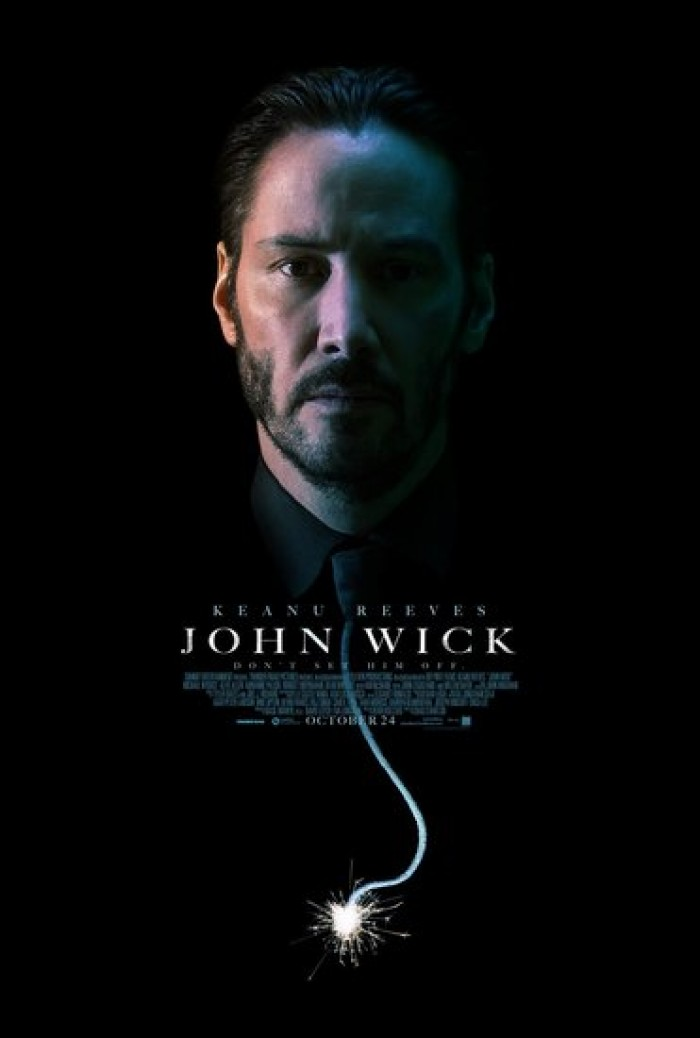 If ever there was a film you truly cannot judge by its cover, John Wick is it. We’re talking an action flick about a retired assassin played with stoic Zen by Keanu Reeves (the titular Wick) going on a killing spree against Viggo Tarasov’s (Michael Nyqvist) Russian mob syndicate because the crime boss’ son Iosef (Alfie Allen) stole his car and killed his dog. Sure there’s more emotional heft to this catalyzing event to not think Wick is entirely off his rocker with a willingness to scorch the earth for unwarranted reasons, but Derek Kolstad‘s script has fun reminding us how over-the-top it is nonetheless. Throw in a hotel doubling as a hitman sanctuary with its own gold coin currency and priceless code of honor and you’ll understand why some would think it a lousy waste of time.

Hopefully those that do still give it a shot because most will be won over by the high-octane action and brutal war rising from its conscious nonsense. It comes as no surprise that the first-time directors were stuntmen (Chad Stahelski is credited by himself on the poster and during the end scroll despite the internet telling me producer David Leitch assisted) because I haven’t seen fight scenes this punishing sinceThe Bourne Identity. There are cuts to help each choreographed sequence flow, but none are of the fast-paced MTV variety we’ve grown accustomed to over the years. There’s even one altercation between Reeves and an unnamed henchman that goes on for an unedited two-minutes of jockeying for position while brandishing a knife in a narrow hallway before the blade finally finds its mark. It’s exhilarating.

Accompanying these battles between Wick’s so-called Baba Yaga (translated as The Boogeyman despite the myth itself concerning an enigmatic old woman who haunted children’s nightmares) and the countless fodder for his bullets comes an intriguing yet also heavy-handed backstory about fate. The simple fact Wick crosses paths with Iosef is some sort of karmic destiny considering how we learn the former left the latter’s father’s employ with respect and honor to begin a new life away from the carnage. That they meet barely three days after his wife (Bridget Moynahan) passes from an illness proves all the more divine by delivering his grieving widower purpose. Who knows how many people he’d killed throughout the years or how long it’s been since he flexed those muscles last. With the present stakes being so personal, it’s as though he never left.

While this sounds like unceasing violence from start to finish, it does take a beat before that starting point arrives. First we must meet Wick and understand his pain as well as get acquainted with Iosef and his two idiot friends as random scum before the cards fall to reveal the intricate web Kolstad revels in showing us. Where run-of-the-mill fare would merely give us a tale of revenge and let both sides loose, John Wick takes care in laying forth its mythology about contract killers and the fraternity they inhabit. Each may be a lone wolf with anonymity and coldness serving as their resumes, but that doesn’t mean they all don’t know, respect, love, or hate the others depending on history or current mood. The dynamic between old school and new adds an interesting allegiance-based wrinkle too.

It’s here that characters like Willem Dafoe‘s Marcus and Adrianne Palicki‘s Ms. Perkins reside—assassins from different generations working with vastly different motivations. There’s also periphery folk like John Leguizamo‘s automobile chopper Aureilo, Ian McShane‘s rich overlord Winston who owns the aforementioned hotel, and that establishment’s concierge (Lance Reddick) existing on their own level with a wholly objective place in the game following rules above all else. They each come and go quickly, adding a zest of flavor that enhances the film’s environment above its central plot. In a way they are complex and intriguing enough to be worthy of standalone stories that expand the world as a stylistic creation rather than one man’s saga. This is a rarity for a genre hell-bent on single franchise commodities inevitably made boring through overuse and therefore one earning your attention.

A cornucopia of creatures as fun as they are vicious, there’s somehow always time for someone like Viggo’s crony Avi (Dean Winters) to entertain with his insecurity at needing to get his own hands dirty or head of security Kirill (Daniel Bernhardt) who proves Wick’s most competent adversary and someone able to hurt our hero in ways Hollywood fare generally forgets. Because although an opening scene glimpse of the end shows John breathing in the aftermath of everything before traveling back to the day of his wife’s funeral to watch the in-between, he can still get beaten and bloodied along the way. Or perhaps even skewered and shot until his enemies’ demises come at the price of his own. Just because you’re having fun with comic book sensibilities doesn’t mean you can’t add a sense of mortality to the mix.

John Wick has both in spades alongside a deliciously hammy villain from Nyqvist and consummate professional in Reeves’ antihero. The body count is huge, the shell casing cleanup extensive, and the bruise-forming impacts unrelenting. Having Leitch and Stahelski at the helm means those aspects occur with as much verisimilitude as possible in lieu of impossible explosions wiping out extras so as not to devote time to anyone besides those with a big enough paycheck to be on the poster. No, they ensure everything is steeped in authenticity whether artillery or hand-to-hand combat. Sometimes you must let the blade puncture your flesh to get the upper hand because it’s not always a matter of the script allowing you to win. The soldiers here are up to the task and each takes their licking until they can tick no more.