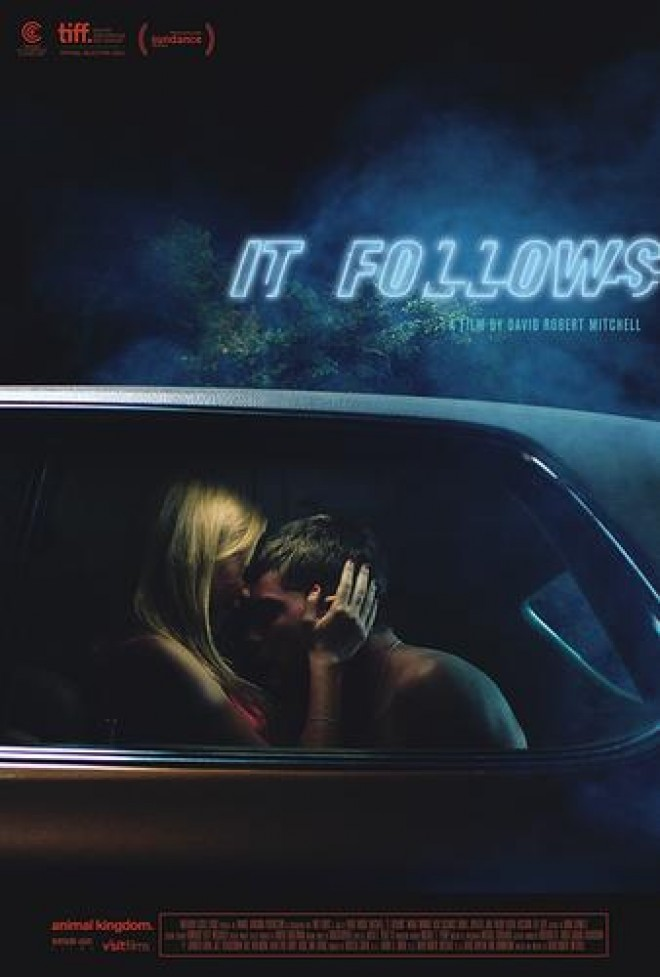 “How about that woman in the yellow dress?”

It was only a matter of time before horror literally made an STD monster. With the trope of sex leading to one’s demise so prevalent in the genre, it makes sense to create a predator that jumps from one potential victim to the next via intercourse. What makes David Robert Mitchell‘s It Follows more than a gimmick is his decision to ensure only those who’ve had the “bug” can see their pursuer. This means sex serves as the act to acquire your death sentence, the weapon to release it onto another, and the power to see it coming. You must face it alone, willfully play God with an unsuspecting stranger, or allow a volunteer to share in the prospect of an early grave for an additional pair of eyes with which to hopefully uncover a solution.

That’s a lot to take in for a co-ed who thought she was in love. Jay (Maika Monroe) knew boyfriend Hugh (Jake Weary) wanted to sleep with her, but he never pressed the issue. So they took it slow by going to the movies, having dinner, and more or less enjoying each other’s company like dating teens should. We know there’s something out there courtesy of a great cold open starring the terrified Annie (Bailey Spry) as she accepts her fate once the fatigue of avoiding it proves too much, but its identity is anyone’s guess until Hugh seals the deal. This provides a glimpse at the evil lurking, ceaselessly pacing with one goal: to grab its prey and kill it before moving down the line of past hosts who imagined they might finally be safe.

As soon as Rich Vreeland‘s (Disasterpeace) score enters, grating on your nerves, you know the sort of horror in store. Mitchell definitely harkens back to the golden age of John Carpenter and Wes Craven with unseen terrors lying in wait. We know what this supernatural entity can do after gazing upon young Annie’s twisted body and we know those running from it are capable of anything to put as much distance between it and them as possible. Let’s be honest, you’d freak out too if you saw some determined figure silently creeping towards you without pause. Sometimes it takes the form of someone you know, others it manifests out of your nightmares and/or fantasies. The fact it’s often naked helps you pick it out of a crowd, but it also renders the experience a lot more disturbing.

The whole invisibility aspect lets Mitchell and cinematographer Mike Gioulakis have some fun with their set-ups for maximum scares. There are a few instances where “It” is hidden behind a character’s head, visible for an instance when he or she moves so that we know of it’s presence and can anticipate how the rest will find out. Add in some effective special effects wherein everyone onscreen is engaging with something we cannot see and you’ll be jostled awake early with no desire to look away. Sometimes we see through Jay’s eyes at the creature and others with the vantage point of those lucky enough to not have to worry about their own safety. But that turns things more terrifying—the feeling of helplessness as someone you love is inexplicably attacked by thin air.

Only “It” does have a physical presence whether visible or not. It can shove heroic bystanders out of the way like ragdolls, hoist objects to throw into glass windows when no one comes to the door, and wrap its hands around the infected’s neck to gruesomely reacquire whatever part of itself is coursing inside his/her sex organs. And don’t think it is without the wits to survey a situation and take control. It will transform into whatever body is best suited for the task at hand and it will refuse to be trapped. Shooting it will drop it to its knees with a spurt of blood painting the wall behind, but it will keep getting back up until the job’s done. Having kids aim guns at nothing and pull the trigger supplies the perfect fodder for memorable visuals.

Mitchell writes in the usual stereotypical stable of kids with a fearless tough guy (Daniel Zovatto‘s Greg), caring sister (Lili Sepe‘s Kelly), lovesick puppy dog (Keir Gilchrist‘s Paul), and the otherwise unimportant friend who continuously spouts relevant passages of textual insight from a book on her electronic reader (Olivia Luccardi‘s Yara). Each plays his/her role by the numbers with subtle deviations to inject a bit of surprise as far as who survives and who doesn’t. There is a sense of strength in numbers, but quantity is meaningless unless everyone knows what it is they’re fighting. Pointing only goes so far before you run out of real estate and must book it for the nearest door. After all, leaving the others behind and prone to attack only keeps them safer since it will ignore them to continue following you.

Monroe is the centerpiece as a result, always in “Its” crosshairs as well as ours. Her Jay has her head on a constant swivel, slowly turning to spy down the road in all directions. This means she must look directly into the camera at us for at least a split second—the fear in her eyes as they lock with ours causing us to wonder whether she’s seeking our empathy or seeing us as the thing hunting her. We become a part of the action, left in the dark like her friends until the monster is made visible to purposefully agitate us more. Monroe is a frayed nerve throughout, unable to grasp what’s happening at first and then defenseless to doing anything but condemn someone else with her fate. There are no other options.