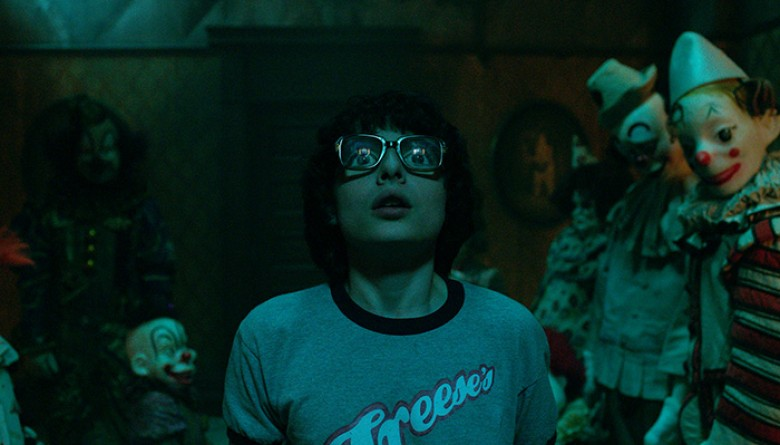 “Welcome to the Losers’ Club”

There was a lot said about the new cinematic adaptation of Stephen King’s It when Cary Fukunaga signed on a few years ago. Enough about him as a rising auteur capable of infusing some magic into a story so intrinsically tied to the Tim Curry-starring miniseries from 1990 that his departure for Mama director Andy Muschietti was met with groans. For me personally, however, the fact that a movie was still being made—and with an R-rating no less—was enough to stay excited. A lot of what fails in the previous version is due to its use of flashbacks as a storytelling device and the TV censor board. And if Mama proved anything it was that Muschietti has style. Pair that with a virtual blank check creatively and the potential was huge. I’m happy to say that the finished product lives up to the hype.

Fukunaga and Chase Palmer retain their screenwriting credits, but the notion of a quiet, atmospheric take devoid of the usual Hollywood scares has definitely been stifled in lieu of Annabelle scribe Gary Dauberman’s rewrite. Don’t take this truth as a slight, though, since the scares written in are effective in context with a chapter focusing solely on young children searching for the strength to conquer their fears. There’s still ample mood via aesthetic too, especially as it concerns Bill Skarsgård’s Pennywise. Rather than Curry’s humor earning chuckles, Skarsgård’s receives laughter rooted in discomfort. Between the make-up, anachronistically frilly costume, and perpetual drool falling from bottom lip, this performance will haunt people. The creepy fast motion jittering that surrounds his ever-static and in-focus face only adds to this unsettling demeanor.

We meet him, not in the present as he begins to feed again, but the past (or I guess this film’s present, considering flashbacks aren’t used). He’s in the sewer beckoning to young Georgie Denbrough (Jackson Robert Scott) with a balloon, the boy’s resulting disappearance triggering this latest period of terror in Derry, Maine. More follow in the ensuing months as the town settles in for what they subconsciously know arrives every twenty-seven years. But Georgie’s brother Bill (Jaeden Lieberher) refuses to give up hope. He doesn’t know any better. He doesn’t know his hometown’s history. So the need to gather his friends (coined “The Losers’ Club”) and check the sewers in the abandoned fields known as The Barrens is a noble one. They all pretty much know that the best case scenario is finding a body, but they do it for their friend. Inevitably they fall onto Pennywise’s radar.

Alongside Bill’s analytical mind as de facto leader are Eddie Kaspbrak’s (Jack Dylan Grazer) brave but paranoid germaphobe, Richie Tozier’s (Finn Wolfhard) loudmouth antagonizer, Stanley Uris’ (Wyatt Oleff) fearful follower, and “new kid” Ben Hanscom (Jeremy Ray Taylor). Their antics (and unfortunate common enemy in Nicholas Hamilton’s Henry Bowers’ bully) also bring Beverly Marsh (Sophia Lillis) and Mike Hanlon (Chosen Jacobs) into the mix. These seven fatefully stumble onto the mystery of “It” as more than simply a “dancing clown.” As “It” methodically starts to menace them each individually, they begin to realize this evil is a shapeshifter capable of knowing exactly what it is that cripples them psychologically. “It” preys on their fear to isolate, disarm, and consume them.

This is a necessary plot point for an adaptation completely devoted to these characters as kids because it shows that “It’s” power to stop them in their tracks is more than a shared traumatic memory. What grabs hold so viscerally is a personal trauma they must combat on their own. So the “things” chasing them are specifically linked to who they are rather than a singular predator on the hunt. “It” likes to play with its food and dismantle them emotionally before doing so physically. To say, “Why doesn’t it just kill him?!” is to miss the point of why King wrote “It” as a monster beyond one form. Pennywise is but a face to lure them in (despite its inability to ever understand why that particular face is hardly inviting). “It” seeks chaos and fuel. “It” seeks to endure the best way it knows how: with young loners so broken they cannot muster any resistance.

And that’s where the “Losers’ Club” as a construct is so crucial to the story of their adventure and its universal resonance. It’s through friendship (unlikely or not) that strength is built during childhood. It’s the person at your side fighting the same fight that you are that matures you beyond your years. They become each other’s hero simply by being there and experiencing the horror adults seemingly cannot. Whether or not this proves enough to save them is unknown. “Its” ability to divide and conquer has been honed through the years and this bunch may be more broken than most. What “It” misses is that their respective nightmares at home (mostly stemming from a lack of security or safety from the world or those living under the same roof) are more heinous than anything it can conjure. These kids know nothing if not survival.

So we watch as Muschietti haunts each one with lepers, blood, and the terrifying memory of loved ones lost. He dials up the dread until his latest victim cannot stand to look the other way anymore and only then does he let Pennywise in to drive home his connective tissue. The former span grotesque abominations and eerie atmosphere while the latter arrives with his janky walk and psychopathic gaze. The clown’s metamorphosis into the creature within is seamless and its “deadlights” are a pure hypnotic force that arrives as more than just show a la the miniseries. I’d say Muschietti takes a page from that adaptation’s director Tommy Lee Wallace in a couple instances, but the truth is probably that both merely adhered to King’s words.

That’s not to say that this is an exacting rendition of his prose from start to finish—even as someone who hasn’t read the book—since a lot has been updated. Whereas the adults lived in the '80s as written, the kids do now. So there’s an intentional Goonies-esque feel to the adventure with added time-specific details sprinkled in via movie theater marquees, hair styles, and music choice (New Kids on the Block fans rejoice). Characterizations follow suit, too as Bill takes on a Mikey vibe while Richie channels “Mouth.” I’ll use another movie to compare Beverly, though: The Wizard. I couldn’t stop thinking about Jenny Lewis every time Sophia Lillis was onscreen. Her mix of toughness and vulnerability steals the show almost exclusively throughout.

Lieberher is a standout as well, but he’s also the most experienced cast member. Wolfhard does well being obnoxious (a change of pace from his snarky but not so abrasive character in “Stranger Things”); Jacobs is great portraying the perpetual outsider forcing himself to join and listen to his heart rather than his grandfather’s voice; and Taylor is utterly charming in his unwavering innocence. It’s rare these days for a cast of unknowns to deliver as an authentic, natural ensemble, but these kids do. I’m almost sad Chapter Two has to find new cast members (unless Warner Bros. goes super literal and holds off until 2044). I saw myself in so many of them and if you don’t mind your kids hearing swear words and seeing copious amounts of gore, they may unlock some truths in themselves while watching.

When all is said and done, however, it’s Skarsgård who will be remembered most. Like Heath Ledger’s Joker, he has made this iconic character into something wholly new and menacing. With his cockeyed, slack-jawed stare, you find yourself unsure of everything he might do. At times it’s like he’s shut down, but these moments only fill us with more dread rather than grant reprieve. Muschetti plays with his scale often and ensures we never quite see “It” as a man more than corporeal illusion. And with new weapons (say goodbye to the slingshot), this reality is made more apparent with cracked abscesses as injuries. He will haunt you at full strength and while withering away.

The biggest improvement on its predecessor beyond these characterizations, however, is the way Muschetti handles the adults. Whereas Wallace kept them more or less docile in the background, Muschetti touches upon the notion of implicit complicity. It’s not that they let “It” do what it does or that they help it by turning a blind eye. It’s more about what they do out of fear that their child could be the next victim of tragedy. They do the math and make the sacrifice—sometimes through lies and the abuse of others—to keep them “safe.” The idea that letting “It” feed somehow provides Derry with a reprieve during the twenty-six years of its dormancy for those who survive isn’t easily shook. But no horror happening in plain sight ever is.