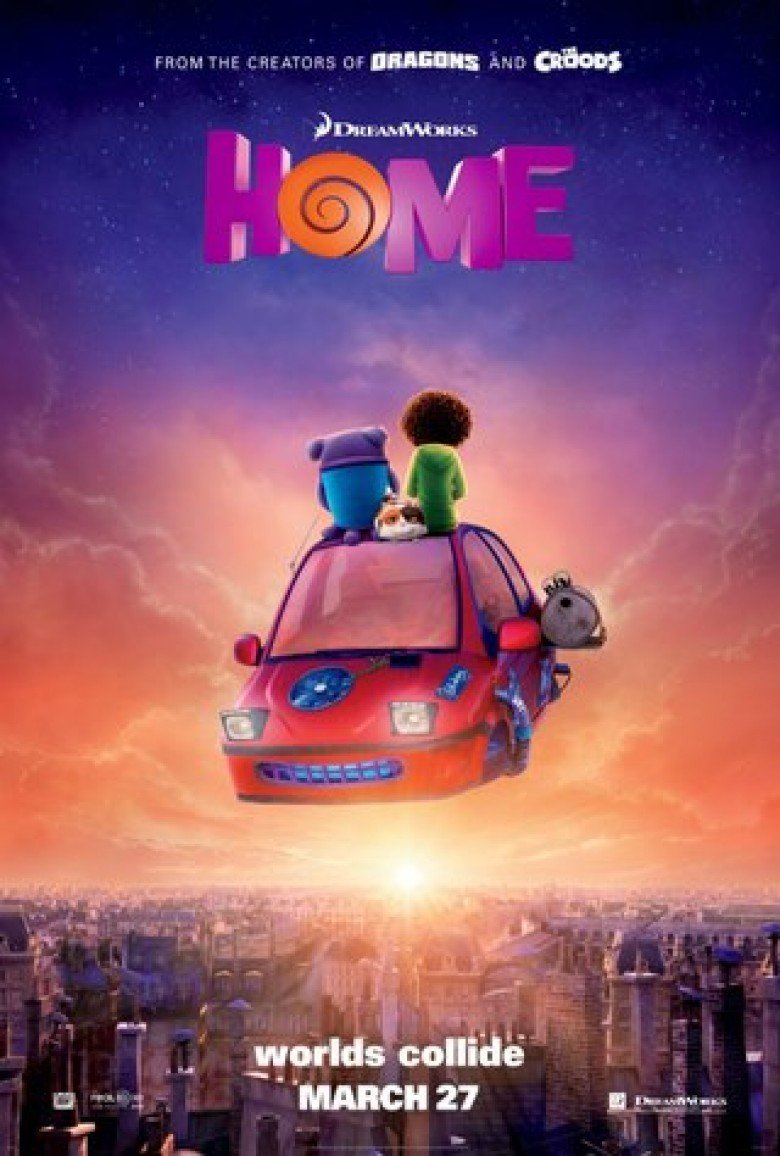 While it didn’t need help on its way to a fifty million dollar opening weekend,Home may have benefited from a G-rating. Its journey in search of family taken by Oh the Boov (Jim Parsons) and Tip the Human (Rihanna) skews very young in message and comedic style—unexpectedly so for me. So sweetly cute, it’s hard to think many children of PG-viewing age would find worth considering it’s slightly more juvenile than they’d admit is ‘cool’ in the presence of their peers. Only once they’ve graduated high school and became comfortable enough with their identities to admit enjoying a children’s film for sugary sentimentality and pun-filled awkwardness can it be graded at face value again. Tim Johnson‘s animated hit therefore does its job whether its ‘official’ demographic willingly admits so yet or not.

And this is coming from someone who hated the short film Almost Home that aired last year before two separate Dreamworks’ releases. In hindsight I loathed it mostly because it was an advertisement masquerading as a quality piece of cinema—something I don’t take lightly. It wasn’t too long that it couldn’t have debuted online as a bona fide trailer rather than in theaters under the guise of a self-contained entity. Thankfully we don’t have to watch it again at the beginning of this full-length sibling since that would only have added insult to injury. Instead the start actually proves my favorite part of the whole enterprise because it refuses to pander to expositional convention. We’ll gradually glean why the Boov have come to Earth, so there’s no reason to clutter their swift invasion in the meantime.

Placing the story in Oh’s perspective is key to this success. We aren’t given time or space to sympathize with humanity’s plight since we don’t know them until later. Our introduction is through Oh’s child-like broken English of incorrect plurals and verb tenses relaying that today—Moving Day—is the best day ever. We’re thrust into his species’ shoes with their cowardice moving them light years from their last planet, since destroyed by the evil Gorg, towards this new one. We watch with smiles on our faces as their spaceships release bubbles able to cut through concrete in order for giant vacuums to suck every human being out before giving him/her an ice cream cone en route to the Australian outback’s newly anointed “Happy Humantown”. Home is about the Boov discovering one, not our losing it.

Well, initially at least. It’s shortly after meeting Oh and genuinely feeling sorry for the curiosity that puts him at odds with the rest of his race—who don’t believe in closeness, relationships, fun, or bravery—that we notice “Pig” the cat slurping ice cream in the street before slinking through booby traps on his way back into Tip’s arms. Here is where the heartstring pulls really tug because little Gratuity Tucci is alone. A fluke in the Boov’s relocation protocol made it so her mother Lucy (Jennifer Lopez, whose casting is a fun in-joke for those familiar with Adam Rex‘s source material The True Meaning of Smekday) was taken while she unknowingly stayed behind. Desperate to find her, she grabs the car keys to escape inevitable capture.

Fate places her and Oh together as he too is on the run after accidentally sending a message to the Gorg with their exact coordinates just a few hours after Captain Smek (Steve Martin) declared Earth his Smekland. He needs her to get away and she needs help searching for her mother. It’s therefore off to Boov headquarters in Paris to accomplish both while Tip’s courage and love starts to rub off and open Oh’s eyes to the true meaning of life. He’s always questioned the Boov’s motivations whether realizing so or not, but now he’s able to understand how the legend of his fearful leader is a ruse hiding the truth of their kind’s failings. Things unsurprisingly escalate for all involved until it’s up to Oh and Tip to save the world from the Gorg.

There’s a lot to like about this sci-fi adventure, including the decision to make Tip Tucci a Barbados transplant. I won’t lie and say this fact didn’t impact its huge box office—almost twice what prognosticators guessed—because there were numerous internet posts in the lead-up about young minority girls seeing cardboard cut-outs of a heroine “just like them”. You can say this is a superficial byproduct, but don’t belittle the importance of its meaning. Caucasians aren’t going to be the majority in America for much longer and it’s great to see the entertainment industry finally acknowledging such in a way that doesn’t pander behind stereotype. BecauseHome isn’t about race, it’s about family and discovering its power through community rather than locale. This theme transcending labels means multiculturalism should be taught as early as possible.

The mirroring of Tip and Oh may not be explicitly developed—her being an immigrant is only briefly mentioned in passing—but it’s easy to see. Together they test themselves and the limits society projects upon them. Life’s full of misunderstandings and while the ones made on behalf of the Boov are gigantic, nothing’s too big to be forgiven. And through the friendship of these two fully fleshed-out beings comes gentle humor delighting in its language and visual cues, physical laughs in the animated design of an alien race changing colors like mood rings led by a hammy Martin, and a powerful emotional connection earning some tears. I may have zoned out a few times due to its blatant kid movie sensibilities, but I appreciate its ability to reach our youth in a meaningful way because of them.