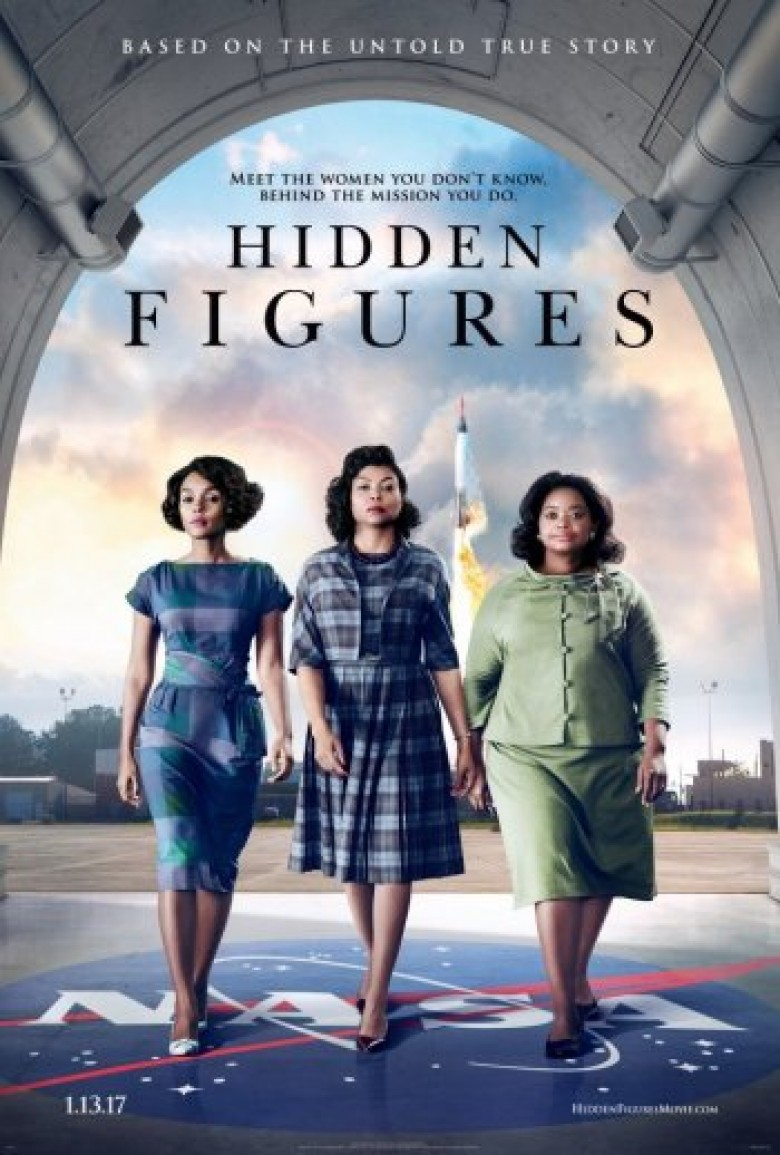 This is the film that math teachers throughout the nation have needed as an answer to each year’s smart aleck questioning, “When are we ever going to use this?” Push away the depressing nature of A Beautiful Mind‘s schizophrenia and The Man Who Knew Infinity‘s tragic end and let a true story of perseverance, intelligence, and hope take their place. Now when that smirking kid throws out his/her query as though he/she was the first to ever ask it, your reply can explain how math propelled humanity into space. Math put an American flag on the moon. And math pushed the US government further onto the path towards civil rights equality if only because its ego refused to let color and gender prevent a victory over Communist Russia.

The film is Hidden Figures: a tale of three black women who secured NASA’s status as the organization on the forefront of space travel. Katherine Johnson (Taraji P. Henson), Dorothy Vaughan (Octavia Spencer), and Mary Jackson (Janelle Monáe) were computers in the west wing at Langley in the 1960s, crunching numbers and proof-checking the work of mostly white men who may not have been smarter than them. It tells of Vaughan’s relentlessness to ensure her value as well as the initiative to know the supervisor job she performed like the back of her hand despite not officially being given the title. She sees the strengths of those under her supervision and places them each where they can best succeed. From there Katherine and Mary refuse to look back.

Theodore Melfi directs a script he and co-writer Allison Schroeder adapted from Margot Lee Shetterly‘s biography, a book only released three months ago itself (film rights were optioned in 2014, two years before publication). While it falls into usual biopic trappings, it never feels too familiar considering a uniquely positioned perspective able to inspire on multiple levels from race to gender to patriotism. It turns the mathematics into a device for suspense so it can’t bore us to the point of wondering why our focus isn’t on John Glenn (Glen Powell) and the other astronauts like most films of this ilk are. There’s more at stake here than simply shooting a manned rocket into the air. There are more boundaries to be eclipsed than just our atmosphere.

Enter the unwittingly stock oppressors to provide conflict before thawing towards empathy. There’s Dorothy’s boss Vivian Michael (Kirsten Dunst) constantly using broad statements meant to create a sense of kinship in their “we’re all over-worked and under-paid” mentality that instead seem specifically targeted as an air of superiority. There’s Katherine’s boss Al Harrison (Kevin Costner) who’s so wrapped up in the task of fulfilling their mission that he can’t open his eyes long enough to realize his best mathematician is handicapped in ways he couldn’t imagine. Add Katherine’s project manager Paul Stafford’s (Jim Parsons) respect for her work but not her as yet another unjust anchor to carry. And then watch as Mary literally fights Virginia to keep the dream of becoming NASA’s first female African American aerospace engineer alive.

Where the script lacks freshness in its gruff authoritarians pushing for civil rights changes that serve their purposes rather than show sympathy for those in need (it’s tough to commend characters for moral decency they should have possessed from the start), it does nicely shift the spotlight onto those making the most of the opportunity. Many films would cross the line and become about the whites in control allowing change. This one takes special pains to ensure it’s always about these women forcing it. Katherine, Dorothy, and Mary each become critical to their bosses’ teams because of the impressions they made on someone else. Nothing is handed to them; everything is earned. That’s a powerful distinction to be made and I believe Hidden Figures succeeds in doing so.

Melfi and company in turn provide young women new role models none of us knew existed and they do so in a PG-rated package so girls in Middle School yet to decide whether math or science are feasible trajectories can understand that they are. The film delivers examples of strong women that are able to get through to stereotypically stronger men (Mary may be half his size and twice as calm, but she has no problem making her militant husband Levi as played by Aldis Hodge slow down and know who’s boss). We also get a wonderful portrayal of a working mother of three precocious children mugging for the camera with Katherine’s ability to supply the love they need despite spending ungodly hours at the office changing the world.

But while Monáe bolsters her fantastic turn in Moonlight to prove she has the talent to leverage her music career into Hollywood and Henson pretty much assures an Oscar nomination with her heartfelt turn of courage and dignity, Spencer’s Dorothy is the character I cannot shake. From the opening scene showing her underneath their broken down car doing whatever’s necessary, we understand she’s the true ringleader of this bunch. She has the vision to provide opportunities for every black computer under her care and the fortitude to stand up and make sure those in control take note. We watch her teach her children important lessons about segregation as she performs an example of civil disobedience that’s able to put her onto a path towards erasing it.

There really isn’t a bad bone in the entire story whether that’s a testament to the truth or how Shetterly and the filmmakers bend it. The two characters we can be angry with (Parsons and Dunst) aren’t malicious as much as culturally blinded with a capacity for growth. Costner’s Harrison is so driven by the mission that we can’t like him or hate him. We simply respect that he won’t let archaic laws prevent him from assembling his team. Powell embodies Glenn as a charismatic cowboy with an ego the size of Texas and a heart that’s even bigger and Mahershala Ali (again like in Moonlight) brings a tough yet sensitive black male role model to life with an understanding of love and fatherhood Hollywood stereotyping rarely allows.

Hidden Figures isn’t the best film of the year or the most original in its construction, but it is perhaps one of the most important. It delivers an inspirational story of heroism without finding a need to inject additional dramatic conflict above the reality of what it meant to be black and female in the south during the 60s. That’s enough of an uphill battle to wage and just because these three women fight on different fronts in different ways doesn’t mean they aren’t fighting the same war. This is the type of stage that matters in our country—one where victory steeped in national pride allows prejudices to be ignored in the moment and hopefully erased in the aftermath. It’s the stage where humanity must look below the surface.