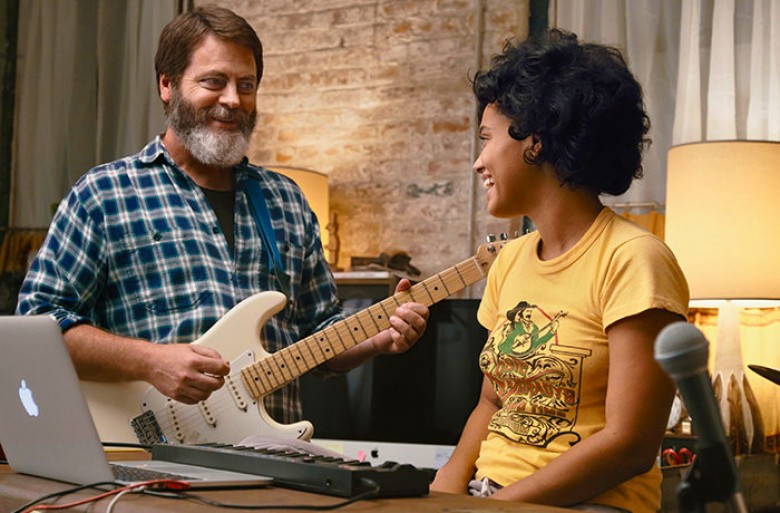 It’s often at extreme times of upheaval that we find ourselves taking stock of our life, ambitions, and loves. While working hard to be successful enough to support our families, we have a tendency of leaving our dreams by the wayside and/or compartmentalizing our identities to serve the unavoidable pressures of the present rather than hopes for the future. And on the flipside we can also youthfully avoid our basic human desire for compassion and interaction in order to maintain focus on career paths we’ve yet to start. So it’s no surprise that meeting Frank (Nick Offerman) and Sam Fisher (Kiersey Clemons) the summer before she leaves their New York home for sunny California means catching a glimpse of regrets, fantasies, and the melancholic acceptance of reality.

Brett Haley‘s (with co-writer Marc Basch) Hearts Beat Loud places his central characters on the precipice of a cliff gazing down upon oblivion as much as promise. Frank is ecstatic for his daughter and all she has accomplished to gain acceptance into UCLA’s pre-med program. But he also sees her drive for escape—either as a means for freedom or to leave the shadow Red Hook casts being the place her mother died—pushing her away from the electric vitality she possessed not so long ago. This is why he attempts to jumpstart the sense of play he knows remains. It’s why he cajoles her into a jam session to let off steam and be creative away from medical books and the stress of moving cross-country.

And he does it despite knowing his own life has hit a point of reevaluation. After seventeen years running a record shop in the area, increased rent and the introverted lifestyle of consumers shopping online have brought him to the end of that road. Or is it that he simply doesn’t have it in him anymore? Maybe this store casts the same shadow on Frank that Red Hook does on Sam considering he started it with his late wife after their child’s birth catalyzed a transition from performing music to selling it. His dream was always centered on hitting it big and thinks his daughter shares that same desire. But sometimes dreams are merely a means towards finding focus. Sometimes our aspirations in one direction lead us elsewhere.

So when that aforementioned jam session produces a single Frank submits to Spotify, he gleefully finds himself reliving the excitement of his youth. Sam on-the-other-hand sees any potential success it may yield as a distraction from the path she has set for herself. The question is whether the fun of writing music with her Dad will change her mind or reinforce it. Add an authentic introduction to love through NYC art major Rose (Sasha Lane) despite their relationship always coming with a clock counting down and she finds herself floating adrift, uncertain at the eleventh hour about where to turn. No matter what choice is made, however, this threat of being apart for the first time in their lives brings father and child closer than ever.

The result might be the feel good film of the year with an abundance of heart. There’s the drama of time breathing down their necks—dealing with Frank’s troublesome mother (Blythe Danner‘s Marianne), his reconciling feelings for his store’s landlord (Toni Collette‘s Leslie), and Sam finding the courage to let Rose teach her how to ride a bike (the meaning of which hits deep within her soul)—but also a release to embrace the moment, let off steam, and allow themselves a reason to smile despite the somber goodbye approaching. To create music is both a means to connect and reveal their innermost thoughts and struggles to themselves. This journey is a cathartic one traveled in tandem towards independent goals gradually coming into focus. And it’s sorely needed.

Besides one true songwriting session (to compose “Hearts Beat Loud”), the other musical moments occur in isolation. This isn’t Once with a man and woman falling for the other and putting their feelings into words. It’s a father and daughter searching for their respective shores as heavy emotions and insecurities weigh them down. So while they do help the other finish “Blink” and “Everything Must Go,” we don’t witness the spoils until a climactic performance. Instead we watch her acknowledge the war between education and love on her computer and him strum a guitar loop after a drunken night of painful confrontation. Sam wishes to fill the hole in her heart alone and Frank with her by his side. She learns she needs him and he to let her go.

And we fall in love with their performances and Haley’s ability to place his characters on a course ruled by resonant honesty. More than the next chapter in their lives, summer’s end asks them to close their current books and open new ones to grow along parallel paths that allow for necessary divergences. That’s a powerful message for parents and children alike, especially via a relationship example that fosters communication and understanding above mere disciplinary authority. Clemons and Offerman are unforgettable in that goal, each conquering the full spectrum of emotion to find common ground and the love to accept the other’s choices. Ends are also new beginnings—ones with the potential to right previous wrongs and refocus energies. In the face of futility, life provides them hope.