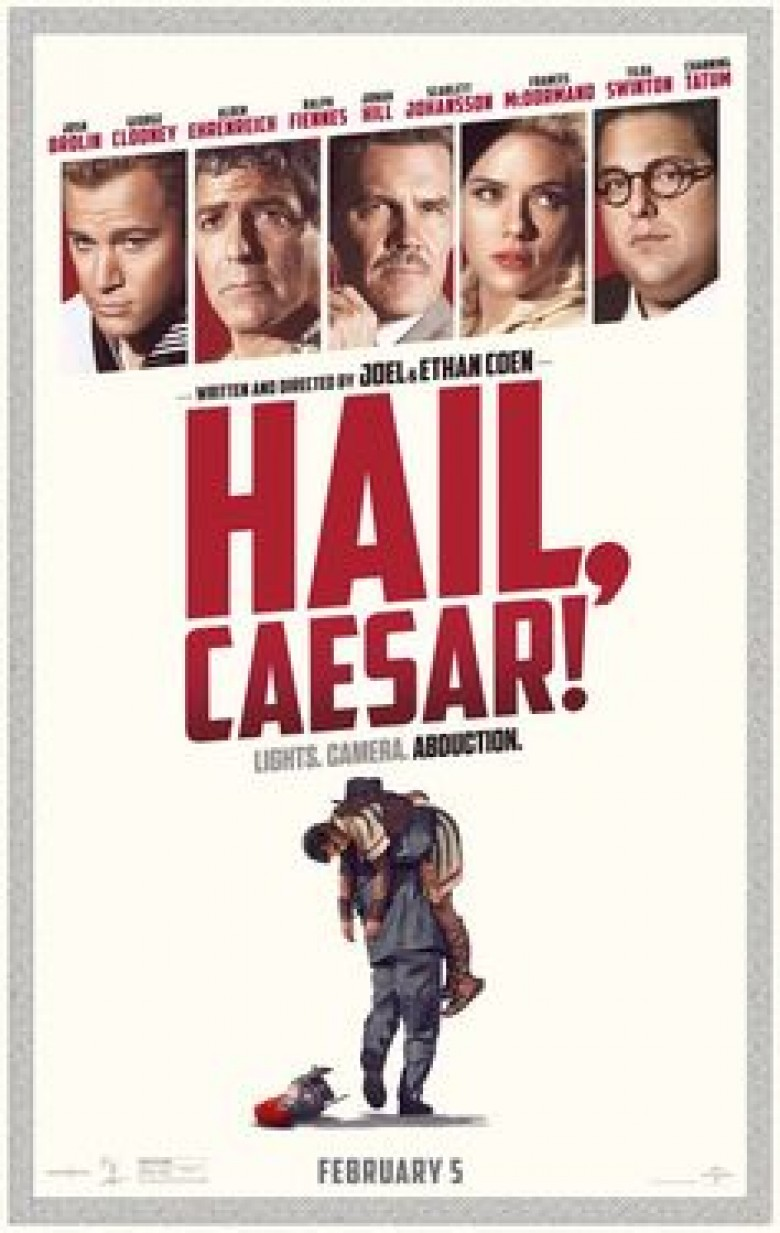 “It’s all in the hips, the lips, the eyes, and the thighs”

You don’t think much when you read the Coen Brothers have been bouncing Hail, Caesar! around since 2004. After all, they’re prolific auteurs that often write scripts for other directors, so a decade-long gestation period is nothing to scoff at. Only when you learn the idea was little more than an idea that you start wondering about the final product. Maybe they loved that initial pitch so much the words simply poured out over the last couple years. Or perhaps a window opened to fit it in and they didn’t necessarily spend as much time as they should have to truly make it pop. Did they rush the script through an era and focus change? I don’t know. Either way, this comedy could have used some tightening up.

That’s a hard realization because it’s extremely entertaining. Whether the period aesthetic, humorous send-up of a Hollywood adhering to studio-contracted talent, or the Coens’ comedic spin on religion and politics: there’s plenty to laugh at. Think A Serious Man but a blatant goofball cousin set within the capitalistically manufactured treasure trove of eccentrics known as La-La Land under a light, airy farcical tone as opposed to existential oppression. Its lead Eddie Mannix (Josh Brolin) is very much a kindred spirit to Larry Gopnik too: a pious, prideful man who loves his God but cherishes work most. Everything seems to be falling apart just as he’s offered a clean, lucrative escape, but that chaos is his lifeblood. The tortuous daily electric shock of disarray sustains him.

And if Hail, Caesar! continued to revolve around him while everything else fell to the background it would have been a fantastic little romp as seen through the eyes of a conductor willing his orchestra back from the brink of self-destructive paths. That’s not what happens, though. Instead the Coens look to make the film about Hollywood on the whole by adding more and more periphery characters to pursue while Mannix is left behind. I felt every moment Brolin wasn’t onscreen because each one exists as a sketch outside the main plot. Yes we need to know who these people are before the script can conveniently have them converge at the conclusion, but so many minutes are rendered as spectacle devoid of real purpose to that end.

I love random asides like Alden Ehrenreich‘s Hobie Doyle being plucked from genre Western fare that’s always hidden his lack of acting chops to a drama needing him to be someone other than himself. I could watch his rapport opposite put-upon director Laurence Laurentz (Ralph Fiennes) all day because it’s absolutely hilarious. Does Hobie’s entire image being carefully cultivated by the studio because he’s an attractive heartthrob despite his talented peers wanting him gone prove a necessary thread? Only as far as our knowing Mannix is spearheading the campaign as cheerleader for both sides smoothing over any animosity coming to a mutual understanding that makes everyone money provides. The rest is just for the joke—a joke we understood long before it comes to a close.

The same goes for Scarlett Johansson‘s pregnant but unwed DeeAnna Moran needing a public relations miracle only Mannix can provide. It’s one more absurd situation to keep Eddie frayed, but one whose point is made five minutes after it begins. There’s no need to bring her back or introduce the laconic Joseph Silverman (Jonah Hill) adding another quick verbal punch line once we’ve ceased caring. And if you really look at the film objectively you’ll see that the biggest laugh and possibly the best scene—Mannix with Frances McDormand‘s editor C.C. Calhoun in the editing bay—is totally expendable. It does supply the punch line of the long-running joke concerning Hobie’s acting prowess, but the character of C.C. is never seen or heard from again.

All this and I haven’t mentioned the main thrust of the story—or at least what the trailer purports it as. At the center is superstar Baird Whitlock (George Clooney) getting kidnapped by a group known as The Future. This whole concept is again deflection for more laughs despite the film probably being better off had we never seen it from his perspective. As far as Mannix is concerned, who kidnapped Baird or why is inconsequential to his duty of quietly retrieving him. The whole revisionist history allowing that the Hollywood black-list was actually onto something about Communists in the industry is delightfully wry and a perfect vehicle for Clooney to act the fool and David Krumholtz to yell at the camera. But to what end?

I get that this is supposed to fit next to O Brother, Where Art Thou? and Intolerable Cruelty as some sort of “Numbskull Trilogy” with Clooney because it does succeed on that level. I’d totally watch it again and bask in its sketch comedy skit nature, but it could have been so much more. Brolin expertly plays Mannix as the consummate straight man to everyone else and therefore the most intriguing. He’s the sane mind in an insane world putting out fires and throwing venom with a smile when needed because he loves his job. He’s the one person we truly care about once the whirlwind picks up steam and yet the others constantly overshadow him despite only proving important insofar as how they impact his trajectory.

So while I love The Future permeating Clooney’s impressionable sponge, Channing Tatum‘s Burt Gurney dancing up a storm in homage to Gene Kelly (a ten-minute ostentatious sequence to introduce his minor character with unearned fanfare), and Ehrenreich’s wholesome Boy Scout refusing to be altered by the harsh reality of Hollywood: it’s all superfluous. And maybe that’s the point. Maybe the whole endeavor was to have fun mocking themselves and their industry because Hollywood does take itself way too seriously. It’s excessive in its asides and tangents because reality is exactly the same. But while that renders the jokes hysterical, it doesn’t make Hail, Caesar! smart. Instead it’s a fluff piece with a ton of memorable parts that ultimately add up to an underwhelming whole.