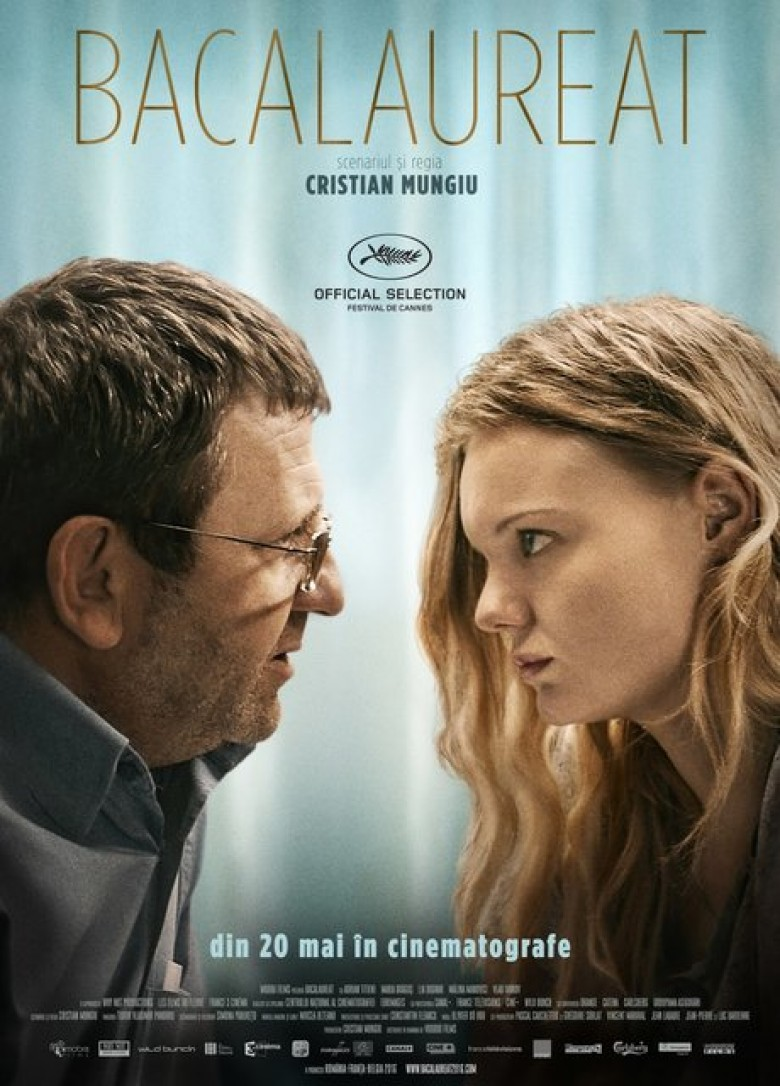 The amount of corruption to simply exist within the borders of Romania as displayed by Cristian Mungiu‘s Bacalaureat [Graduation] is insane. So much so that I feel bad admitting to what it reminded me of on a much more insidiously vile scale. Yes, it was nearly impossible not to see my hometown of Buffalo, New York as though looking in a mirror: the nepotism and the continuous promise of a future on the rise. It’s more than just Alexandra Davidescu‘s character talking about a reality wherein change for the better is impossible if all the bright young natives leave for greener pastures abroad too. That was Buffalo a decade ago. Things have shifted 180-degrees recently, but the notion that one’s success is all in whom you know remains.

As Mungiu tells it, living isn’t possible without compromising morals in some way. Do it once and the next time is easier until you’re living at the center of the law’s gray area. Your trepidation wanes and confidence increases as you realize everyone else is getting away with it. So why shouldn’t you? We’re not talking embezzling money, blackmailing someone in a position of power, or putting a hit out on an enemy standing in your way. No, Romeo (Adrian Titieni) would never intentionally hurt someone to get ahead. What we’re talking about are favors. You look the other way for me and I’ll do the same. You scratch my back and I’ll scratch yours in an infinite daisy chain running straight through the entire city.

And everyone knows it. Everyone is ready to run interference until the person they know and have exchanged favors with is ready to confront whatever troubling situation waits. There’s an intrinsic camaraderie wherein the simple airing of a problem can get another person in the room on the phone to contact the exact problem solver necessary to make it go away. You could say there is a true sense of community in this idea, but not one you seek out. No one wants to rely on favors, constantly wondering when they’ll get caught or when they won’t be able to make good on a promise. Sure it’s nice to know this system of paying it forward exists when you have nowhere else to turn, but it’s a Band-Aid.

Romeo and his wife Magda (Lia Bugnar) saw that this was what awaited them if they stayed in Transylvania, so they left. Just like many Buffalonians, however, they were drawn back shortly thereafter with a new lease on life and a handle on their vocations to try and make a difference. They thought they’d be the generation to put Romania back on track, but they were sadly mistaken. So a new cycle began like the last with parents positioning their children to escape. The compromises they vowed they’d never make are made in order for Eliza (Maria-Victoria Dragus) to remain innocent. They’d do what was necessary all while raising her to be honest. They’d bend the rules so she’d never have to and it actually worked.

If you’ve ever seen one of Mungiu’s heavy morality tales, though, you’ll know that being a foot from the finish line is still closer to losing everything than success. Eliza is a stride away—three exams that will be a piece of cake for a student like her—from a scholarship at Cambridge in the UK before it all starts to fall apart. Because in a world where shortcuts are the norm and corruption is ubiquitous, crime runs rampant. It could be little things or big, moral missteps or sinful deeds that cannot be forgiven. In a perfect storm of chaos and fate, the morning of the day before her exams holds a sexual assault that understandably shakes Eliza to her core. Should she heal or continue forward?

The answer is obvious: heal. That’s what any family would do in similar circumstances. But what of the bigger picture? What of the cruel reality that this may be Eliza’s only chance at becoming the person Romeo and Magda raised to be unbeholden to the white lies and traded favors that have transformed them into shells of who they thought they could have been? Up until this point the girl’s life was micromanaged—whether she was conscious of it or not—to follow this carefully planned out route. Romeo was the conductor and the decisions he made got her both on the cusp of excellence and the edge of oblivion. Because as we see right from the start, anything he does for others he does mainly for himself.

Graduation quickly becomes a commencement not for the student heading to college, but the father who’s devoted his life to ensuring it happens. Romeo loves his daughter and will miss her, but he knows her absence will be her salvation. And once she is gone he can begin to worry about himself again. He can devote his energies towards his mistress Sandra (Malina Manovici). He can start anew. But it isn’t that easy. Karma has a way of looping back around when you least expect it and when it’s least wanted. Shortcuts are taken for selfish reasons and people Romeo is blind to even believing could be affected by his actions are hurt as collateral damage. Love drives his every move, but that doesn’t make it right.

What follows are three days portraying just how easily things unravel. Romeo isn’t a saint by any means, but he’s never involved his daughter explicitly in anything he’s done. Because he was in a hurry to see Sandra, however, he dropped Eliza off a block from school. From there her boyfriend Marius (Rares Andrici) is late. The attack occurs. Romeo enlists his Police Inspector friend for help (Vlad Ivanov). And he in turn asks Romeo to use his position as a doctor to assist someone else in need (Petre Ciubotaru‘s Bulai). Dominoes begin falling as more start rising up in their place. A conspiracy is invoked in a way that Romeo can no longer hide what he’s willing to do from Eliza (or pretend she doesn’t already know).

It’s a stirring performance from Titieni that holds everything together—his mix of guilt and uncertainty in action but courage and confidence in results forcing you to wonder if the purpose is worth the process. Mungiu throws so much his way that seems coincidental when you step far enough away back, but he never lets you. On the contrary, Graduation starts to feel claustrophobic as the walls close in to apply pressure onto Romeo as though a vice. He knows the potential consequences of what he’s doing and yet he does it anyway. And the responses by those he must involve are never less than authentic. It’s ostensibly a series of blackmails amorally appealing to one’s sense of compassion. As a parent, how could you do anything less?