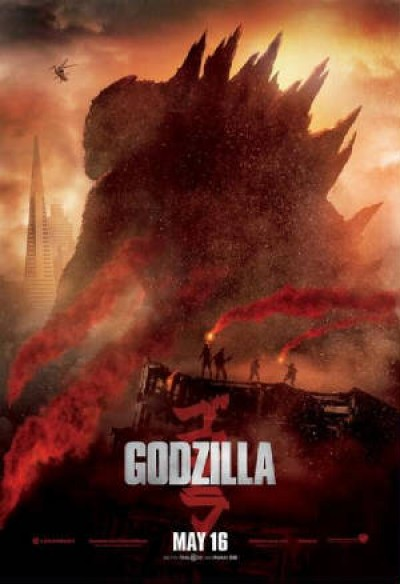 The reason Gareth Edwards‘ rebooted Godzilla proves so effective is that it retains the thematic essence of its 1954 ancestor, Gojira. Still an over-arching metaphor for mankind’s hubris and wont to destroy everything it doesn’t understand out of fear, Dave Callaham, Max Borenstein, and multiple script doctors simply found ways to alter the DNA so it could be relevant for an American demographic rather than Japanese. I’ll be honest: we aren’t a country that enjoys watching foreign lands painted as the victim while we look on with self-righteousness in full knowledge of orchestrating their pain. So the giant beast’s origins are tweaked to make US forces in the 50s heroes, each bomb dropped in the Pacific done in hopes of killing the creature they kept under wraps from the public. Always present in the deep, we are no longer his creators.

Even so, however, our unchecked drive for scientific discovery through a necessary curiosity plays a role in a slightly different manner. Scientists like Dr. Ichiro Serizawa (Ken Watanabe) and Vivienne Graham (Sally Hawkins) devote their research to uncovering the mystery of Godzilla as far as where he came from, where he goes, and what his purpose on Earth truly is. So they journey across the planet in hopes of finding evidence, stumbling upon a massive specimen fossilized underneath the ground in the Philippines. Cavalierly playing with fire as members of the private sector with their organization Monarch, they kept mum on the titular subject of Japanese lore and the remains of a monster much older than even he. The result was a nuclear meltdown of epic proportions and the planting of the first seed towards what was to come.

This means the push and pull of science against military might remains at the forefront of the philosophical debate this science fiction horror property has possessed from the start. The difference is that it’s now America’s problem to rectify what was covered up by bureaucratic red tape and redacted documentation. We’re the ones faced with the utilitarian decision to compromise even if it means dropping a payload that will make Hiroshima and Nagasaki appear like a fireworks display in comparison. A question of faith arrives to ask whether we’ll let history repeat itself or find the strength to let Mother Nature run its course. Because in its most stunning transformation—that I know of after only seeing the original Toho production—Godzilla might actually be our savior, a cosmic security guard at the ready to ensure a balance we can’t begin to comprehend.

Who must weigh these facts and risk their life to save the world from utter disaster? That duty falls to Ford Brody (Aaron Taylor-Johnson), an Explosive Ordnance Disposal Army Lieutenant residing in San Francisco with wife Elle (Elizabeth Olsen) and son Sam (Carson Bolde). He isn’t some random dude with stellar luck, however. No, he has permanent history with the chain of events leading to the clash of titans threatening wholesale extermination and colossal destruction. He was a boy when the aforementioned nuclear plant melted down with parents (Bryan Cranston and Juliette Binoche) employed within. That tragedy shaped his and his father’s future, placing them at ground zero fifteen years later when all hell breaks loose. And like every Hollywood adventure of carefully constructed coincidence, Ford cannot escape his position on the front lines throughout.

Borenstein et al. therefore gives us two avenues with which to enter—the human element of a father fighting for his family’s survival and the action-packed excitement of skyscraper-sized behemoths warring as onlookers scramble to safety. Each works well in and of itself while still finding a way to intersect and provide one another a source of propulsion. It’s through Ford’s eyes that we meet Admiral Stenz (David Strathairn) and Captain Hampton (Richard T. Jones), two men introducing us to the harsh pragmatism of protecting the many above the few and it’s through Godzilla’s that we recognize the hope and selfless compassion necessary to not only survive the present fight, but also anything the future holds. The storylines are one and the same: a man protecting those he loves and a creature enforcing an ancient order.

And all the while Gareth Edwards renders his shots in ways that provide the best vantage point for seeing every breathtaking special effect his team exuberantly throws our way. Gone are the contrast barriers of 1954 superimposition, replaced by seamless computer graphics adding dense smoke, authentically interactive monsters, and a level of concrete carnage to rival Man of Steel. He sets the atmospheric mood by shrouding truth in secrecy and reality in shadows. Insect-like beasts evolve from glowing red cocoons of electromagnetic potential to Cloverfield-esque praying mantises; Godzilla from spikes in the water to a dinosaur of epic proportions with a perpetual trick up its sleeve. And when Edwards needs some carnage without usurping the human story, he expertly frames Ford’s escape through closing doors in the foreground with a slivered opening showing the split second when two creatures collide.

Add to this visual bravado a magnificent sound design alternating from Alexandre Desplat‘s score to the deafening silence of gas masks to the metal on metal shriek of monsters and your heart pounds from suspense rather than horror. This is the most realistic depiction of Godzilla we’ve seen yet, a massive undertaking years in the making Roland Emmerich‘s hiccup almost derailed for good. Fanboys hooted and applauded as though the beast could feed off their excitement, soaking up Taylor-Johnson’s understated soldier desperately trying to return home while finishing the quest he believed turned his father insane. It’s not as fun as Pacific Rim or as fresh as Cloverfield (while utilizing elements of each), but it’s almost as good thanks to treating Godzilla as character battling alongside the story rather than bombastically supplanting it.