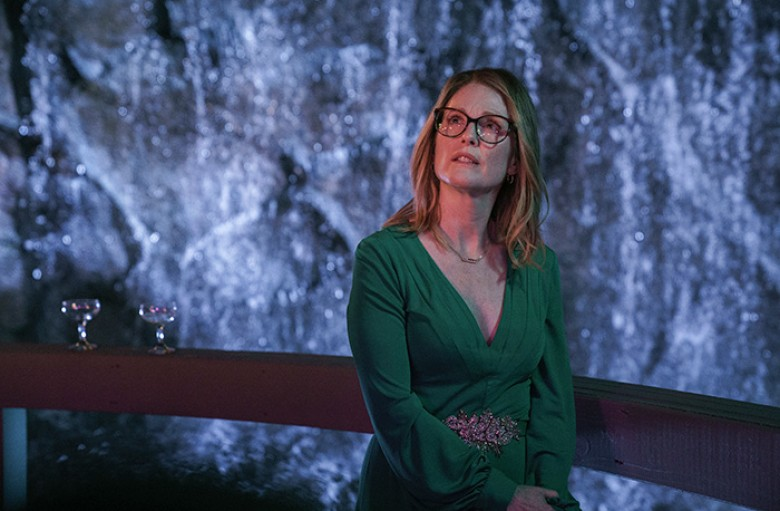 Julianne Moore Photo by Hilary Bronwyn Gayle, courtesy of A24
- Share this page -

“We could all die tomorrow”

I hate the argument that remakes of foreign films allow English-speakers to invest more in the story and performance because they aren’t dividing attention between dialogue and imagery, but I can’t deny some validity to the thought. There’s more to it than just what you hear, though, because a new environment also brings new context. But so does a subsequent viewing of the original. A second viewing provides something the first couldn’t because you are different while watching—emotionally, energetically, etc. So we ultimately appreciate some aspects more or less than before. How we arrive to a film will always be subjective to that exact moment and thus changing the whole into a totally different product regardless of its similarities is merely one more weight-carrying factor.

It’s therefore interesting to look at Sebastián Lelio‘s Gloria Bell considering it is almost identical in structure to his own original film Gloria. The scene progressions never miss a beat and neither do the characters’ actions. Besides an additional depth to who Gloria (Julianne Moore) is at her job, we’re not receiving anything different visually (changed aesthetics notwithstanding). All that’s new then is the subtraction of subtitles for non-Spanish-speaking viewers and a revamped contextual relevance for conversations including US-specific politics, colloquialisms, and attitudes. Lelio has transposed his Chilean heroine to America and let this alternate version experience the exact same sense of loneliness and empowerment with her heritage’s unique cultural color. Is that enough to warrant going back to the same well? I guess for him it was.

The idea was born from Moore’s adoration of the original and star Paulina García‘s magnificent turn. Praise moves to a desire to work together and eventually the decision to see what five years of space, a new backdrop, and a fresh performance could change. This isn’t about improving, but adapting. On those merits I have to give them a round of applause because that sort of exercise is intriguing to tackle (see Michael Haneke‘s Funny Games and Gus Van Sant‘s Psycho). Only when you bring in box office receipts do things get shaky because your artistic experiment now enters the realm of capitalistic viability. It’s impossible to dismiss accusations that a double-dip becomes a cash-grab because that’s exactly what it is from a financial, studio position.

To strip away that background is to ignore the truth of commodification regardless of whether monetary success crossed the mind of the creatives. It would be different for an outsider to say he/she can add something to the work and make it his/her own. To set out and do the same thing again is therefore more a personal challenge that distributors pounce on because of what it could earn them. And let’s face it: Julianne Moore will get butts in seats. Lelio wouldn’t have ostensibly gone backwards to do this without someone of her caliber getting him excited about the endeavor’s possibilities. She’s why this film got made because her value gave his Oscar-winning adjacent status (A Fantastic Woman) the resources to remake something that’s still so fresh.

And while I’m not certain we needed this second go-round, Gloria Bell does separate itself from its predecessor. Perhaps it’s a result of my ignorance of Chilean life or my having to read English subtitles, but watching Moore traverse the same minefields seems so much sadder than before. Where I read García’s character as already having found the self-awareness and strength to live her life for herself, Moore still seems to be finding that freedom. The latter is so entrenched in America’s patriarchy that her concessions to the men around her feel more like acquiescence than caution-to-the-wind desire. She possesses a melancholy where García embraced a more confrontational nature. I can’t help thinking the Americanization made this possible—our pervasive sense that women over fifty are invisible.

The put upon entitlement of the men is also more overt here as a result. Where I had pitied the son (Pedro) for having to take care of his infant alone, we want to smack this iteration in the face. Michael Cera‘s Peter exudes a tone of superiority when he mocks his wife’s choice to “find herself.” Rather than appear fatigued by being a single parent, he angrily refuses help because he wants to play the martyr. This same self-immolation comes through Gloria’s ex-husband (Brad Garrett) and her new boyfriend Arnold (John Turturro), but again more than their Chilean counterparts. There’s this edge that wasn’t present in 2013—one driven by our nation’s penchant for being loud, uncompromising, and hyper-masculine. These men feel more dangerous via their nationality.

And that infers upon Moore’s character because she’s been trained to diffuse that rage at the detriment of her own agency. Where García appeared to have had her eyes opened to the childishness of men long ago, Moore’s Gloria is discovering it right now with Arnold’s inability to shed himself of his psychological hang-ups and embrace her as the love he tells her she is. Suddenly the sensitivity provided by her daughter Anne’s (Caren Pistorius) boyfriend Theo (Jesse Erwin) becomes a direct contrast to the more ownership-tinted dynamic of Garrett, Turturro, and Cera. Gloria now has an example of true love where a man gives himself to the relationship rather than just the sex it provides. She sees a light of hope where only darkness had been visible.

The whole becomes much more dramatic in the process because Gloria is fluctuating between who she was and who she’s evolving into. Moore has these great moments where she stops while in the throes of dance and exhilaration to turn contemplative and sad before reclaiming the joy of the moment. Does it lead to a better achievement than García? No. It’s so surprisingly different that “better” doesn’t really come into play. I’ll instead say they are equally important and great in the context of their versions. García was sharper in a funnier film and Moore subdued in a more powerfully moving one. The latter is therefore the outsider coming in to make this film her own. So while the movie might not be necessary, Moore’s performance surely is.