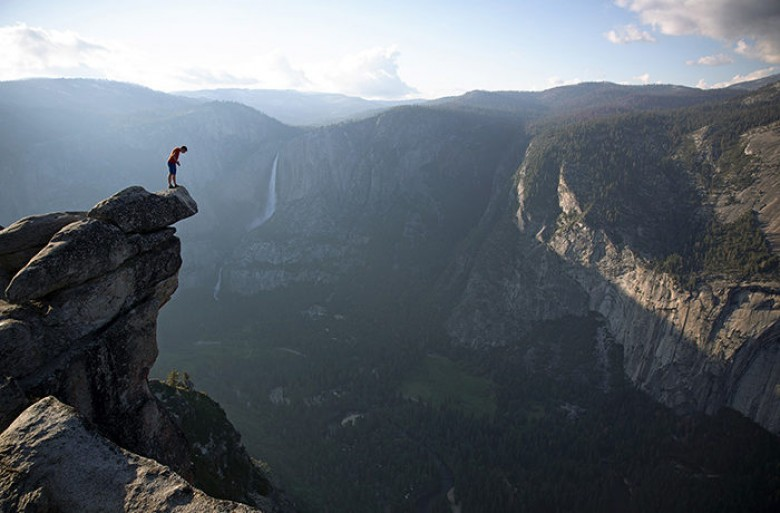 “I realize my body would just explode on impact”

Free climbing a mountain wall at any height is insane to me. So watching Alex Honnold gaze upon El Capitan with the simultaneous declarations that it scares the crap out of him and that conquering it without rope would be his ultimate goal makes me shudder. I’m all for hiking mountains like Whiteface in the Adirondacks or Mount Adams in New Hampshire because it's fun to strap on a backpack with friends and embark on an adventure. Hand-over-hand gymnastics up sheer granite as slippery as glass in some places without a single security measure other than confidence, though? Really? It doesn’t matter that Honnold had successfully completed similar feats before. This would be 1,000 feet farther than his last go, with additional stakes he’d never before faced.

It shouldn’t be surprising that the team to capture this journey up the former namesake of Apple’s OS was Jimmy Chin and Elizabeth Chai Vasarhelyi—the duo behind the acclaimed Meruwherein Chin was a subject himself. He’s back, in front of the camera this time, with a minor role as one of the many experienced climbers who agreed to act as cinematographers, a job I must commend the filmmakers for not glossing over as mere flies on the wall. These guys are volunteering to place themselves in the front row of their friend’s death if he slips just once along a nearly five-hour ascent. Think about the headspace you must occupy to do something like that. We’re talking negligent levels of cooperation.

This is why the first two-thirds of Free Solo proves to be so fascinating without having the harrowing climb itself to glue us to our seats. Rather than just focus on Honnold himself—a man with the right amount of cockiness and acceptance of his mortality to get this done—the filmmakers pull back to provide context for the myriad moving parts surrounding him. There’s his buddy Tommy Caldwell who agrees to help him train knowing Alex’s death will be easier to take if they did everything they could to prepare him for success. There’s the crew, reconciling their complicity in the act; colleagues who plummeted to their own demise on other mountains during the course of filming; and the love (or “appreciation” as Alex’s robotic stoicism labels it).

That last part is brand new to the equation. Although never to this extent, Alex has been filmed climbing previously. Having an audience like this will definitely change his mindset and force him to further strengthen mind, body, and soul, but it’s nothing compared to someone like Sanni McCandless wondering if he’ll ever come back. There’s a catch, though: Alex isn’t your “normal” 30-something. We watch this relationship blossom on the sidelines of his mission and know it’s meaningful, but he never pretends she’s more important than the mountain. Period. Alex’s mother talks about her late husband probably being on the autism spectrum, and it’s not difficult to wonder if her son is, too. Honnold gets an MRI during production and his amygdala stays silent the whole time.

This explains a lot about his personality, since the expression “he has ice in his veins” could have been coined in his honor. I’d argue that this is exactly why he’s so focused when clinging to the tiniest of variations with nothing but thumbs and heels. And what’s even better is his ability to recognize just how great a maneuver was in the moment by turning to a camera to smile before getting right back to work. Alex’s lack of emotion has admittedly ruined many past relationships, and we see the toll it takes on Sanni here, but you get the sense that knowing him will reveal his reactions to be less absent than extremely nuanced. That which seems callous on the surface is merely pragmatism.

Maybe it’s a defense mechanism, or perhaps it’s just the guy who Alex is. Maybe something like marriage or children will click and change his mentality as far as free soloing is concerned, or perhaps he’ll keep finding crazier and crazier walls until he falling and joins so many others who did the same before him. We listen to his friends voice concerns and lament how Alex is probably the most at-risk climber of anyone out there today. But to then hear him talk about being ready to die despite not wanting to die provides some level of comfort. Listening to his reasoning for soloing (without cameras) as a means of insulating loved ones from the act of dying itself is almost laudable. Alex has intellectualized each step forward.

By removing any “extreme for extreme sake” motivations from the conversation, Free Solo‘s climax becomes a breathtaking, vertigo-inducing, edge-of-your-seat thrill ride. Chin and Vasarhelyi crafted this tale with expert precision so that we’re on the sidelines with them. We become entrenched in this world: embracing our fears alongside the cameramen, empathizing with Sanni’s struggle to be supportive, and finding ourselves pulling for Alex to make the attempt, regardless of the outcome because quitting would only lead to regret. Knowing the result makes it easy for us to keep our eyes open for the spectacle, but there’s nothing more relatable or human than seeing Mikey Schaefer shield his vision at every new pitch. History is made during the final 20 minutes, but those first 80 minutes deliver the true meaning of what is accomplished.