Review: Fantastic Beasts And Where To Find Them (2016) 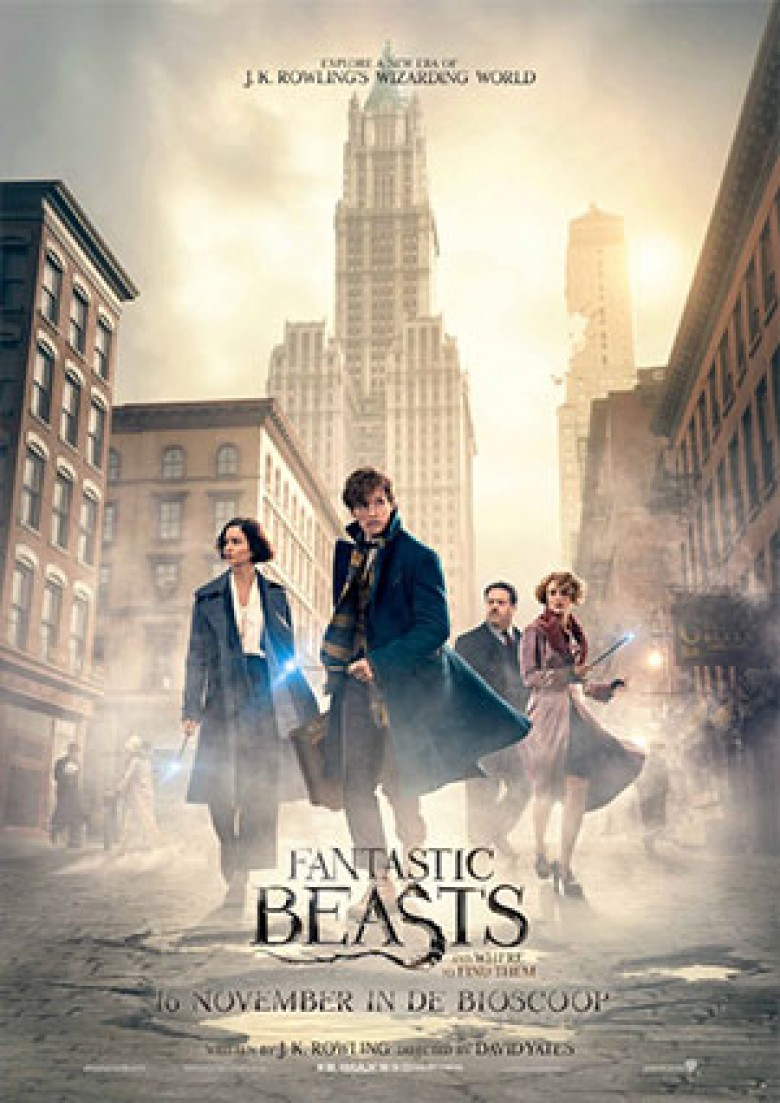 After seven books, eight movies, and a play, the Harry Potter universe has become an expansive property no one wants to see die. Pottermore kept the fandom alive online with exclusive stories and quizzes bringing you into Hogwarts while author J.K. Rowling‘s textbooks added flavor and raised over seventeen million pounds for charity. So it was a no-brainer when Warner Bros. asked her for more. The question simply became how to do it. How could you retain the level of excitement and wonder to acquire new fans and please old without returning to the same exact well at the risk of destroying the magic? Not only does she turn the clock back seventy years, she also leaves school behind for an adult world of wizards and Muggles together.

This was what hooked me as far as Fantastic Beasts and Where to Find Them is concerned. No disrespect to Dumbledore’s Army, but we’ve already experienced what it’s like to grow up as a witch or wizard in a monument of magical lore such as Hogwarts. It’s time to branch out and explore more. Take this British-fueled property—if I’m not mistaken, you couldn’t be cast in a Harry Potter film unless you were British—and bring it into New York City. Treat us with legends spoken only through memory and whisper like the villainous Gellert Grindelwald or through text like magizoologist Newt Scamander. Bring them to life inside an era of strained relationships, archaic laws, and the germ of a Death Eater-like revolt for power.

Here’s the issue: that type of environment is much larger than a school. Rowling more or less spent three books/films getting readers/viewers used to a specific locale before expanding outward to 12 Grimmauld Place, the Durmstrang Institute, etc. She allowed us to get to know her characters and watch them evolve into heroes beyond Hogwart’s walls. Well, New York City is a bit more complex a starting point. The good thing is that our main character Scamander (Eddie Redmayne) is almost as unversed as us. We can therefore piggyback onto his experiences of learning about the Second Salemers, the Magical Congress of the United States of America (MACUSA), and the strict separation of wizards/witches from No-Majs (the American term for Muggle). But it’s still a lot to process.

What occurs as a result is a prologue of exposition with little meat to dig into. Don’t get me wrong, there’s a semblance of plot as Scamander’s adventure to recover his escaped “beasts” (his journey to America surrounds releasing a reclaimed animal originating in Arizona he found in Egypt) parallels a mysterious destruction wreaking havoc that Auror Graves (Colin Farrell) investigates. Add the vehement dissent of magic courtesy of a stereotypically abusive adoptive mother of urchins in Mary Lou (Samantha Morton) to introduce politics (Jon Voight‘s Henry Shaw, Sr.’s newspaper calling her a crackpot while touting his son as the next POTUS) and an ancient evil known as an Obscurial which lives inside children who’ve suppressed their magic to the point of it gaining full bodily control.

Sadly nothing really comes of any of this except for a convergence setting up future conflict in the four (yes, four) planned sequels. How it unfolds to reveal easily decipherable surprises leads us towards some amazing special effects, deliciously creepy performances from Mary Lou’s “kids” (Ezra Miller‘s Credence, Jenn Murray‘s Chastity, and Faith Wood-Blagrove‘s Modesty), and unintentional laughter courtesy of the recently-spoiled inclusion of Johnny Depp. But all we truly receive is a firmer grasp on who can be trusted and who cannot. There are also some deaths to combat (the PG-13 rating is no joke as David Yates continues his dark streak after directing the final four Harry Potter installments), but all are contained within the smaller-scale story that must end so the real adventure can begin.

Fantastic Beasts is as much a way to ease us into this new setting as ease Rowling into her new role as screenwriter rather than author. This is new territory for everyone and it does show thanks to a runtime that’s maybe twenty or so minutes too long. Just because the title speaks towards the “beasts” doesn’t mean we need to spend extensive time inside Scamander’s suitcase to meet a bunch that have no bearing on the film itself. There are more than a couple instances of grandeur hoping to mask a flimsy plot we’ve guessed very early on and they can get trying. Luckily they are also beautiful to behold with expert animation merging artificial creatures and reality for some welcome physical humor (the Niffler is hilarious).

Redmayne is a huge part of this success as he imbues Scamander with a childlike innocence and intense empathy often getting him into trouble. He’s an unassuming outsider with a potential only Albus Dumbledore can see (enter the Harry Potter allusions) and courage ready to be unleashed when the moment arises. It’s therefore no surprise when disgraced Auror turned Investigator Tina Goldstein (Katherine Waterston) sees his indiscretions as a way to earn back respect from MACUSA President Picquery (Carmen Ejogo in a wasted role that never earns the air of superiority her performance demands) or when No-Maj Jacob Kowalski (Dan Fogler) takes a shine to him as a friend. How this trio (with Alison Sudol as Tina’s sister Queenie adding much needed optimism) grows together is a highlight.

The lowlight is the decision to computerize the goblins. The effect is reminiscent to the Star Wars prequels as practical effects made way towards glossy cartoon. I had hoped it was just going to be the awkward goblin-fication of a speakeasy lounge singer, but then the gangster Gnarlack appeared with Ron Perlman‘s trademarked jaw to make me question whether my awe at the animation of the “beasts” was unwarranted (it wasn’t). It’s a small quibble, but one that did take me out of the fantasy to remember I was watching a movie (similar to Depp’s star-power recognition revealed in a way that spotlights his celebrity more than his character’s infamy). It also doesn’t help that New York feels like London throughout despite accents trying hard to trick us.

In the end, though, these surface issues don’t ruin the magic of being back in Rowling’s universe. The film may not give us much to grab hold of besides four selfless characters I do look forward to seeing again (with as much humor, smarts, and ferocity as Harry, Ron, and Hermoine), but it does its job of acclimating viewers like a five-part epic’s prologue should. More appetizer than main course, its motivation is to entertain and prepare. Now that Step One is out of the way, Rowling and Yates (who has already been tapped to direct the rest) can get down to business moving forward. So give them the benefit of the doubt. Enjoy this one for its pieces and hope everything comes together in 2018.