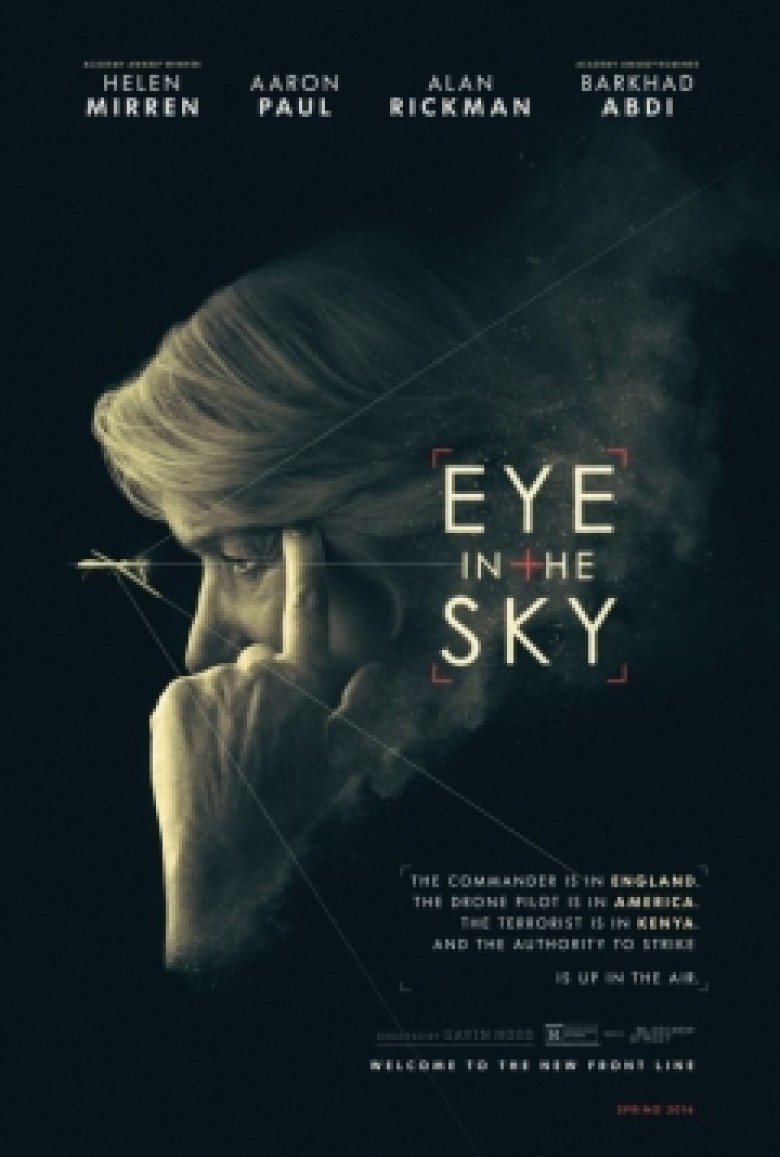 How do you simultaneously become hero and martyr in twenty-first century warfare? You find yourself unwittingly lodged within the kill zone of a high value target that has been confirmed without a shadow of a doubt. Death or injury earns you both labels for your people. To die as collateral damage is to potentially radicalize more and more jihadists who may or may not prove more volatile than the ones murdered in the incident. But when actual terrorists who have thought nothing of collateral damage themselves perish in the same blast, well then you’ve also saved countless hypothetical lives by dying instead of them. The question now becomes whether or not someone else (us) has the moral right to provide you such a distinction without your approval.

This is the scenario our armed forces go through daily—wading through math equations projecting assumed damage to compare with a speculated future that might be worse. ScreenwriterGuy Hibbert pulls no punches manufacturing every single hiccup possible in such a situation with Eye in the Sky and director Gavin Hood amps up the suspense by portraying it all from the edges of military and political seats occupied by men and women second-guessing their own authority so as not to destroy careers or the program in the process. He’s not playing games with cloak and dagger voices or half-truths about supposed identities and risk assessments. He puts the scum of the earth in the crosshairs and sets in motion the chain of command tasked to take them out.

At the center is British Colonel Powell (Helen Mirren). She’s been tracking English citizen turned extremist Susan Danford and her Somali husband for six years with today proving her best chance at capture. Intelligence states they’ll meet with another wanted figure in this war and two new recruits—one an American boy. The objective’s to use a drone piloted by Steve Watts (Aaron Paul) and Carrie Gershon (Phoebe Fox) to identify them inside a suburban home wherein Kenyan troops will infiltrate and arrest them. It should be a rudimentary operation with Lt. General Benson (Alan Rickman) overseeing a room populated by UK Attorney General Matherson (Richard McCabe), Minister of State for Foreign and Commonwealth Affairs Woodale (Jeremy Northam) and Parliamentary Under Secretary of State Northam (Monica Dolan).

As if on cue the cell travels to a different house located within a militarized portion of the city that Kenyan forces cannot enter without sparking a bloodbath (Barkhad Abdi is sent undercover). Suddenly this capture becomes a kill order and no one’s willing to accidentally find him/herself in the crosshairs if something goes wrong in a legal or political sense. Public relations and propaganda must now be taken under consideration. Jurisdiction and hierarchy measured and approved. The nationalities of four countries are represented with military personnel clamoring for a go-ahead as elected officials peer deep into the recesses of their memories to discover whether they can refer up to a higher power for an official command. It’s military versus Parliament, terrorist versus innocent, and right versus wrong.

And in what I’d assumed was impossible, Hibbert and Hood mold these insanely tense circumstances with complete objectivity. It’s not spoiling anything to say the entire film revolves around this single target and the “should we or shouldn’t we” question about lethal force. Everyone dives into their rulebooks to find avenues with which to lessen the potential of civilian casualties while Powell incredulously begs for an okay because she knows she may never have another chance to remove such an important piece from the board. For her and Benson this isn’t even a question: you take the shot because you know first-hand what probably will happen if you don’t. Their consciences will be clear, but what of the others? Should they condone the action knowing what they know?

This knowledge comes in the form of a young girl (Aisha Takow) selling bread directly outside the window where two bomb vests lay. The film takes this information and puts it into the British system of command to see how it would play out in the real world. (I specify British because we and the film knows the American government would have taken the shot so soon that we’d be leaving the theater after thirty minutes.) How does little Alia Mo’Allim affect the mindset of Watts with finger on trigger? How’s she affect three mid-range officials with the authority to make a call despite knowing they can pass it off? How do you reconcile such a utilitarian decision with your First World sense of duty to mankind?

These are impossible questions because the answers are subjective. They hinge on the subjectivity of each nation’s protocol when it comes to means and ends. Even if Alia doesn’t die, you still have to take under consideration the effect any explosion has on the people caught in the crossfire. Who’s to say killing two suicide bombers and three leaders of a cell won’t spring up five more while promoting new leaders even more vile? This is the job we hand over to our elected officials. This is the job we would never want to have ourselves because there’s never victory in this scenario. It’s easy to vilify our politicians when we forget the sheer amount of pressure they are under weighing their citizen’s safety with that of the world.

Eye in the Sky provides an uncensored look at the chaos of modern warfare and the ramifications wrought from chairs thousands of miles away from the fight. It’s about impossible choices that are as right as they are wrong. And despite an amazing cast of celebrities and newcomers alike delivering nuanced, authentic performances, the filmmakers are the true stars for never taking the easy road of sentimentality or low road of agenda-pushing manipulation. Every answer is countered and none are presented as “better”. A decision is ultimately made that you can agree or disagree with in its aftermath: that’s your right as a free citizen of democracy. Never forget, however, that the decision isn’t made lightly. No matter the distance from the battlefield, war is forever cruelly grotesque.