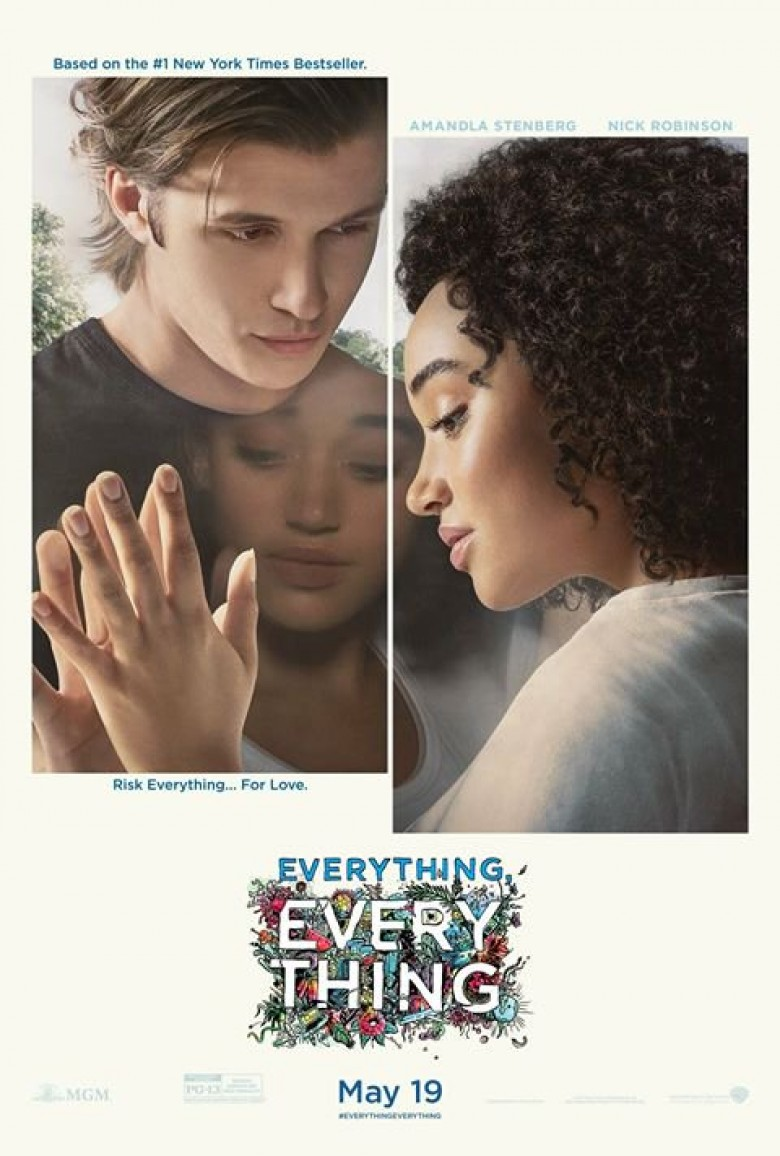 "When I talk to him it feels like I’m outside”

I was with Nicola Yoon‘s Everything, Everything for its first three-quarters. While it’s just as implausibly overwrought as The Space Between Us—another YA love story mired by a high-concept contrivance that literally places a character’s life in jeopardy so he/she may experience what living free and outdoors feels like—its smaller scale concept allows its romance to shine brighter than its premise’s consequences. The notion that Maddy Whittier (Amandla Stenberg) could die from her rare case of Severe Combined Immunodeficiency (SCID) looms because it drives her refusal to let it continue to dictate her life. There’s no race against time to save her or true subterfuge in escape (she’s eighteen and legally able to do what she wants). There’s simply the awe of experiencing everything she’s missed.

It’s manipulative, ham-fisted in its orchestration, and overtly melodramatic, but that’s par for the course with this genre. Its gimmick is drawn as a metaphor for how we’re all shy and awkward about real feelings, a tool inevitably proving as blatant as it is relatable. The star-crossed love at first sight between Maddy in her glass mansion and the troubled yet sensitive new boy-next-door Olly (Nick Robinson) is the stuff teens swoon about if they allow themselves the ability to look beyond its glorified puppy love suddenly being rendered as devotion. These are the things Yoon’s novel and subsequently Stella Meghie‘s film utilize to target its audience and exactly what that demographic buys their tickets to see. It might not be my cup of tea, but it’s effective.

Unfortunately, the author had other ideas beyond this goal. After treating us with enough respect to carry its shortcomings at face value by knowing full well what it is, the film drops a bombshell in an attempt to shock us into believing there was more to this tale than met the eye. Not only does it not earn the additional drama this reveal hopes to conjure, it renders the love story—the literal emotional backbone of the work—into afterthought. For over an hour we’re made to believe the disease is Yoon’s way to amplify the romance only to discover the opposite is true. It’s the romance that pushes for clarity about the disease, this love opening Maddy’s eyes to finally question everything she’s ever known.

This doesn’t make the story deeper or give greater meaning to the whirlwind romance. It just ensures that we recognize the flimsiness of the plot’s foundation. I questioned many things throughout, but the supposed reality that I was watching a cute bit of romantic escapism manufacturing a reality-based imprisoned princess saved by Prince Charming scenario told me to stop. I chastised myself for reading too far into something that didn’t ask me to dig only to see it pretend like it did without a shred of authenticity. The shift comes as a cheap trick, exposing cracks rather than filling them with context. What mother (Anika Noni Rose‘s Pauline) would keep her child locked away for eighteen years? What doctor wouldn’t introduce ways to integrate her with the world?

There’s an answer to these questions. They aren’t plot-holes and yet I wish they were because then I wouldn’t feel so cheated. The Space Between Us knew its idea of a boy born on Mars coming to Earth was cheesy science fiction and it put its cards on the table early for us to experience its lead character’s journey as one he needed to take for himself as much as those surrounding him. If Everything, Everything did the same my reaction would be completely different. It would succeed on those grounds if it remained about Maddy risking everything to feel the sun on her face, ocean waves on her skin, and kiss on her lips. She’d teach her mother (and us) that some things are worth dying for.

By changing the game its achievements are erased. It spends so long setting up an inspirational tale of courage and conviction only to push it aside for drama that’s much sadder and bleaker than anyone should prepare for since there’s no time to do its complexities justice once they arrive. I often thought how everything would be more worthwhile if Yoon had mined the psychological struggles SCID provides rather than merely painting it as the unfortunate circumstances birthing a cheerful artist with multiple talents. And if she went in that direction (it’s Yoon’s story I take umbrage with, not Meghie’s direction or J. Mills Goodloe‘s adaptation) the ending would fit. The familial drama in Olly’s family would feel like more than an excuse for him to leave too.

Instead its best moments conversely portray the two lovebirds’ unbridled joy. There’s a real connection between them that goes beneath the surface of lust and both Stenberg and Robinson do well playing teens with more to offer than their self-esteem allows them to believe. The scene where they meet in-person—his entrance into the airtight home being facilitated by Maddy’s nurse Carla (Ana de la Reguera), a character whose empathy fits this tone a lot better than Pauline’s suffocating worry—is memorably delightful with both having no clue what to do or say. A nice stylistic flourish subtitling their next encounter with the meaningful cadence/expression-laden subtext under their otherwise empty conversation earns its smile. We pull for their love even if it may end in her death.

But then comes the bombshell. The idea that what Olly and Maddy have can save them both disappears as the story pulls the rug on another type of love it had asked us to believe on faith. A synopsis of the book makes me believe Meghie and Goodloe rightfully changed things to render the ramifications of this turn as weighty as they must be (the book apparently doesn’t), but it’s still like we’ve stumbled into a completely different film. Pauline was the pawn, her authority a barrier to its central love. But now it’s Olly who’s revealed as the device, his inclusion serving as an excuse to pave Maddy’s way towards another truth. In the end nobody’s love feels real anymore and Stenberg’s endearingly likeable performance is wasted.

Advertise With Us
- Featured Event -
Sun May 3rd