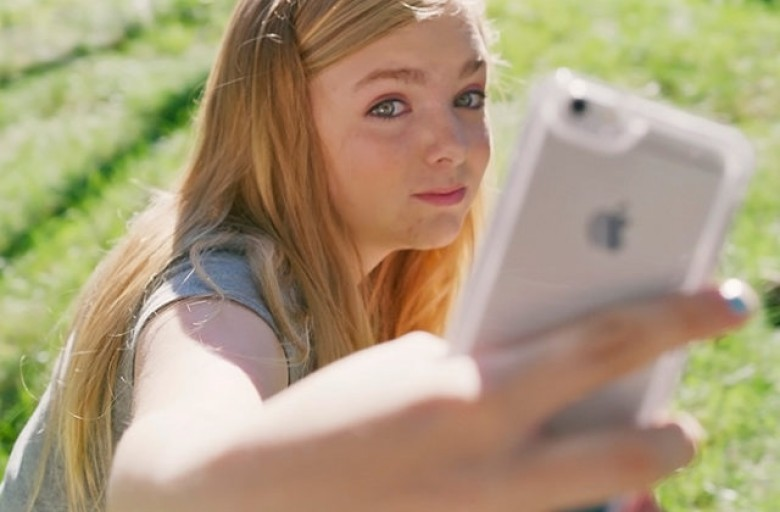 The transition between middle school and high school is weird and frightening for everyone—those who disagree are lying. It’s crazy how different those two worlds prove to be since elementary school and middle school are really quite similar. Some crave this shift, desperate for a new beginning. Others dread it because they know the pecking order restarts once multiple schools converge. But then there are also those like Kayla Day (Elsie Fisher) who don’t know what to expect because change is scary and the status quo insufferably depressing. So she decides to get a head start on her reinvention during the final week before summer. Well, it’s less a reinvention than introduction. A wallflower her entire adolescence, it’s time to be brave. Now’s the moment to stumble, fall, and get back up again.

First-time writer/director Bo Burnham has a handle on the awkwardness of this rite of passage as well as a finger on the pulse of what it means to grow-up in the digital age. This is what really sets Eighth Grade apart from other coming-of-age films these past few years. Rather than deal with a teenager burning through friends and acting out to his/her parents with college calling, Kayla’s tale feels rich and authentic because of her sense of isolation removed from any dreams of flying the coop—a state of being fostered by social media. This isn’t a girl with a few friends treated like pariahs ready to turn the tables. She’s a solitary introvert with crippling anxiety, and a split personality (online and “in real life”) that are gradually merging.

The division is night and day: a confident purveyor of life lessons she herself is putting into practice in an attempt to exit her shell, and a clumsily quiet nobody her classmates barely register as being in the room even when she speaks. After years of being nice to everyone in school only to be ignored (the one thing worse than being forgotten), Kayla fears that waiting until September will be too late. So when a chance invitation to the birthday party of Miss Popular (Catherine Oliviere‘s Kennedy) arrives courtesy of a mother (Missy Yager) hoping to see more of Mr. Day (Josh Hamilton), she forces herself to take it. The result is neither smooth nor successful. It moves from debilitating stress to embarrassed discomfort. But it’s a step forward nonetheless.

This is why Kayla's story resonates beyond gender. This is why a dude can do this young woman justice despite obvious skepticism. There are definitely moments unique to the female experience (handled with empathy, honesty, and unfortunate ubiquity), but in a broader sense, everything onscreen is universal. Whether it’s peer pressure and conformity working hard to cajole her into sacrificing her identity, or her inner voice rising to the surface when necessary as a mechanism for survival, we can understand her mix of trepidation, revulsion, and guilt. We relate to her angry outbursts with a dorky father, her yearning to be a “cool” kid even if it means hanging out with strangers, and the pain of utter disillusionment—especially when she feels like she’s letting herself down.

And it’s all presented as a slice of life vérité work in documentary style with visual cues augmented by a deafening synth score representing the adrenaline rush of energy whenever she sees cute Aiden (Luke Prael) or is about to do something the “her” of just last week would never, ever do. Burnham marks Kayla’s actions with her amateur self-help vlogs as chapter headings of sorts, each explaining the lesson we’re about to see in action, whether successful or not. All the “likes” and “uhs” are included, too, and yet none feel artificial. If we didn’t know better we’d believe this was Elsie Fisher’s story rather than Kayla Day’s because none of the dialogue screams line reading. We are right there watching life unfold around her.

The school’s faculty is rife with embarrassing try-hards, her dad is often clueless to her tempestuous attitude towards him, and Kayla is struggling to reconcile who she is, who she wants to be, and who she needs to be to exit this funk. It’s more difficult than you’d expect since there’s a false notion of inclusion through the internet. She doesn’t need friends to talk through tough subjects because YouTube has videos for that. She doesn’t need to hang with a handful of kids she knows when there are thousands just a “like” away via Instagram. And when she takes the plunge to engage in real conversation, calm detachment becomes insecurity and excitement. It’s train wreck upon train wreck until the right buzzword earns her devoted attention back.

We see a glimpse of what kids her age deal with in today’s world from middle schoolers discussing “dick pics” and domestic terrorism drills wherein a man with an automatic rifle walks the halls killing volunteer drama students. But there’s also the anxiety of making new friends, putting yourself out there, and deciphering the difference between lustful fantasies and warped sexual coercions. Even when the latter, though, Burnham merely presents what Kayla might do and the complexities surrounding what’s right, wrong, and easy. It’s not about earning a rousing cheer from the audience by having Kayla castrate the older lech shaming her into sex. It’s about the impossible place he puts her in, the compromises she’s forced to make to escape, and the devastation that hits hours later.

It’s about the duality of every single detail and how what we feel might not be what everyone else perceives. People have been talking about the heartbreaking scene between Fisher and Hamilton wherein he explains how much she means to him as a father and human being, but I’d argue it pales in comparison to a silent scene where he refuses to leave her side when she comes home distraught with grief. Him selflessly staying there despite her pushing him away and her eventual relief in knowing she can count on him to just comfort her without prying for details beyond “my daughter is hurting” proves so powerfully simple that we forget not every child is lucky enough to possess a parent capable of such compassion.

And that honesty comes down to Fisher’s performance. She’s so natural throughout whether the moment calls for awkwardness, confidence, self-deprecating humor, or abject terror. The brilliant sound design helps punctuate her spot-on comedic timing, but the drama is hers alone. Fisher imbues Kayla with a longing for more and an enthusiasm when the possibility presents itself. But she never loses that shy edge beneath. She never quite feels comfortable because none of us ever do. She avoids eye contact when being confrontational and speaks over those as nervous as she. It’s all so cutely precious and yet also profoundly potent at the same time. And her character’s life remains open-ended because Eighth Grade isn’t about cementing Kayla’s future. It’s about acknowledging how she’s just begun to write it.

Drama at Inish by Lennox Robinson