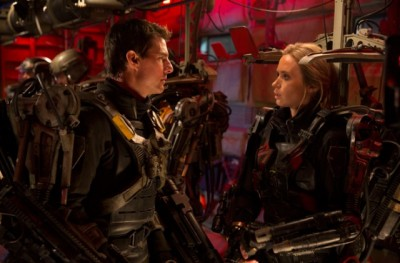 “The only thing missing is you”

When a script is placed on The Black List—an unauthorized survey of the “best” unproduced screenplays making the rounds—it’s generally a calling card for the writer. Many of these works come off to huge success and springboard the author to great heights in hopes more box office winners lay dormant inside his or her mind. With the highly entertaining Edge of Tomorrow, however, this isn’t quite the case. While based on a Japanese young adult novel by Hiroshi Sakurazaka entitled All You Need Is Kill, it wasDante Harper‘s adaptation that ultimately made the aforementioned list and earned the attention of prospective producers. He was the one tasked by 3 Arts Entertainment to bring this foreign tale to America and pique the interest of Hollywood’s largest studios yet he isn’t even credited on the final film.

Multiple ghostwriters are hired all the time because popular opinion states any film holding more than three credited scribes is an omen for disaster, but this one somehow survives intact. I haven’t read the original novel so I don’t know whether Harper’s or Jez and John-Henry Butterworth‘s (polished byChristopher McQuarrie) version was closer to Sakurazaka’s vision. All I know is that director Doug Liman supposedly scrapped two-thirds of the former’s work before hiring the latter duo to rewrite it from scratch in a way that the lawyers deemed Harper’s influence completely erased. Production became so crazy that Liman actually began without a satisfactorily finished final act. Despite the makings of big budget sci-fi failure, here I am an hour removed from the theater holding genuinely fond memories of an embattled time-traveling popcorn actioner against all odds.

That being said, the ending should have come five minutes sooner—much like its recent cousin Source Code. But if this mainstream concession is the only major issue present after the history Edge of Tomorrow endured, I think we can forgive it or at most walk out a little early. That’s how engrossingly fun the rest of it is at being a fresh, stylishly intelligent shell of the same old alien invasion trope we’ve seen countless times while also providing everything a summer blockbuster should. There’s star power with Tom Cruise, a badass heroine in Emily Blunt, authentic humor courtesy of the plot’s repetitious construction, and impressive battle scenes pitting meched-out human soldiers against their faster, adaptive foes coined “Mimics”. And its cribbing of Groundhog Day‘s conceit proves a perfect vehicle to explain its concept of time travel.

As we enter in-progress war it’s neither a nameless grunt on the ground nor Sergeant Rita Vrataski’s (Blunt) valiant warrior angel emblazoned on buses and billboards that introduces us to the carnage of near annihilation. No, it’s the media spinning Major William Cage (Cruise), a man who recently leveraged an uneventful ROTC membership and the advertising expertise his failed firm no longer needed into securing glorified officer status as a public relations guru for the American front. He’s all smiles and positive spin, gracing television screens as a calming voice to counter the invading extraterrestrial force rapidly sieging Europe that’s now at England’s door. He’s never used the army-issue mechanical suits he’s declared warrant “little training” to operate, yet he unwillingly finds himself readying for frontline action thanks to Brit General Brigham’s (Brendan Gleeson) strong sense of self-preservation.

Meant as a plant to sell the world on their counterattack from a shore expected to contain minimal enemy pushback, Cage is ordered to suit up. Understandably resistant while threatening blackmail, Brigham is forced to arrest him, tase him unconscious, and label him a deserting Private. Abruptly woken in the midst of deployment preparations, Cage must nervously obey Master Sergeant Farrell (Bill Paxton) by joining J-Squad, mounting a plane, and landing on a beach swarming with Mimics. Dead in minutes, mortality somehow resets, jolting him awake with déjà vu post-Brigham betrayal and pre-Farrell barking. Utterly confused, his first instinct is to save those he’s helpless to watch die again and again until Vrataski—in awe of his uncanny knack for knowing where incoming Mimics will be—looks him in the eye and says, “Find me when you wake up”.

From here comes the rinse and repeat plotting of Cage seeking Vrataski over and over within the same perpetually looped day until her training readies him to help win the war. To say more than acknowledging the fact she believes his Groundhog Day affliction would ruin the story’s effective twists and turns courtesy of an enemy seemingly always five steps ahead. Constantly awakening at Farrell’s feet a stranger, he learns to memorize dialogue and movements to circumvent any unnecessary superfluity these introductory conversations contain. His smug delivery as a man impatiently pushing interactions to exactly where he needs them is perfectly timed to earn genuine laughs while also efficiently propelling the story forward. Cage may forever be submitted to the troops as a deserting newbie, but he eventually shows he’s the most veteran soldier they have.

To reach that point he must embrace his unique situation. So we watch him die in the training room while strapped to an 85-pound hydraulic suit only as strong as its operator. We watch him die on the beach to steadily map a path through the stunning D-Day-like chaos soaked in PG-13 violence via aliens with eye-catching visual appeal. We understand the stakes, know this repeating battle is humanity’s last stand, and accept Cruise’s ever-evolving coward turned champion as a beacon of hope. He and his comrades may possess a healthy dose of sarcasm and humorous bite, but they’re also emboldened by the self-sacrificing attitude necessary for victory. While Edge of Tomorrow is great as a result, it would have been truly special if the filmmakers didn’t end it with an inexplicably convenient epilogue subverting that pure heroism.