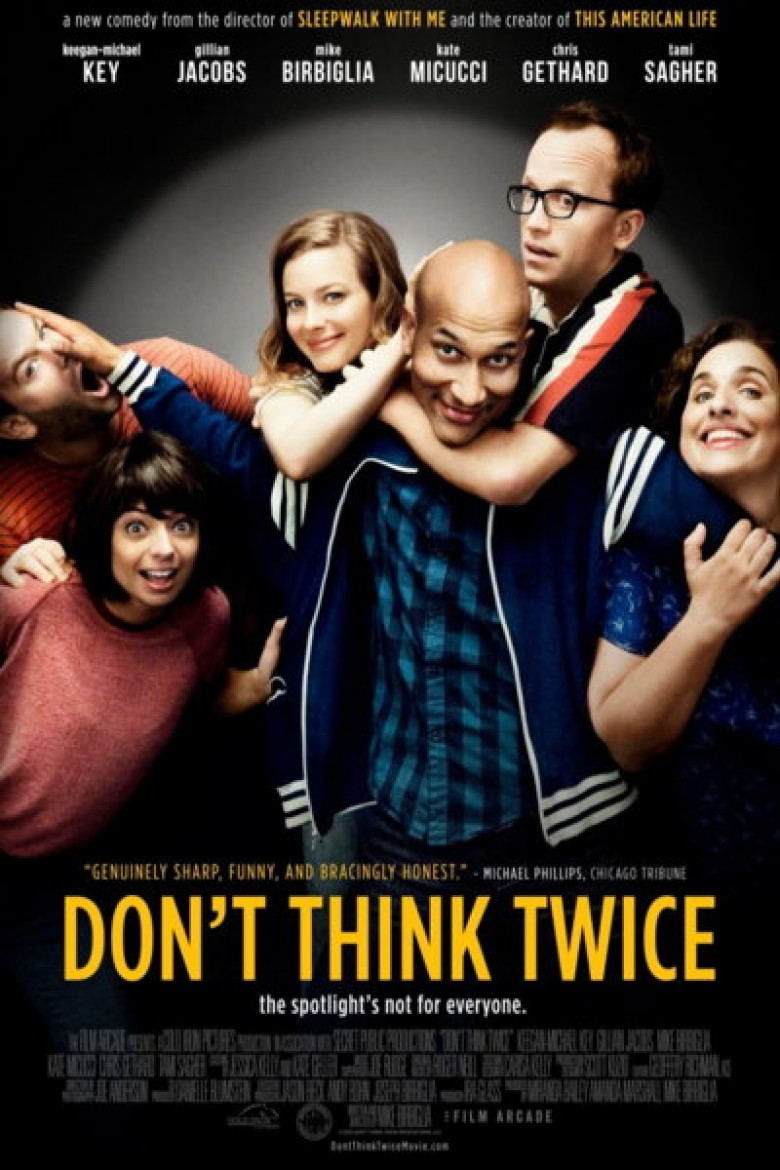 “Your favorite bunch of weirdoes”

The type of films that sting the most are the ones that are universal in emotion despite being niche in subject. So what if this tight-knit group of contemporaries championing each other’s work as they strive to improve their own are improv comedians selling out a fifty-seat theater in New York City and you’re a mechanic or barista or garbage collector or Fortune 500 CEO. It doesn’t matter what they or you do as long as we’re all human: fallible, petty, vulnerable, delusional, and somehow still loving and compassionate when the pain of rejection and betrayal is no longer fresh. We see ourselves in their group because we understand their plight. Everyone hits that crossroads between hope and acceptance, some evolve and others stubbornly fall again and again.

Mike Birbiglia‘s Don’t Think Twice is above all else a depiction of truth, a look at the harsh reality of the masses who never achieve their dream job or happily ever after. It’s about growing up and discovering there’s more to be had in life than youthful desires a lengthy period mired by setbacks and blockades pretty much cements as impossible. That’s not to say it won’t work for some—often those who might not even want it as much as you—but exceptions prove the rule, they don’t adhere to it. Sometimes it’s simply not meant to be and the hardest thing to admit is how leaving everything behind may be best. Only then can you open that other door you were too afraid to pursue.

We delude ourselves into thinking we’re close. Another year, another decade—as Miles (Birbiglia) says, “I was inches away.” But those inches in his mind are merely an excuse to keep trying. And he should because he loves what he does. He formed The Commune and has already seen one former student of his go onto the big time with “Saturday Night Live” parody “Weekend Live”, the same show Miles has never been asked to join. That brush with fame in knowing the tools he helped his pupil learn were the correct ones to get the job has kept the fire burning. At a certain point, however, teaching (and sleeping with) twenty year olds who prove younger than his ever-increasing age each year only takes him so far.

The same goes with Jack’s (Keegan-Michael Key) talented yet over-zealous voice-man possessing the tools to succeed and the ego to push aside friendships to do so. His girlfriend Samantha (Gillian Jacobs) never even performed before befriending these guys and joining the troupe, their welcoming arms and sense of humor opening up a new world her introverted self couldn’t dream possible. Allison (Kate Micucci) still yearns to be a comic book artist, Bill (Chris Gethard) struggles to reconcile his wants in life with those of his father, and Lindsay (Tami Sagher) is a trust-fund baby living at home whose anxieties refuse to let her spread wings. They’re all kind of train wrecks on their own (don’t lie and say you aren’t). But onstage together they’re absolutely magical.

This is where we meet them: backstage readying for an evening’s performance. They have inside jokes, clairvoyant timing, and the audience eating out of their hands. Nothing could break them apart; their synergy too good to ever fracture no matter what pressure comes their way. Not even the news that their usual theater is closing can do it. That’s just one more obstacle to overcome because improv is a part of their soul. Without it they’re waitresses, grocery store samplers, and bike messengers. With it they’re one pair of eyes away from stardom, something one of them is about to discover in the form of a “Weekend Live” position. In theory one member’s fame should be the groups’ success. Reality contrastingly brings jealousy, vanity, and insecurity.

Suddenly this effervescent hangout comedy of likeable characters turns into a serious existential crisis. It tackles celebrity from the angle of haves and have-nots, the strain of relationships built on assumptions that may not be shared, and the truth of mankind’s ugliness hiding beneath visibly genial façades. It satirizes the eccentric tastemakers wielding unchecked power and the go-getters willing to do whatever it takes to get ahead no matter those they trample along the way. Fear and despair settle in with a crippling sense of debilitation, the flood of emotions opening eyes to true desires beyond paths that may have been chosen via peer pressure rather than joy. Things get real fast and it’s hard to tell if we’ll ever see that fun-loving group from the beginning again.

Birbiglia gets a side of his cast that we don’t generally see and it’s an amazing find. Key has always shown he has the chops to be more than supporting comic relief, his roller coaster of emotions here cementing it as fact. Jacobs is most known for being the buzzkill on “Community” with a wealth of self-doubt that conjures faux confidence to combat it. As Samantha she instead buckles under that pressure, retreating within herself until a light bulb clicks to allow her to follow a path she never would have seen without these friends. Micucci, Gethard, and Sagher each show a brilliant sense of empathy and abrasion, kind and helpful when it suits them before becoming vindictive and mean when not. It’s hard to compete against those you love. Pain is unavoidable.

As for Birbiglia himself, his Miles is an intriguing figure at once confidently self-deprecating and completely lost without direction. He’s tried the hardest for the longest and yet is still stuck in a routine that’s sadder each passing year. He wants to support those he inspires, but doing so is impossible when he can no longer inspire himself. Credit Birbiglia for going to these dark places of our psychology rather than sticking with the stereotypical success story and inauthentic back-patters devoid of resentment. Everyone’s life is a volatile journey with many more lows than highs, but an artist’s life is that times one thousand. Because it’s so prevalent these characters are primed to lay everything bare. Only upon relating to it as an outsider can we begin repairing our own damage wrought.