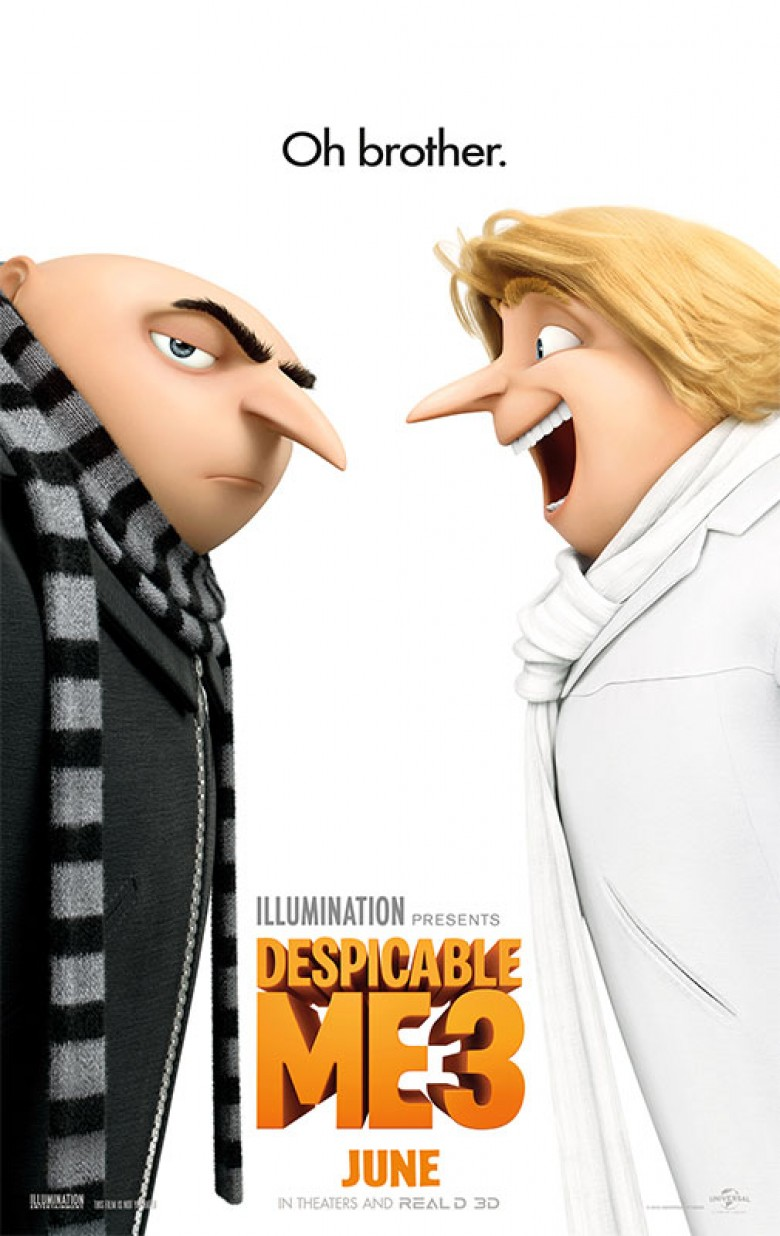 “I love the combination of Gummy Bears and meat”

You have to give Illumination credit because they chose to cultivate an animated niche able to set them apart from Pixar rather than simply seek to copy their blueprint. Their path brings them closer to Dreamworks and yet we can still pick out the difference because Christopher Meledandri‘s style strips things even further down to a level of pure entertainment. So it’s no coincidence that his flagship property Despicable Me has now spawned two sequels to go along with a spinoff, it’s manic energy countered by an over-abundance of heart providing families the ability to laugh without a crippling sense of pathos constructing a form of complexity that isn’t necessary for its earned success. Kids and adults alike find joy together in the physical comedy of absurd fantasy.

It’s a series of surfaces—something that would declare a Pixar work inferior and yet earns an Illumination film rapturous applause. Is that fair? Probably not. But it’s the reality of their respective legacies and one that allows them to coexist without really stepping on each other’s toes. We come to watch villain turned hero Gru (Steve Carell) fail to hilarious effect with a broken accent, quick temper in the professional sphere, and surprising warmth at home alongside his adopted girls (Miranda Cosgrove‘s Margo, Dana Gaier‘s Edith, and Nev Scharrel‘s Agnes). Maybe he’ll learn a lesson. Maybe he’ll fill another piece of his soul with the love that his mother (Julie Andrews) never shared. Or maybe he’ll just get himself into a crazy situation for us to enjoy.

Screenwriters Cinco Paul and Ken Daurio return to deliver this latest chapter, Despicable Me 3. They built these characters from the beginning, setting their damaged lives onto a course towards redemption and fulfillment. We meet them again after their complete rebirths. Gru the villain has not only embraced his role as father, but also as husband (to Kristen Wiig‘s Lucy) and Anti-Villain League super-spy on the side of justice. The girls have adjusted to a stable existence with love and respect, their comfort level actually affording them room to rebel a bit against the idyllic (by comparison) utopia enveloping them. And Lucy has stepped up to the plate as mother, her ever-awkward demeanor a perfect foil to maturely beyond-their-years children desperate for authenticity rather than cliché.

It’s this notion of comfort and perhaps complacency that allows the franchise to revert back to a similar structure as the original film. Part 2 lost some fun in its high-concept, single-locale adventure that reined in Gru’s individuality so the moving parts surrounding him could embrace their own eccentricity. It still worked because the undercover scenario provided room to do exactly that. We saw Gru’s morality shift just as we experienced the growth of the girls and the affable if over-zealous Lucy finding their places beside him. This means that Part 3 would inevitable have even more to juggle with fully formed characters each desiring a means to progress forward. And the way to do so effectively is scaling down the plot so they can shine above it.

So we’re back to simple good versus evil. Gru more or less fought himself in the second film so it’s nice to have an over-the-top adversary in Balthazar Bratt (Trey Parker) to externalize actions like the first installment did with nemesis Vector. Bratt’s a former child-TV star whose celebrity waned during puberty. In order to combat that sudden loss of appeal—despite retaining the massive ego it built—he becomes the character he played. A diabolical criminal with expanding bubble gum weaponry and sick 80s dance moves, he seeks to reclaim notoriety through infamy by stealing the world’s largest diamond. Stopping him ultimately falls to Gru and Lucy before an unfortunate misstep coupled by a new tyrannical boss (Jenny Slate‘s Valerie Da Vinci) leads them to get fired.

The result’s a similar identity crisis to Part 1 mirrored from bad guy potentially turning good to good guy turning bad. It’s a secret twin brother named Dru (also Carell)—who was raised by their famous villain father—that tempts Gru back to the dark side. Dru hopes to honor Dad’s memory by becoming the evil genius he never could and looks towards long-lost bro Gru to show him the ropes. Will the reformed baddie slip back into old habits, stop himself short due to Lucy, or find a way to turn his propensity for theatrical chaos into a force for good? His competitive spirit means Bratt will remain in his crosshairs either way, the desire to beat him proving the strongest motivating factor for his every decision.

But that’s just one plot thread. The others have also earned our interest enough to cut to the burgeoning relationship between Lucy and the girls, Agnes’ unicorn hunt, and the minions finally striking at work to have their voices heard. The latter are given much less screen time compared to the past and it’s a godsend. These yellow goobers might be cute, but they’ve worn out their welcome a bit after being rewarded with their own spinoff. Their plotline could be excised here without losing coherency, but their antics as convicts prove funny enough to warrant the brief interludes they receive. Directors Pierre Coffin and Kyle Balda (replacing Chris Renaud) expertly jump from character to character so each can excel as individuals and parts of the climactic whole.

Don’t expect much in the way of exposition, however. The notion of family with Gru and Dru is glossed over, the discovery merely a device to whet the former’s appetite for destruction. The Anti-Villain League is background dressing too, its early removal meaning one less thing to worry about. Even the little history of Dru’s hometown Freedonia arrives in service of Agnes’ unicorn search, itself the vehicle to a central message of finding what we need rather than want. In the end that’s what we’ve learned in all three movies—a simple yet potent theme to give meaning where outrageous shenanigans generally rule the day. It complements that absurdity (Parker’s Bratt might be the best villain yet) perfectly within this consistently charming, welcomingly spare, and infectiously funny franchise.