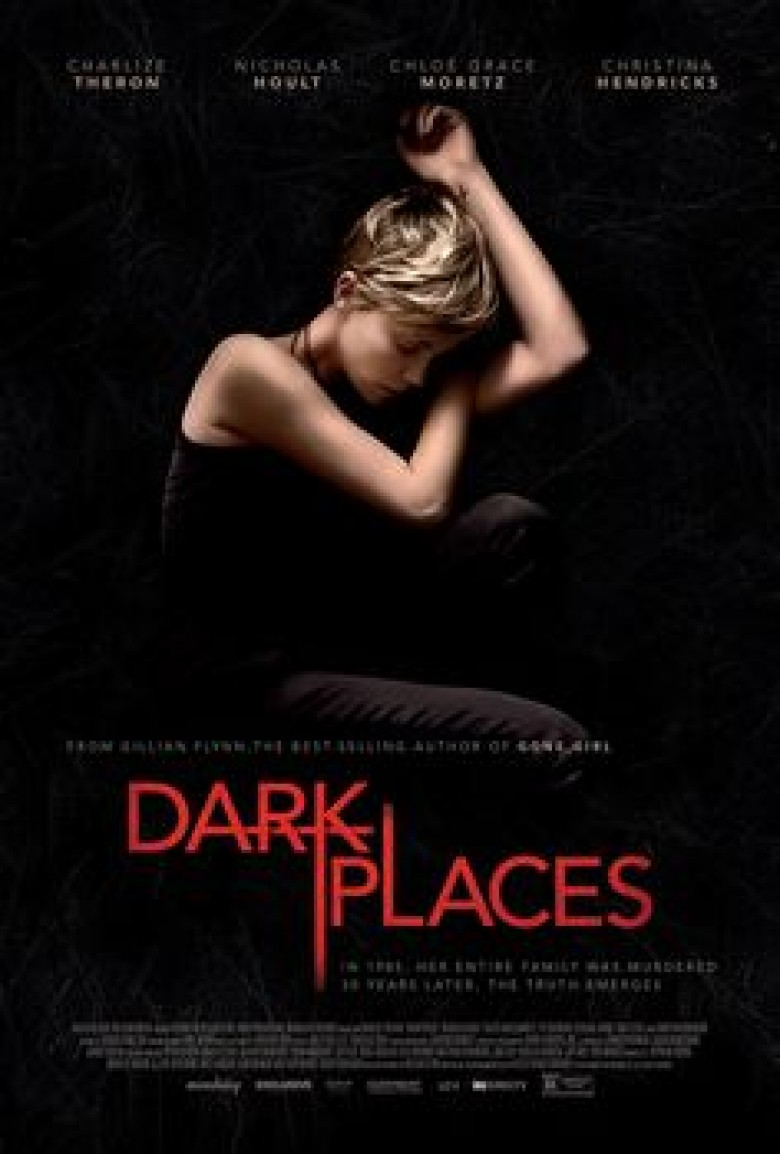 If Gillian Flynn wasn’t the “It” author after the phenomenon that was Gone Girl the book, she surely was once David Fincher adapted it into a huge moneymaking win. What’s interesting, though, is that Gone Girl wasn’t the first of her novels to head into production cinematically. That honor goes to her sophomore effort Dark Places, which began shooting one month sooner in August 2013. Scripted and directed by Frenchman Gilles Paquet-Brenner, who last helmed the critically acclaimed Sarah’s Key, this film probably owes a debt to Fincher, et al for paving the way towards it finally arriving stateside a full year later via A24. With a sprawling cast of recognizable faces alongside Flynn’s name, you’d think there’d be more fanfare accompanying it. While not quite as polished as its blockbuster sibling, its thrills are still effectively drawn.

I’d go as far as saying Paquet-Brenner directs the heck out of the material considering it’s composed of flashbacks from multiple perspectives outside protagonist Libby Day (Charlize Theron). With the murder of her mother (Christina Hendricks‘ Patty) and two sisters being the central mystery to decipher beyond the presumed guilt of brother Ben (Corey Stoll), we must continuously go back as new details emerge some twenty-eight years later. Whether it be a new memory of Libby’s that may not mesh with the story she told on the stand fingering her brother as the culprit or a look behind the curtain of Kansas City farmland squalor and the futile attempts of a single mother doing whatever it took to protect her kids, we soon learn nothing is quite as it seems. And this surprises no one more than Libby.

Such a plot construction obviously shares similarities to Flynn’s third book Gone Girl, but the catalyst for its sudden desire to seek answers is hardly as conventional as a media outcry looking to lynch a potentially volatile husband. The reason Libby begrudgingly accepts the task of researching a past she’s never completely escaped—purposefully, I might add, thanks to countless donations from strangers wanting to help the “poor orphan girl” over the years making it so she’s never held a job in her life—comes courtesy of an unsolicited letter from self-proclaimed entrepreneur and “The Kill Club” treasurer, Lyle Wirth (Nicholas Hoult). While creepy by default, he’s accurate in stating the group isn’t as creepy as one initially assumes. Besides a few cos-players dragging tragedy to new lows, some members are merely concerned citizens after the truth.

Lyle and his friends believe Ben’s innocent while Libby holds strong to the belief no one else could have murdered her family but this Satan-worshipping loner. Being that she’s well into her thirties now and depleted of her pity fund, however, she’s left with no choice but to comply in return for a stipend. They’ve three weeks to exonerate Ben before his file is destroyed to make room for new ones and his chance at freedom extinguished. Why he’s suddenly vocal about his innocence despite never filing an appeal is one of many strange revelations shedding light on fresh players Libby’s never heard about. Suddenly her absentee father (Sean Bridgers‘ Runner), Ben’s secret girlfriend (Cholë Grace Moretz‘s Diondra), and a group of girls who accused Ben of molesting them rise to the surface with very little digging.

This is the first issue Dark Places is unfortunately hampered by—a conveniently steady stream of new material no one thought to find two-plus decades ago when it mattered most. It makes sense considering Ben (played as a teen by Tye Sheridan) never took his trial seriously and helped it seem an open and shut case, but the ease of Libby’s discoveries still ring false. The second misstep is blatant foreshadowing on behalf of the hopefully innocuous sounding announcement of another case that instantly fits as a possible twist. There’s obviously more to the truth than a simple hypothesis so early on can predict, but its sloppy introduction is disheartening at best. I blame Paquet-Brenner the writer for this. I haven’t read the book, but much of what’s wrong with the film appears to stem from insufficient condensing.

A quick skimming of the novel’s synopsis reveals many details of Libby and her family that a two-hour movie can only hope to touch upon. There’s a moment where the camera so adamantly forces us to watch Theron’s Libby steal Hoult’s Lyle’s pen that I waited for its never-arriving payoff. Supposedly her character is a kleptomaniac and this proclivity actually assists in discovering answers to the murder on the page, but here it’s merely an Easter egg for those who read the source material. If my research is to be believed, Libby’s “a-ha” moment of truth in a person of interest’s bathroom plays out differently than how Flynn original wrote it. What’s most interesting is that I think the film handles it better—but that could just be my not having experienced the breadth of her grifting.

Had this been closer to Gone Girl‘s two-and-a-half hour runtime, some flaws could have been corrected. Extra time to feel the Day family’s 80s-era dire straits and understand Kansas’ Satanic-affinity more deeply would have brought things into focus beyond trickery. I’m not saying Paquet-Brenner tricks us, just that he’s cinematically handcuffed to remove exposition by compressing Libby and Lyle’s hard work into dumb luck. It’s too bad because Theron’s Libby is a welcomingly complex character with layers beneath her lazy moocher façade and both Sheridan and Stoll bring an equal level of intrigue to their starkly contrasted Bens with decades of evolution between them. Dark Places is a slow burn mystery that lives or dies by its carefully paced revelations. Paquet-Brenner tried his best, but I felt most everything was fed to me rather than left for discovery.