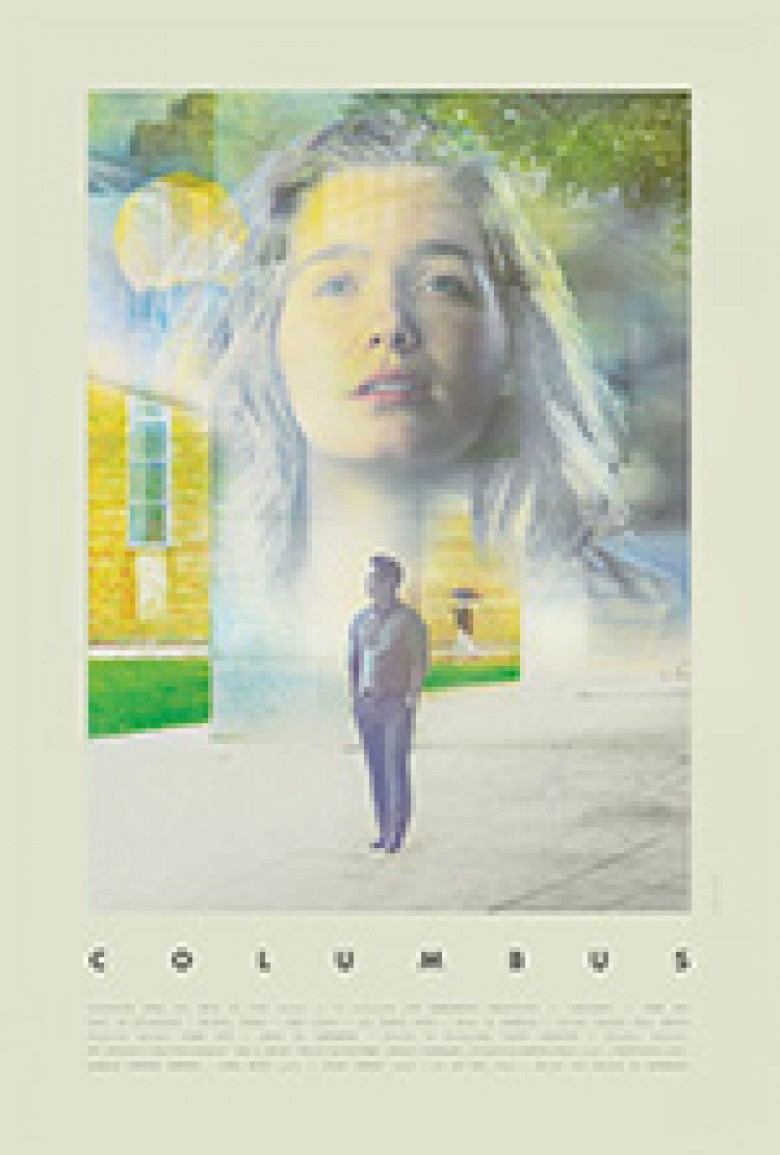 “You grow up around something and it feels like nothing”

I’m not sure there’s a better art form than architecture to make first-time writer/director Kogonada really feel at home behind the camera. The man who made his name with video “supercuts” showing aesthetic through-lines of auteurs like Terrence Malick, Wes Anderson, Stanley Kubrick, and Yasujirô Ozu has ostensibly made a feature length movie with the structures of Columbus, Indiana serving as his subject. He focuses on the straight lines prevalent throughout the city, each composition meticulously blocked for a captivatingly static environment for which his characters can exist—and sometimes move—within. The title is not therefore just a metaphor for discovery, but a signifier of the film’s true subject. I didn’t even know there was another Columbus besides the one in Ohio, and yet here’s a love letter to its beauty.

It’s difficult not to find yourself mesmerized by the locale. Kogonada and cinematographer Elisha Christian shoot it as though it’s a giant Frank Lloyd Wright ediface: allergic to curves. And just as the building that librarian/architecture nerd Casey (Haley Lu Richardson) studies is off-center but balanced, so too are their cinematic compositions. They take us from a hallway in perfectly measured perspective with a vanishing point dead center, to an open-air cement enclosure shifted to the right so we see the inside edge of the left side’s giant columns. The former puts its actor at the center coming closer while the latter sees its actor in the foreground at left. Both are expertly placed for visual impact: one keeps our gaze all-encompassing, while the other leads us into the frame.

I won’t lie and say this level of calculation isn’t distracting, though. I often wished actors would move and force the camera to follow. It seems very advertisement-like in this respect, each frame carefully built for visual impact before robotically transitioning to another. But I wonder how much my knowing who Kogonada was beforehand affected me. Was I projecting the precisely edited videos from his past onto this present script about commencement (beginnings and endings simultaneously)? Was I looking for the craft instead of letting it envelope me? Or is it truly so overt? This is merely an observation—I enjoyed the film, regardless. And if nothing else, his use of sterile mise en scène allows the heavy emotions shouldered by his actors to be more pronounced.

Just as these austerely rigid settings and emotionally ravaged characters create a contrasting visual juxtaposition, their dynamic also brings to mind art’s ability to make us feel. This idea that art in any form can move you is something that’s brought up in the film as an idea you must embrace to accept the power of its practice. Maybe these environments are nothing more than engaging crops of glass, wood, and stone. Or maybe they’re carefully configured frames of beauty meant to calm you with their serenity or subdue you with their scale. It really is in the eye of the beholder and the specific moment you find yourself gazing upon it. Casey’s love of architecture stems from desperation. Jin’s (John Cho) appreciation has only just begun.

They meet by chance. She’s picking up her mother from an overnight shift cleaning the local hospital just as he enters, an out-of-towner visiting his ailing father. That father is an architecture expert in town for a lecture Casey was to attend. She’s trying to get a full-time job at the library to help her single mother who currently works two jobs to stay afloat, and to keep busy—architecture is merely a hobby. Jin translates books from English to Korean, the two cultures that very much a part of him, even as he hopes the former erases the latter. His Korean heritage dictates how he should act around a comatose family member, and yet said family member never much cared about it either. What then should he do?

Casey and Jin are very much opposites yet they are both stuck in a similar, purgatorial wasteland. So enraptured in “raising” her mother (Michelle Forbes)—for lack of a better term—Casey has put her life on hold despite her interests, opening doors she never thought possible. Jin’s so intent on keeping a grudge intact with a father who he believes kept one back that he can barely bring himself to visit the hospital, despite having virtually nothing else to do. If the man were to die, Jin could just send the body to Korea and be done with it. But while his father remains alive he must put on a show, stay by his side in Seoul, and wait. Jin will have to pause his life, despite never having the favor returned. He’ll become Casey.

It’s therefore unsurprising that he tries to talk her into leaving. He sees himself in her and knows that the freedom away from home to become her own woman is the correct move. The difference is that he wanted to go at her age. He sought to flee his father while she can’t help thinking that she’s abandoning her mother. The two become role models for each other in this way. Despite a bit of romantic flirting (age disparity be damned), this relationship truly is platonic. They both seek to inspire the other to do what they believe is best in this specific moment. It’s time for Casey to spread her wings just as it’s time for Jin to bury his grudge and not live to regret letting his father die alone.

Kogonada’s script isn’t blunt in this message, though. Just as his environments are shot in static silence which speaks volumes, his characters’ dialogue proves to be about much more than the words themselves. The entire film seems like it takes place in just a few days, and yet these two strangers learn to understand the other like they may never have understood anyone in their lives before. It all stems from listening. For example: Jin hates architecture—he’s “indifferent” to it. Of course he is. It was his father’s field and he surely tried to drive it home into his son. But when Casey talks about it, he starts to comprehend its impact beyond “my father says.” Listening to her passion stirs passion in him for art, life, and love.

These two characters are complex people trapped between heart and mind, much like the leads from John Carney‘s Once. Kogonada draws his film like an “X” with Casey and Jin crossing paths and ending up on a trajectory towards where the other came from. Both Cho and Richardson are unforgettable, with an easy chemistry that starts out as stilted, guarded awkwardness before quickly thawing to reveal warmth only an empathetic stranger could provide. They’re tired of being surrounded by the same people; tired of feeling in a rut of their own choosing because change is just too hard. She fears her freedom comes at the cost of selflessness. He fears being selfless—as strength, not weakness—will cost his freedom. What they discover is how one doesn’t replace the other.

Advertise With Us
- Featured Event -
Sat May 2nd

Once Upon a Flatline - Debut Show