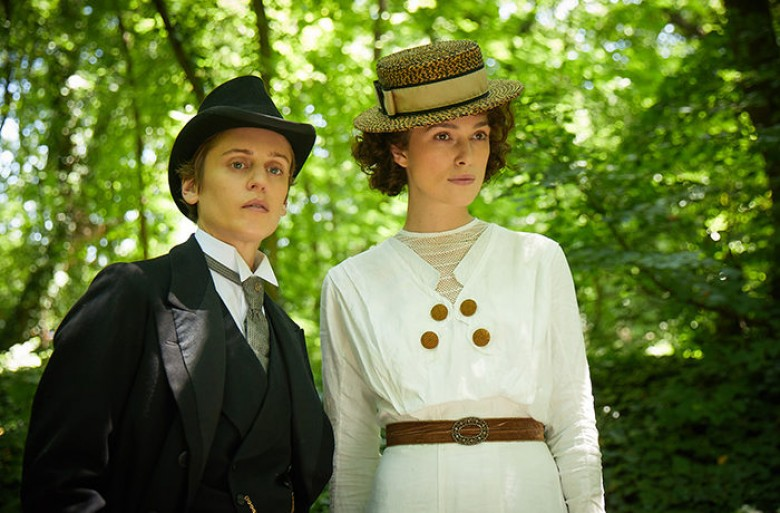 Denise Gough stars as Missy and Keira Knightley as Colette in COLETTE, a Bleecker Street release.
- Share this page -

What Wash Westmoreland (who co-wrote with his late husband Richard Glatzerand Rebecca Lenkiewicz) has done with Colette is craft an origin story for the famous, Nobel Prize-nominated French novelist Sidonie-Gabrielle Colette. It begins in Saint-Sauveur-en-Puisaye with her as the teenage daughter of poor country folk unable to pay a dowry to the successful Parisian entrepreneur who fancied her, Henry Gauthier-Villars (known by his more concise nom-de-plume, Willy). Colette soon moves to Paris with her new husband—who gave up his inheritance to follow love—and eventually becomes one of his many ghostwriters with the sensational (semi-autobiographical) hit Claudine à l’école. From there arrive additional books, a few affairs, sexual fluidity, and the eventual long-overdue desire for credit as an artist escaping the shadow of her “headmaster.”

Spanning almost two decades, the film travels through the years as though it’s providing a Cliff’s Notes of pertinent check stops along the way. This is both to its favor as the shifts are swift with context clues to gloss over big moments that are unnecessary to watch play out (the wedding for instance) and its detriment as we begin to feel its length. There’s a staccato rhythm to the whole that prevents us from ever truly getting to know who Colette (Keira Knightley) and Willy (Dominic West) are besides embattled lovers growing shrewder with fluctuating amounts of affection, respect, and honesty. In order to find a way to ensure everything important to this segment of her life is included, Westmoreland and company ultimately render the plot hollow.

Whenever a conflict arises, we watch as it is solved. Sometimes this proves a matter of asking forgiveness or implicitly granting it. Sometimes a deal is struck that we can assume was kept for the duration of time passed (marked by each chapter’s date and location) before unraveling into a brand new point of friction to subsequently be extinguished. The film therefore finds itself on a merry-go-round with each episode following an identical outline augmented by increasing stakes and a more robust understanding of the world in which they live via age. We witness an evolution as the Colette who often accepts empty (if sincere) promises from Willy at the beginning inevitably discovers how much power she holds within their business relationship as well as their romantic one.

That growth is the driving force of the piece. Everything around her stays the same whether it be Willy’s cowardice in telling the truth despite Colette already having proven she was okay with an open marriage as long as he didn’t lie or the pretentious pomp and circumstance of an urban aristocracy with heads not quite far enough up their behinds to dismiss the Claudine novels but just far enough to decry her “fictitious” scandals when their real-life counterparts are exposed. Rather than hide, however, Colette embraces the anger. She awakens within herself a bi-sexual creature unwilling to compromise her love, happiness, or identity. We watch as she takes control of her life with the confidence and talent necessary to steer her future without needing anyone else’s approval.

It becomes an empowering saga of self-reflection and agency at the turn of the nineteenth century with LGBTQ themes and a transgender man (Denise Gough‘s Missy) who’s able to live “out” because of wealth and title. To really sell this message, however, means glossing over Colette’s own problematic moments such as the affair she began with her sixteen-year old stepson (from her second of three marriages). Interestingly enough, it’s this exact sense of hypocrisy that makes the film as entertaining and complex as it is beneath the gorgeous production design and superb acting (Knightley and West are perfectly cast). I guess it’s better for Colette to call Willy out on his then someone else to call her out on her own, though. The latter would muddy the point.

We’re supposed to put ourselves in her corner, rallying around her wit, intelligence, and courage. We’re supposed to see her as the feminist icon she is regardless of later transgressions because she was a young girl who came from nothing that became something through hard work, talent, and her gender despite the odds being so thoroughly stacked against her. Westmoreland takes pains to guarantee this is what happens and the film has a lot going for it as a result. It’s just a shame that so much of it revolves around repetition in the Willys’ lives. To think about all Colette did after this period in her life is to wonder why they didn’t expand the scope a bit to make the film a birth to death biography.

That’s how it would have earned its two-hour runtime because focusing on the less than two decades with Willy does not. This part of her life could have alone, though, if the filmmakers weren’t so intent on keeping him so prominent throughout. We catch glimpses of her relationship with Louisianan Georgie Raoul-Duval (Eleanor Tomlinson), but only as they pertain to Colette’s marriage rather than her feelings outside it. The same can be said about Missy—his involvement purely to show how Willy could turn scandal into money. With so much time spent on Willy’s position to control her, love her, and usher her into a world with which she could excel, we lose the opportunity to delve deeper into her sexuality as more than a propulsive plot device.

In the end Colette becomes an effective appetizer for audiences interested in researching who this woman was removed from Willy’s domineering desires. It introduces us to their swinging Parisian lifestyle with an eye towards infusing a pansexual aesthetic you wouldn’t necessarily assume could be so out in the open during the early 1900s considering how much backlash this lifestyle still receives today. And it succeeds on these marks to tell a captivating if dry story about a figure who deserves our attention—especially now. Thankfully Knightley and West are so good that we find ourselves enjoying their characterizations enough to forgive the shortcomings of the rather superficial progressions they follow. We learn what Colette’s sexuality does to her marriage, but not enough about what it does to her.