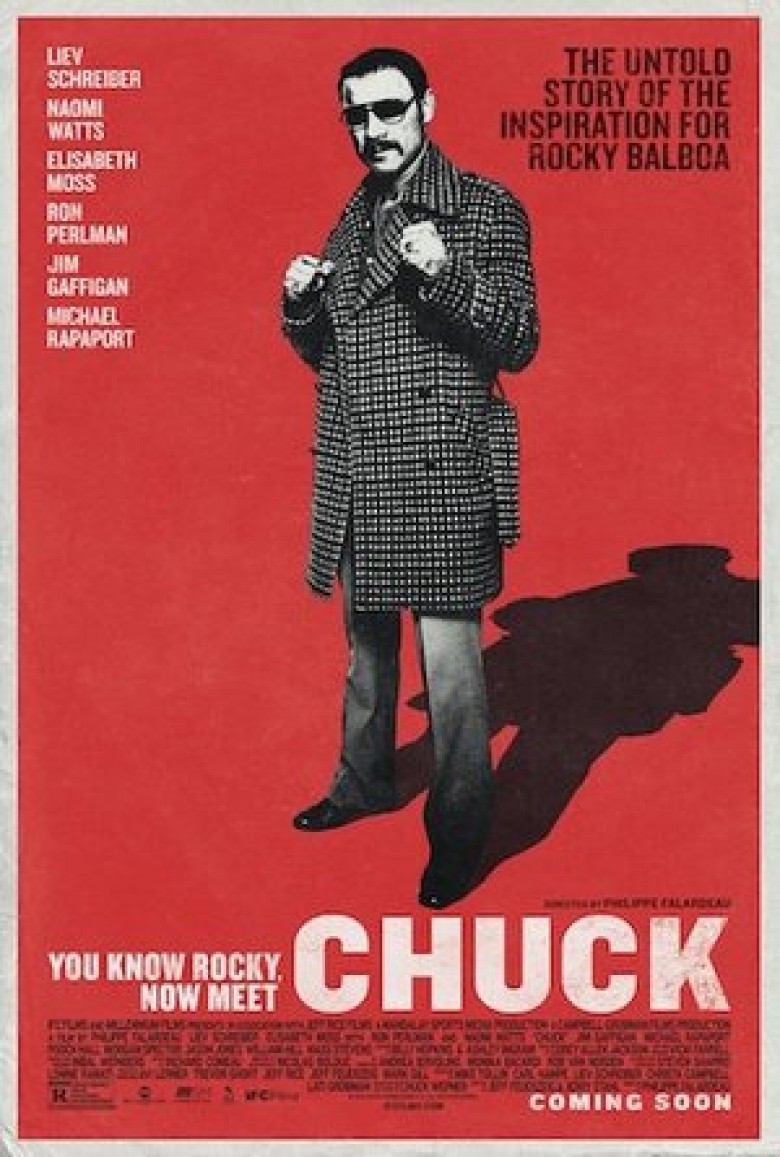 “That guy could take a punch”

Who is Chuck Wepner? It’s a legitimate question. I didn’t know—not that I’ve ever followed pugilism in my life. So when his story received the cinematic treatment from director Philippe Falardeau with the title The Bleeder, I honestly assumed fiction. Here comes another boxing movie about what’s assumedly a not-so-good fighter who bleeds like a sieve. Maybe it’ll be funny. But that’s not what Chuck (it’s theatrical name) is at all. No, Chuck Wepner is a real guy and was a real fighter. At number eight in the world he became next in line to take on George Foreman once the big man took out Muhammad Ali in Zaire. Foreman of course lost, but Chuck got his shot anyway with The People’s Champion. Wepner earned his fame.

That’s a crazy tale of beating the odds. Who wouldn’t watch a film about a New Jersey folk hero taking on the greatest fighter to ever wear gloves even if his road plays as though it was fated? Do it correctly and you could have the type of sympathetic everyman conquering personal demons while showing the world what he’s made of that hasn’t really been seen since Rocky. Only therein lies the hiccup. You can never tell Wepner’s story without what happens after his parallel journey to the Italian Stallion because he inspired Rocky Balboa. And what that type of fame did to him makes it difficult to feel much empathy unless the film allows us to laugh with Wepner at his foibles rather than at him alone.

For the most part Falardeau’s film does exactly that. Written by Jeff Feuerzeig and Jerry Stahl before Michael Cristofer and star Liev Schreiber re-worked things, Chuck plays as though an anecdote told by the man himself. Wepner (Schreiber) strings us along to show how someone with the gumption to go toe-to-toe with Ali could eventually find himself in a ring opposite a bear. He’s narrating with self-deprecation, a modicum of regret, and very little guilt. What he does isn’t always moral and he most certainly hurts a lot of people before redemption, but everything that happened did get him to where he is today. Chuck understands the error of his ways and is shown to pay the price. So why not have some fun sharing the juicy details?

Because despite the authentic hardship endured with his wife (Elisabeth Moss‘ Phyliss) and daughter (Sadie Sink‘s Kimberly)—and boy does the former put him in his place when necessity strikes, highlighting both her strength and his narcissism—you’ve cast Jim Gaffigan and Jason Jones as Chuck’s best friends. Here are two nerds bumping cocaine and acting fools while the guy they affectionately call “The Champ” attempts to pretend he’s bigger and more important than they are. But they’re exactly what Chuck is at heart, that sense of blue collar Jersey he desperately tries to hide below the surface when glad-handing celebrities and prospective clients on his liquor salesman route. He’s not a “bum” as Mick famously calls Rocky, but charm and confidence only get you so far.

They ultimately leave Chuck with little besides wasted memories that alcohol, drugs, and sex help him to forget with the enjoyment of consuming all three. We’re watching an everyman fly into the sun with eyes closed, the fear of owning success leading him to numb his senses until he’s left with nothing but the idea of what might have been. And that’s when this film is at its best—the promise of better and the aftermath of worse. I could do without Act Two and excess applauded by Gaffigan, reviled by Moss, and rejected by the cute bartender who knows all too well what getting mixed up with a guy like Chuck breeds (Naomi Watts‘ Linda). Some of it is funny, but most is simply sad and conventional.

It’s the hope and contrition of Acts One and Three respectively where Schreiber shines, his voiceover narration providing the emotional hindsight his excitement and embarrassment cannot see. There’s joy at the beginning in the ring with trainer Al (Ron Perlman) and at home with Phyliss opposite a lot of pain at the end once the lifestyle he plucked from the limelight catches up to him. As such, the standouts are those positioned to call Chuck out whether it’s Moss, Watts, or the under-appreciated Michael Rapaport as his estranged brother. It’s their ability to stop him from steamrolling them that allows Schreiber the room for complexity above caricature—no matter how true to life his manic leap before looking shtick is. Chuck is hardly malicious. He’s simply an ass.

And that’s something we can relate to no matter our interest in boxing. In many respects this isn’t a boxing movie at all. It just uses that part of Chuck’s life to understand the trajectory he takes afterward. The fight against Ali (Pooch Hall) is over before the halfway point because the real questions the filmmakers are asking concern its effect on him. How would it feel to be lauded by your hometown wherever you go? What’s it like to watch a film based on your life become a box office hit and then an Oscar winner? What would it be like to enjoy that high alone because you’ve driven everyone away and weren’t actually a part of the movie’s production in any way, shape, or form?

There’s as much schoolboy excitement when Chuck stalks down Sylvester Stallone (Morgan Spector) as entitlement—this type of duality a mainstay throughout the film. The idea that Wepner is a good, likeable guy can’t be lost because it’s necessary to understand his mistakes come from an inability to look past the moment. Schreiber nails it so that he doesn’t come across as a villain or pushover. When he’s in the wrong he sits there and soaks it in. When he tries earnestly to right things he accepts that the wronged party doesn’t owe him. There are lessons to be learned and we do so with him while enjoying the chaos for laughs. We hope Chuck pulls himself together so that his doing so proves commendable rather than cliché.