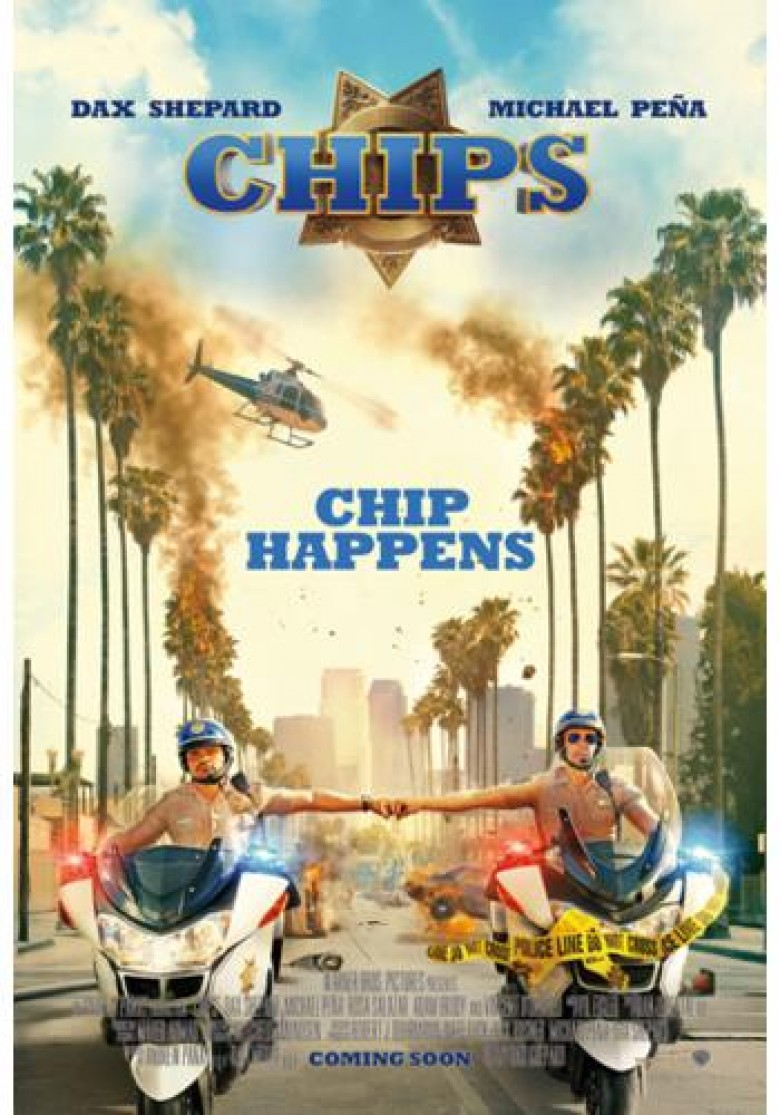 I’ve never watched an episode of “CHiPs” so I don’t care whether or not the original Jon Baker (Larry Wilcox) and Francis Poncherello (Erik Estrada) pulled their guns during six seasons of television as some on social media have enjoyed touting they didn’t since the trailer hit. I will, however, admit I’m glad writer/director Dax Shepard didn’t feel beholden to such a streak of pacifism because I don’t see how it would have been entertaining for 90-plus minutes. And if his CHIPS remake is anything, it is that. The comedy is obvious and the action crucial considering Shepard is a motorcycle racer/enthusiast, but the dark streak he infuses proves an unexpectedly welcome addition. This Jon (Shepard) and “Ponch” (Michael Peña) will definitely need plenty of firepower to survive.

He lets us know early too thanks to an effectively serious armored truck heist ending with a man jumping to his death from a helicopter. The decision to make Peña’s “Ponch” an undercover FBI agent only augments the shift in tone by escalating the show’s light-action shenanigans in the California Highway Patrol to full-on agency-pursued armed robbery. He’s only on the west coast because his Miami-based captain (Isiah Whitlock Jr.) loaned him out to expose supposed internal corruption. A veteran who goes overboard on ego, aggression, and sexual deviancy, “Ponch” would do everything on his own if possible. Unfortunately for him, however, Adam Brody‘s Allen (who reviles him with good reason) heads the operation with Baker (a middle-aged, ex-extreme sports icon turned CHP rookie) assigned as his partner.

So the mythology is turned on its head with “Ponch” as the straight man (more or less) and Baker as the wild card (although over-sharing, naïve, and accident-prone man-child would be more accurate) rather than vice versa. Violence proves a key component to the former’s occupational excellence (and unorthodoxy) as well as a huge role in the actions of whom they’re chasing: Vincent D’Onofrio‘s Lieutenant Ray Kurtz. “Ponch” is prone to maiming people with his gun and Kurtz will kill anyone in the way of his scheme to build a nest egg big enough to take his junkie son (Justin Chatwin‘s Ray Jr.) abroad. So bullets will definitely fly, explosions will ignite, and out-of-control vehicles will hit anonymous bystanders hard and without mercy. No one narrowly escapes pain.

This is starting to sound like a positive review. And if it stuck to these elements to embrace the model set forth by the 21 Jump Street reboot, it may have been. Sadly CHIPS instead doubles-down on lowest common denominator humor as a way to color what could have been an effective property revision without. Shepard wants to bring the franchise into the twenty-first century yet holds too tightly to 80s-era chauvinism and homophobia—as the trailers very deliberately reveal. I’ll give him credit for trying to subvert some of these societal blemishes, but he simply doesn’t succeed. Letting strong, confident men touch penises in a hug only shows a higher plane of existence if it wasn’t set-up to be a joke about homophobia being the “normal” reaction.

The same goes for sexism as Shepard introduces a seemingly commendable bit where “Ponch” rates a woman on a scale that transcends looks. But here’s the problem: rating women through this type of locker room talk is inherently sexist. And you can only appreciate the sentiment if “Ponch” doesn’t also become a panting dog every time he sees a “hot” woman in yoga pants. Add the fact that every other woman he lusts for is of the supermodel variety with big breasts shown to the audience via photos on his cellphone and all goodwill evaporates. Even the female CHP officer who we sympathize with (Rosa Salazar‘s Ava) is introduced ogling a bike in tight pants so we can ogle her. Shepard continuously enforces this “looks first” mentality.

So the end result becomes your usual offensive shtick wrapped within a not-so-bad action-based plot. For many this is enough as I heard a woman scream, “I love that guy” twice during stunt-based sequences involving Shepard. He is genuinely funny and his rapport with Peña—who’s also very funny—works to keep us entertained. I personally enjoyed the more violent moments (a beheading and the loss of fingers for example) because they arrive in ways that shock for comedy’s sake. They serve the plot as far as forcing the bad guy’s hand and ensuring the cop who cannot hit the broadside of a barn with his handgun must shoot, but they also let us have some good, unsavory R-rated laughs. Shepard makes property destruction and bodily injury funny.

That’s a success. Him playing the fool trying to always do the right thing while “Ponch” hopes to fit in and not constantly be a focus of attention (considering he’s undercover) is successful. Brody’s humorous frustration-based pratfalls and Kristen Bell‘s bitchy insensitive vanity are nothing new (the latter channels her Forgetting Sarah Marshall role), but they earn easy laughs too. And if a film with way too many cameos that either prove over-long and tired (Maya Rudolph‘s Sergeant) or wasted in their brevity (Mae Whitman and Ben Falcone) finds a way to knock a couple out of the park (Ed Begley Jr. and Josh Duhamel are major standouts), well you have something worthwhile. I just wish Shepard didn’t feel obligated to fall back on clichéd gags so often.

But that’s exactly what he does. For every bit that lands, there are two that don’t (at least not in a way I would call constructive). Even the case itself is more or less an excuse for set pieces that have little to do with plot (Richard T. Jones helping the boys wreck Merrin Dungey‘s home) rather than get the CHP closer to answers. In fact, Kurtz is skeptical of “Ponch” from the start with the FBI agent’s cover getting easily blown halfway through. Nothing’s therefore natural except for the ever-strengthening relationship between the two leads, itself a direct result of their constantly needing to save one another. So in the end nothing really happens. Come for the action, stay for the laughter, and cringe through the rest.