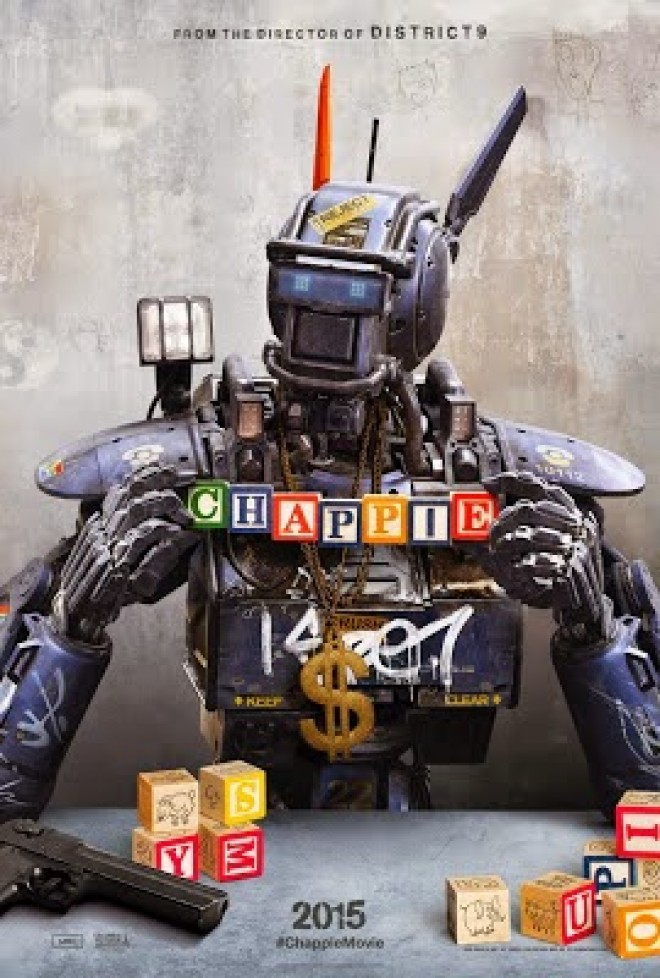 I understand the general public not wanting to go as far into sci-fi as Neill Blomkamp goes with Chappie—although they loved the similar lengths of District 9—but it’s hard to believe the critical sphere has taken such a hard stance against it. Actually, maybe it’s not too difficult to believe after they’ve railed against it for months, anticipating a bomb due to the writer/director’s admittedly failed sophomore effort Elysium. In direct contrast to their relish at taking it down, I found it to be very good. It’s RoboCop for the twenty-first century in both style and content with bursts of Paul Verhoeven‘s violence tempering the cerebral topics of artificial intelligence and the human soul. Blomkamp and wife Terri Tatchell depict a scarily plausible future along with the glimmer of hope hiding within their Pandora’s box.

The seeds of this militarized AI have been with Blomkamp for over a decade now with his debut short Tetra Vaala two-minute faux trade-show commercial for the “scouts” that became Chappie. In it he posited benefits of a robotic army that could be rebuilt and recycled when a police force of humans couldn’t. It spoke of a brave new world under the guise of peace—a wonderful idea on paper before the hubris and greed of mankind intervene.Chappie similarly begins with a news cycle recap of 2016 Johannesburg events leading to the machines’ creation and implementation. Soon after arrives the drive for more in both logical directions. The “scouts” inventor Deon’s (Dev Patel) search for an intuitive/emotional AI and competing engineer Vincent’s (Hugh Jackman) desire to scorch the earth with brute force, no questions asked.

It’s a great reversal of clichés where the robot usually proving unable to see the value of life against an efficient solution to a problem becomes the voice of compassionate reason while the “moral” man able to discern right from wrong accepts avoidable collateral damage to witness his dream. So simple and universal, just as no computer is smarter than its user, the threat of a machine uprising stems from man’s ego reaching too far. At what point does preserving life cease being enough? When does it become more important to save life? Watching peace takeover as status quo is less flashy than actively creating it through force. Unfortunately, the only reason to fight for peace is if turmoil rules the streets. Vincent is therefore very much of the “break a few eggs to make an omelet” mindset.

Blomkamp’s ability to give interesting sci-fi conceits mainstream appeal makes the film less about Deon versus Vincent and more about the potential of their life’s work. They are both cut from the same cloth—divorcing parents, if you will, trying to imprint their child with their ideals to be its favorite. Deon might have been working towards coding an artificial consciousness, but he too began devising a way to oppress an out-of-control and dangerous populace. He believed these weapons could be programmed to judge situations, calculate who needed protection and who didn’t. In contrast Vincent wanted to retain control by tethering his MechWarrior behemoth to his mind. So it becomes a question of bloodlust, generalizing the divide between scientist and soldier with Deon birthing autonomous life and Vincent masking his desire to kill with impunity.

Whereas some straight sci-fi would focus solely on their dynamic, however, Chappie pushes it to the background as sense of good versus evil looming above the titular being’s existence. Instead of being imprisoned within a scientific sphere warped into an arm’s race steeped more in economic success than altruism, Chappie (Sharlto Copley) is left in the hands of real world people at ground zero. This is a crucial choice so he can evolve naturally without any pre-programmed notion of purpose. This is life—the sentient choice to make mistakes and become what you personally wish to become. It’s not about Deon lording ownership to push Chappie into promising nonviolence or Vincent using an unpredictable and malleable autonomy as reason to scrap the program and replace it with his own. It’s about Chappie’s ability to ignore both.

The people who bring him up in the few days his damaged body provides life may not be the most exemplary, but they are family. Ninja and Yolandi (played by Die Antwoord duo Ninja and Yo-Landi Visser seemingly as their real-life zef personas) along with Amerika (Jose Pablo Cantillo) take Chappie under their wing as a means to an end. They kidnap Deon to find an off switch for the “scouts” in order to pull a heist and get warlord Hippo (Brandon Auret) off their backs. Discovering his experiement in the process as a potential bodyguard proves an advantageous wrinkle. While Yolandi and Amerika take to him as a living being quickly, Ninja still sees a weapon much like the outside world and Jackman’s Vincent. It’s not long, though, before he understands how special he is.

There’s humor in Chappie’s upbringing because the whole concept of a robot evolving as a child on an accelerated pace is hard to fathom without it. And with that capacity to laugh at his wonder, mimicry, and stumbles comes a human connection to his emotions as well. No matter how much these criminals learn to love him, they still lie so he will follow them into doing what he knows is wrong. Chappie’s realization of this truth is devastating, his ability to forgive inspiring, and the drive to save those he loves a miraculous feat only living in the “shit” could teach. Blomkamp and Tatchell provide him a human trajectory that’s believable in such a short time because he’s dropped into the chaos and left to fend like each of us. Life’s value isn’t learned in a laboratory.

As with Blomkamp’s other films, the production design and graphic work is impeccable. There was never a moment where I thought Chappie didn’t belong. The way he interacts physically with actors is authentic as well as his childlike fear for the unknown. Watching him adopt Ninja and Amerika’s mannerisms is both hilarious and paramount to seeing him as a living being trying to adapt and survive. But no matter how far he skews into the underworld life of crime, he and his “family” will never match Jackman’s splendid scene chewing as the amoral Vincent. His character embodies the totalitarian threat of government, playing the numbers game for control. It’s unsurprising then that his actions play a huge role in showing Chappie the light. There’s nothing like experiencing the deeds of a monster to acknowledge humanity and love’s importance.