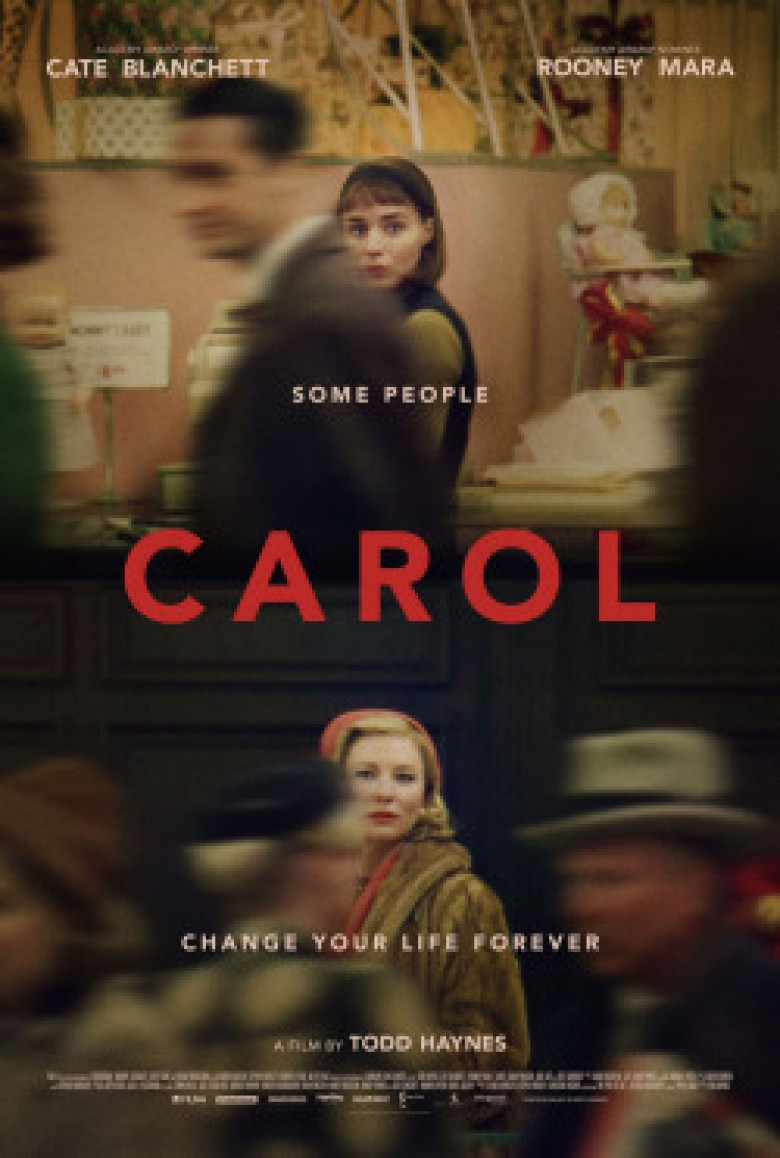 "How many times have you been in love?”

Director Todd Haynes‘ latest period romance Carol is nothing short of impeccable. From the acting to the cinematography to the art direction to Carter Burwell‘s gorgeous score, this thing is flawless in execution to the point where it should be rendered a clinically cold piece devoid of the immense emotion captured within each scene. Somehow these meticulous camera set-ups and intense expressions retain the warmth necessary to experience its characters’ love—a love in its purest form. The story is brimming with complex relationships and complicated New Yorkers all bustling around as the calendar year changes from 1951 to 1952, people without a cruel bone in their bodies pushed to the brink of sanity and patience because society’s holier than thou moral code desires sorrow rather than scandal.

The source novel The Price of Salt was written by Patricia Highsmith in 1952, but it didn’t bear her name until 1990 when it was republished as Carol. You’d like to believe her use of pseudonym Claire Morgan was due to her debut suspense thriller Strangers on a Train‘s success and the thought that people wouldn’t buy a follow-up in a different genre, but being the 50s we know it had more to do with content and it being semi-autobiographical. First adapted by Highsmith’s friend Phyllis Nagy all the way back in 1996, it took close to two decades before everything finally fell into place. The screenwriter felt a responsibility to the author to deliver a faithful transfer and by all indications she did the late Highsmith proud.

At its core Carol is a tale of love at first sight and the messiness that unsolicited bond manufactures. More than that, though, it’s a poignant document of personal evolution towards clarity and acceptance in oneself no matter the external interferences. It’s about taking the high ground when everyone else is crawling on the floor and about how giving yourself over to someone you love who loves you back is the farthest thing from being selfish as possible. Whatever happens to Carol Aird (Cate Blanchett) and Therese Belivet (Rooney Mara) as a result of their affair is inevitable. If not with the other, the fallout would have occurred through someone else’s participation. Belittling the connection shared—an authentic, electric connection—only makes what happens all for nothing.

But that’s what we do. We martyr ourselves, sacrificing our happiness so others can be happy instead. And we especially do this for our children. So learning of Carol’s ill-fated marriage to Harge (Kyle Chandler) brings with it an uncertainty in regards to their daughter Rindy (Sadie and Kk Heim). The open knowledge that a major component of their separation is Carol’s attraction to women proves an interesting wrinkle that begins in a place of remission before its devastating potential in the eyes of 1950s law rears its head in as ugly a manner as possible. The question soon becomes whether it’s healthier for the child to grow in a home of tempered spite—a prison where appearances hide a deep-seeded sense of resentment—or with the truth.

The film is mostly from Therese’s vantage with the opening a prologue to an unlikely adventure yet to come. We enter on the coattails of Jack Taft (Trent Rowland), a trench coat-wearing fresh-faced citizen of New York hitting the bar before his night begins. In the distance we see Carol and Therese at a table through a voyeuristic lens that put me in a state of dread straightaway knowing the scope of their relationship going in. Is this going to spell tragedy? Is he friend or foe to their union and the wellbeing of characters we’ve yet to truly meet? Haynes drops us into the fray and erases our preconceptions with a friendly, “Hello!” Jack simply knows Therese, his arrival to their table sending Carol on her way.

It’s then through Therese’s memory of what came before that intrusion that we properly meet them and understand what brought them to a place of genial yet cold goodbyes. This is when we see the first silent stare of locking eyes between them: Carol standing at a department store train set with mischief in her head and Therese behind a doll counter unable to look away. The camera becomes the young girl’s vision, static until a quick jolt of sound sweeps our view to the customer stealing her attention away. It’s a beautiful depiction of attraction, curiosity, and lust portrayed in a way we can all relate to from our own experiences gazing at a stranger odds say we may never meet again. But these two do.

What follows is Therese’s rebirth as though from the haze of a past life she’s always kept at arm’s length but never knew why. The feelings boys like Richard (Jake Lacy) and Dannie (John Magaro) have felt for her that she never could return have rushed to the forefront of her thoughts whenever Carol lingers in her mind. It isn’t lecherous in the slightest despite the age difference—this affair begins with sexual chemistry but it’s forged by respect and intellectual compatibility transcending the physical. Therese is literally swept away and saying, “Yes” to every idea Carol has despite them being identical to questions Richard asked first. And who can blame Carol for asking when her husband has taken the one thing keeping her sane away?

Every relationship is fully-formed whether the unrequited love of Richard, the frustrated rage mixed with hopeful optimism of a new start from Harge, or the intriguing partnership of Carol and best friend Abbey (Sarah Paulson) with so much history that somehow proves the least melodramatic of them all. This is a credit to Haynes and Nagy as well as Blanchett and Paulson for bringing these characters to life in a way that we can trust them saying how their friendship doesn’t pose Harge or Therese a threat. It’s an unbreakable union between confidants, one that may have earned outsiders’ mistrust but now serves only as the foundation of strength they each need. Add in Rindy, divorce lawyers, and more and you can see the messiness risking absolute destruction.

Blanchett and Mara go through the ringer of highs and lows with external pressures infecting their love. These are two powerhouse performances that transcend gender and age to become life itself. One is closed off, isolated out of fear of losing her daughter, and the other unable to exit the shell of manufactured normalcy that’s consumed her. Only through each other can they cut through the noise and be themselves, but the success of it lasting continuously grows smaller. But what if they can find happiness? What if those around them are able to understand, despite their disapproval or disappointment, that those they love are happiest in another’s arms? That hope is enough—a hope rendering their time together, however brief it was, worth whatever comes next.