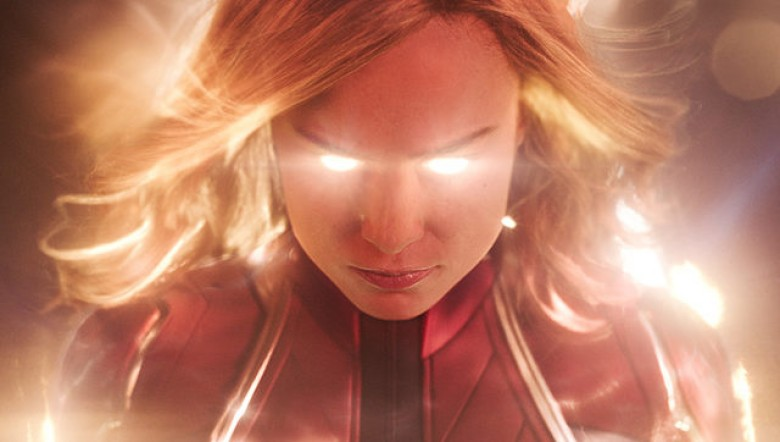 With the snap of his fingers, Thanos made half of Earth’s population disappear. It was the Marvel Cinematic Universe’s most harrowing climactic cliffhanger and it did possess an emotional response despite knowing most if not all of our beloved characters would find their way back before the war was officially over. With so many broken heroes, however, who could lead the necessary response? Tony Stark? Steve Rogers? No. When Nick Fury (Samuel L. Jackson) saw what was happening, neither of them was on his mind. He instead dug out a modified pager and pressed send before fading away into oblivion himself. The logo that came up on the screen was one we hadn’t yet seen, but fans of the comics knew exactly what it meant.

Marvel has been planning a Captain Marvel movie for years without a relevant way to introduce the most powerful hero of them all. Carol Danvers (Brie Larson) is a human and therefore tied to Earth, but she’s also imbued with Kree power and thus alien too. With Guardians of the Galaxy already playing in its own cosmic sandbox to great comedic effect thanks to James Gunn, how could the studio justify another such origin knowing she’d arrive as a near invulnerable entity to supplant even Captain America as the de facto Avengers leader? I’m certain they could have easily found a way and yet I can’t fault them for saving her until her strength could be put to use as both a savior and path towards the future.

Because that’s what Carol Danvers is in the grand scheme of things to Kevin Feige and company. She’s the deus ex machina who will swoop in and save the day in Avengers: Endgame. Anna Boden and Ryan Fleck‘s film can’t ever become an Iron Man or Doctor Strange wherein the character is introduced on its own terms. You can’t provide a bigger disservice to this type of over-arching universe because you’ve already cemented its trajectory. This is why there are so many credited writers. Nicole Perlman and Meg LeFauve each came with their own ideas that Marvel liked enough to hire both as a team to get the ball rolling. As the years went on, they left to pursue other jobs while Phase Three of the saga solidified.

You could then say that Geneva Robertson-Dworet and later Boden and Fleck themselves were tasked to fill in the blanks. They had to remix what Perlman and LeFauve brought as far as characterization and origin so that it fit what Infinity War demanded: namely who is Carol Danvers and why has she been gone long enough for no one to even acknowledge her existence? Nick Fury becomes the through-line (with a surprisingly flawless de-aging process that works to a lesser effect on Clark Gregg‘s rookie agent Coulson). This is ultimately his origin as well—the event that opened his eyes (he still has both here) to the extraterrestrial dangers that await if he doesn’t uncover more heroes for his initiative. Captain Marvel is built as a feature-length flashback.

On one hand it’s set-up for failure because there’s no way it can get out of its own way as far as its larger purpose moving beyond the character itself. On the other, however, it has the pressure of needing to be more than the franchise’s first woman-led chapter taken off its shoulders. Being a crucial part of the puzzle and wealth of expository fan service means it doesn’t live or die on whether it equals its predecessors. Does the character deserve better? You’re damn right. But Boden and Fleck make the best of a handcuffed situation. Beneath the very obvious progression forward, there’s still a person here with a past and present worthy of an emotive arc. And frankly, having that arc go the opposite direction is refreshing.

Rather than watch Carol Danvers take her human intangibles and leverage them into becoming a hero, we witness as a soldier of war rejects the indoctrination of success via detachment to realize that way of thinking numbs us to the cost being paid. She’s on Hala at the start, a ward to Yon-Rogg (Jude Law) under the watchful eye of an AI known as Supreme Intelligence. They’re Kree warriors tasked with saving the universe from the insidious hostility of the Skrulls, a race of shape-shifters who seek to destroy every planet along their path. Vers (as she’s known in her adoptive home) arrived six years prior without a memory—time spent wielding the powers given to her after being saved from the clutches of certain death.

A mission to free a spy from Skrull leader Talos (Ben Mendelsohn) soon reveals there’s more to her refugee than meets the eye. He mines her brain to unveil a past in the Air Force with best friend Maria Rambeau (Lashana Lynch) and mentor Dr. Wendy Lawson (Annette Bening). Vers has no clue what any of it means, but Talos extrapolates that Lawson was working on an engine he could use to wipe out the Kree forever. Cue an action-packed escape with some great humor on behalf of both Mendelsohn and Larson (the only thing that could make a fight between near-immortals truly fun), a crash-landing through the roof of a Blockbuster Video circa 1995 (the year True Lies hit VHS), and the race to find Lawson first.

From there Captain Marvel becomes a buddy flick with a recently enlightened to the existence of aliens Nick Fury by Carol’s side. The Kree and humans now have a common enemy and both will stop at nothing to defeat him—even if it means going against S.H.I.E.L.D. protocol to do so. A few twists and turns later (none that should be surprising to anyone who’s caught up on the cosmic politics laid out by the MCU and ABC’s “Agents of S.H.I.E.L.D.”) and the reason for Danver’s absence during the past two decades will be explained alongside her awakening to the power that comes from being flawed and letting love and courage rule above unfeeling violence. Like with Steve Rogers, abilities didn’t solve her shortcomings. They augmented her strengths.

So this is the Captain America: The First Avenger of the next wave of MCU films. We’ve spent ten years and twenty films under Tony Stark and Steve Rogers’ wings, so it was only a matter of time before the gauntlet was passed onto new blood. Instead of simply having others step into their suits, however, Feige is moving on to give Carol Danvers and T’Challa top billing. Captain Marvel thus relies more on its humor (for which Larson excels at delivering with a deadpan gaze slowing breaking into smile) than its potential for action since she could probably blow-up the entire planet with the fire emanating from her fists. This is about giving Danvers purpose so she won’t just save the day in Endgame without sufficient context.

That the film’s setting allows us get our 90s nostalgia on is the icing on the cake with nods to retail dinosaurs, grunge, and action-packed adrenaline rushes via car chases and high-flying adventures. Add a scene-stealing Goose the cat and you can almost look past the overt in-film patriotism paid for by the numerous military branches advertising themselves during the pre-show commercials. A not so subtle allusion to the plight of refugees (the Palestinians struggle against an Israeli elite force pretending to be the “real” victim came to mind often) helps to subvert it too since you know the government is too dumb to look past the fact that “America” plays the savior to realize it was actually those who ignored government orders that proved the real heroes.