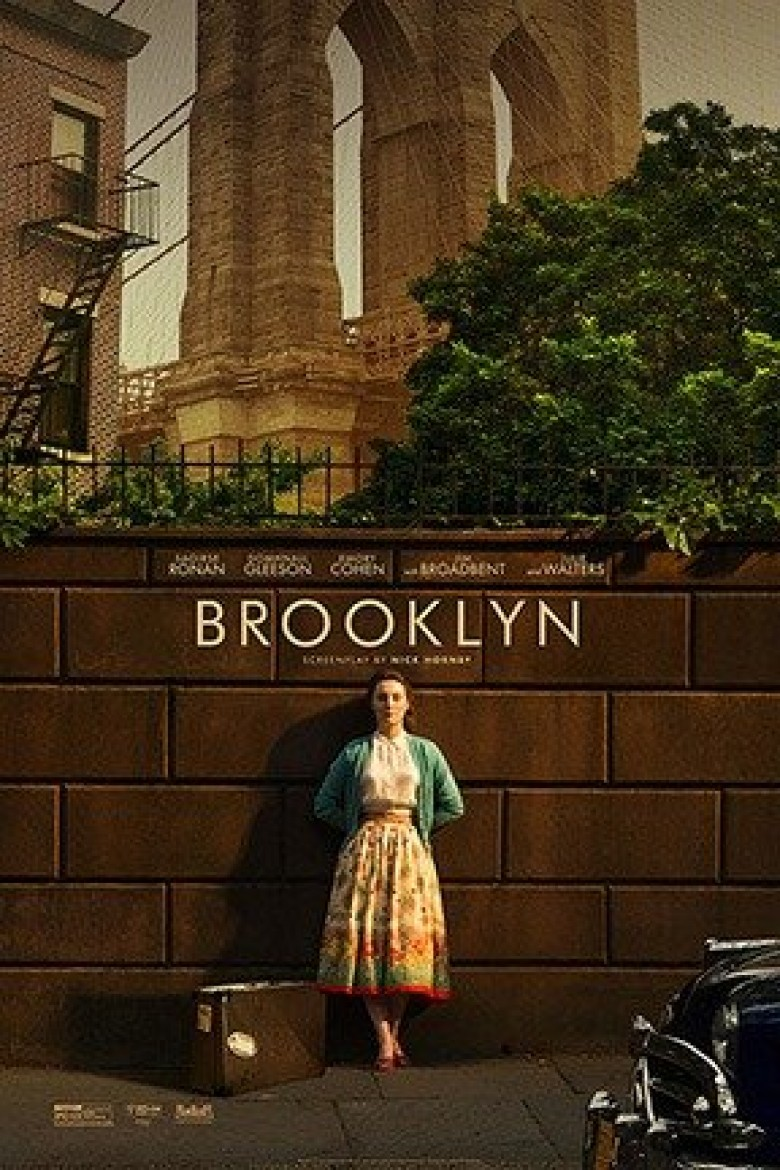 “I’m not sure I have a home anymore”

I believe a very crucial distinction should be made before going into director John Crowley and writer Nick Hornby‘s adaptation of Colm Tóibín‘s Brooklyn for those unfamiliar with the book. When I watched the trailer it appeared very much like an Oscar-bait romance with a firecracker love triangle between young Eilis Lacey (Saoirse Ronan) and two men in Tony Fiorello (Emory Cohen) and Jim Farrell (Domhnall Gleeson). To a certain extent it is, but don’t get fooled into expecting swooning melodrama to tear at this Irishwoman’s heart since the tale is more accurately defined as an historical 1950s period drama. The actual triangle therefore concerns Eilis and her two homes: Ireland and America, birthplace and salvation if you were. Her struggle becomes deciding which nation possesses her future.

The romance enters to merely spice up the pot a bit and give the audience a tangible focal point to hold onto, a signifier of who she’d be leaving behind and running towards respectively. Behind that façade is a studious, compassionate, and responsible girl simply searching to discover her identity no matter the destination. In all honesty she wasn’t even the person to choose New York City as a potential resting stop on her journey. That was older sister Rose (Fiona Glascott) who got the ball rolling by contacting an ex-pat priest in Father Flood (Jim Broadbent) to work out the details. It was the selfless act of a widow ensuring Eilis’ promise wasn’t wasted on their small, stagnant Irish village like fate had done to her.

Brooklyn quickly proves itself as a document of immigration and the American Dream—empathetic transplants who’ve adjusted so thoroughly that a return trip to the United Kingdom can’t end soon enough. There’s more to be said from Eilis’ bunkmate on the cross-Atlantic trip (Eva Birthistle‘s Georgina) taking her under wing to prepare for the stark change arriving than a melting pot allowing an Irish girl who’s never met anyone but Irish find a clean-cut Italian boy to love. Seeing this stranger open up to Eilis is witnessing the new life of adventure and success that staying home could never provide. Rather than a Miss Kelly (Brid Brennan) driving a wedge into her Irish community, America has Mrs. Kehoe (Julie Walters) doing her damnedest to see each boarder flourish.

It’s amazing how the mind can adapt and forget so soon. At first leaving Europe was a devastating process that left Eilis lonely and in tears. But then Tony’s affection turned things around. The memories of Rose and her mother (Jane Brennan) didn’t disappear; they were simply no longer burdened by the designation of happiness lost. They became a past to cherish while Tony a present bit of warmth and comfort to remind her that everything was okay. Is it convenient that she would meet such a wonderful man straight-away who’s able to turn her frown at work upside down and help encourage her to take night classes for book-keeping? Maybe. But this is a work of fiction and that joy is necessary to create the conflict to come.

A tragic death is what pulls Eilis back to Ireland—one she cannot ignore despite the new life she’s created. Promises are made and hopes are shared, but as Tony relays, “Home is home.” Had Eilis’ sense of place been altered already or would stepping foot back on native soil give her pause once the flood of emotions consumed her? Coming back is different than leaving because she knows everyone when she gets off the boat in the other direction. There’s no adjustment period, just the comfort of familiarity. And although heartbreak facilitated the return, it’s the possibilities of finding the life she wanted but couldn’t achieve a year earlier that threatens to keep her. American success opens career doors and local catch Jim offers stability and love.

On paper Eilis is the luckiest girl alive who seemingly wins the lottery with every step she takes. Her existence is in flux and suddenly she’s whooshed away to the land of promise. Her heart aches and like magic a man able to complement her aspirations asks her to dance. Sadness returns her to the place she needed to leave behind and she’s instantly showered with all the tangible and intangible riches she could have ever fantasized to achieve. But where does it all leave her besides in the middle of an impossible choice? The worlds tugging her back and forth are equally wonderful so circumstances aren’t able to make the decision easy. Love, success, family—they’re all meaningless if the answer in her heart leaves them behind.

It’s some heavy stuff in an era when you can’t simply buy a plane ticket and up-root who you are every year when things get tough, so you can imagine tears will be shed and permanent goodbyes shared. Luckily the storytellers allow for a constant strain of infectious humor to cut through depressingly tough choices at hand. Whether it’s Cohen’s genuine smile, little eight-year old Frankie Fiorello (James DiGiacomo) and his hilariously biting precociousness, or the giggle-twins compromised of Eilis’ boarding room neighbors Patty (Emily Bett Rickards) and Diana (Eve Macklin), light-hearted entertainment is found just around the corner. The question becomes whether that laughter can compare to family and heritage’s pull. It’s hardly surprising to discover what unconscionable, periphery ego ultimately awakens her to a decision.

The look of 1950s Brooklyn and Ireland is beautiful—each glimpse more idyllic than the next to render the film a fairy tale of sorts where fate delivers so great a hand that nothing can be left to chance. This is a conscious aesthetic putting every bit of attention squarely on Ronan’s extremely capable shoulders to lead us through the sorrow, glee, romance, pain, and clarity necessary to unearth what it is that actually matters. And while none of that sounds simple, the story itself proves exactly that. There’s no adultery or wrongdoing on behalf of our heroine to cause any explosive chaos. Instead America and Ireland purely deliver Eilis pitches of a lifetime. Once her pick is firmly declared, there’s really nothing else we need to know.