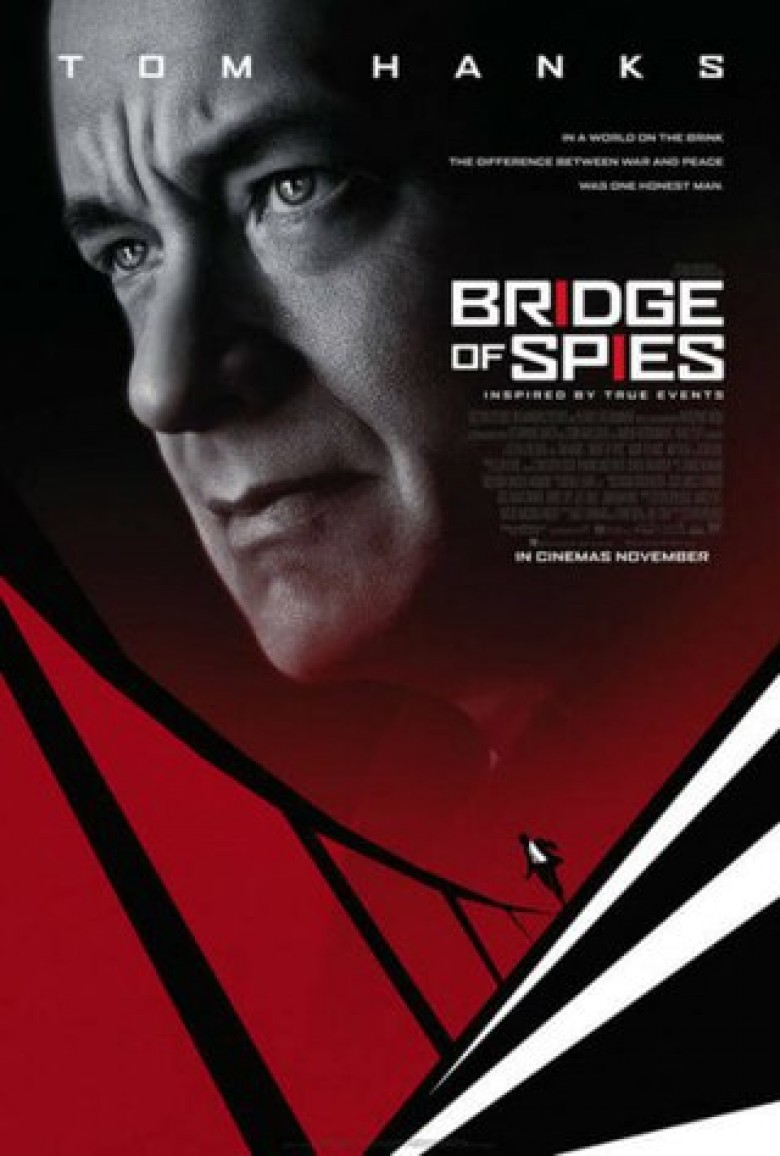 “So everyone will hate me, but at least I’ll lose”

I’m sure it was a foregone conclusion that Steven Spielberg would choose to directMatt Charman‘s Bridge of Spies himself the instant it crossed his Dreamworks desk. The story possesses all the earmarks the director has gravitated towards for years, namely an unlikely hero finding himself in the position to do something historically extraordinary to save those who aren’t. “Unlikely hero” because who would peg an insurance lawyer—reveling in smooth talk about his firm’s willingness to cover one collision despite five motorcyclists being hit by the policy holder—capable of going to East Berlin with zero protection to negotiate a trade for two American citizens? How about his helping bring home just under 10,000 overseas prisoners in barely a decade? James B. Donovan makes a great story.

With a Joel and Ethan Coen rewrite—perhaps responsible for adding the effectively naturalistic humor rising to the surface regardless of its otherwise serious drama—Donovan’s (Tom Hanks) tale begins three years before his confidential, CIA-sponsored journey to the newly walled-off Cold War hub in Germany. It starts with his involvement in the case of assumed Soviet spy Rudolf Abel (Mark Rylance); a case he didn’t seek out. Cajoled by his bosses because they know the exposure will be good for the firm even if a conviction is inevitable, Donovan is ultimately tasked with defending this foreign entity to ensure the judicial system won’t simply kangaroo-kick him to the electric chair. While all parties knew he’d get this job done, no one figured he’d try doing it well.

This case could be its own feature due to its political and courtroom intrigue. In fact, the prologue of Abel’s capture might be the film’s best sequence—a silent cat-and-mouse game between this quietly composed painter and a slew of suited G-Men following behind. I’m not joking about silent either as one audience member screamed, “Sound!” believing the theater had forgot that all-important sensory component. Instead it’s a purely aesthetic decision to show this gentleman working at his canvas until the phone rings. We infer what’s being said since he utters no response. And from there he’s lost and then found, walking to the Brooklyn Bridge. Even his arrest is muted, wishing only to procure his teeth from the bathroom and clean his paint palette.

For those unfamiliar with the particulars of Donovan’s negotiations opposite the USSR and GDR to retrieve pilot Francis Gary Powers (Austin Stowell), this opening can be disorienting. Shouldn’t a U-2 surveillance aircraft plummeting to the ground over Russia be our starting point? It’s fascinating how Abel and Donovan’s relationship evolves into the bargaining chip necessary for Powers’ survival, especially when the country so vehemently hated both. A spy and the lawyer bringing up Constitutional rights as though his client deserved a fair trial only brought out the anger of Cold War nuclear fears through evil eyes in public and bullet holes at home. Seemingly the only American not letting emotion cloud his judgment, Donovan refused to shortcut justice. He refused to crack because Abel so obviously never would.

Unable to know what the future might hold, Donovan’s background in liability insurance allowed him to realize the potential horror that could. And just as that light bulb goes off—in part due to Abel’s sheepish request for drawing materials in prison, seeking compassion by positing that we’d want the Soviets to treat any POWs with humanity too—we meet Powers, Joe Murphy (Jesse Plemons), and Agent Williams (Michael Gaston) readying to conduct their own spy work. Spielberg and his screenwriters expertly handle this back and forth with each transition proving thematically relevant and crucial to the story’s progression despite never feeling contrived. Abel’s incarceration might be effective on its own, but its reveal as exposition for the bigger play to come might be even better.

It is funny to watch the era-specific incarceration processes, cleansed of the torture and amorality of the past decade-plus post-9/11—especially since the Soviets are shown practically waterboarding Powers. You can’t help sense a bit of jingoism in this depiction. The “pure” Americans letting the reviled Abel paint and smoke in peace while Powers is refused the decency of darkness for slumber. It’s in contrast to the attitudes Donovan comes up against too. Judge Byers (Dakin Matthews) refuses to follow the rulebook his job hinges upon, Agent Hoffman (Scott Shepherd) laughs at Donovan for upholding attorney/client privilege, and a beat cop berates the lawyer at his home after an attack, yet Abel’s stay is serene? Something doesn’t quite compute, American heroism-centric plot or not.

We can believe that this treatment is Donovan’s doing and perhaps it was. So it’s more nitpick than actual issue derailing the film’s success. The truth is that Bridge of Spies is otherwise nearly flawless in its patriotic depiction of regular Joe determination in the face of international espionage. Just as the Abel case intrigues for its behind the scenes machinations, so too does Donovan’s engagement with KGB operative Schischkin (Mikhail Gorevoy) and GDR emissary Vogel (Sebastian Koch). He enters a warzone with more questions than hopes let alone answers and he stands tall, feeling everyone out to understand their motivations and limits. Throw in the innocence of an American student-turned prisoner (Will Rogers‘ Frederic Pryor) and an easy one-for-one swap turns desperately complicated.

Through it all, though, we never lose the Spielberg sensibility of pure history—albeit sanitized save one violent burst—and complex characterizations. I credit this to the humor because it disarms tension and helps us empathize with all. We must respect Abel (Rylance’s sweet dignity steals the film) to believe Donovan’s connection and care about Powers and Pryor’s plight to dream they might both be freed. That’s asking a lot, especially when the focal point switches Donovan’s attention so often. They pull it off thanks to Hanks grounding the action in his everyman depiction. He isn’t CIA, military, or possessed by the interests of either. He’s merely a man who discovers his talents are above keeping insurance companies rich. It’s all a matter of whom he lets be “his guy.”