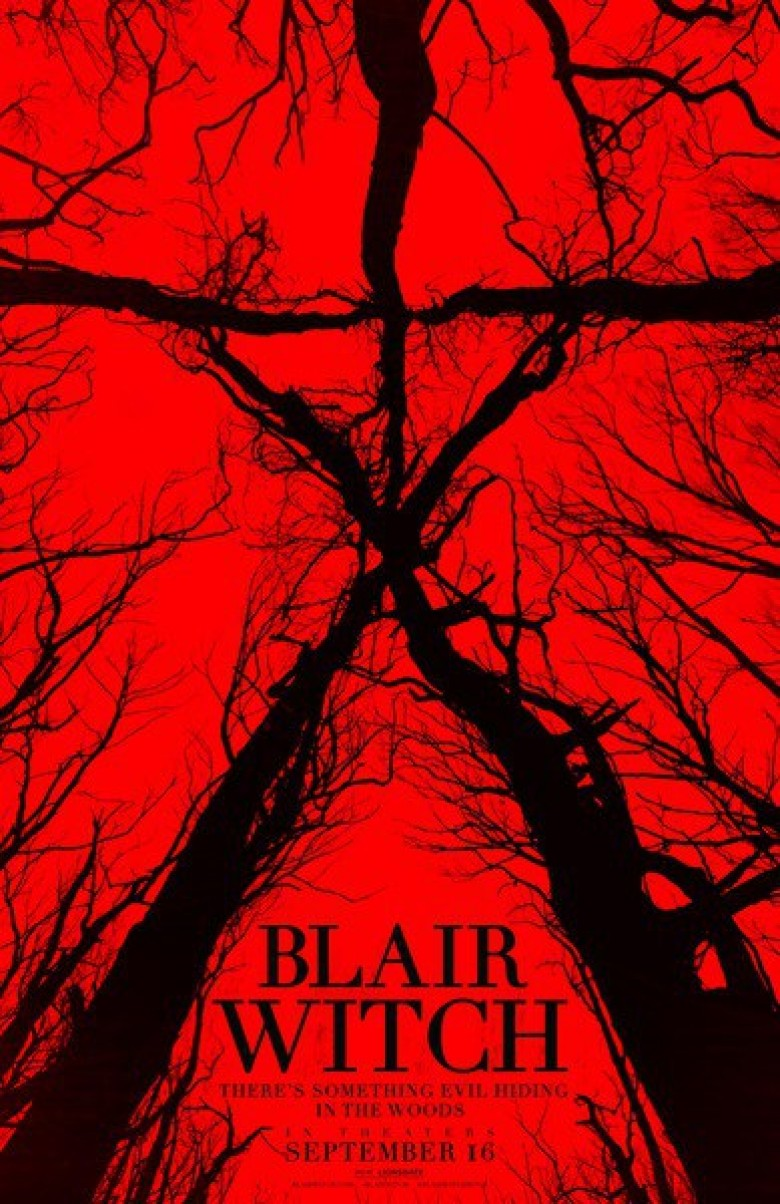 It was only sixteen months after the release of The Blair Witch Project that Joe Berlinger‘s sequel Book of Shadows bowed in an attempt at striking while the iron was hot. The film that was ultimately released into theaters wasn’t his cut—whether this fact has any bearing on quality remains to be seen—and inevitably went on to get panned by critics and audiences alike. Any plans for more installments were scrapped and the legend of the Burkittsville monster was mothballed. So why then has a new tale based upon its mythology surfaced seventeen years later? Maybe it stemmed from a conversation between original directors Daniel Myrick and Eduardo Sánchez and screenwriter Simon Barrett or maybe it was happening anyway. Either way, the Blair Witch is back.

Written by Barrett and directed by Adam Wingard (the duo behind You’re Next andThe Guest), the veracity of Blair Witch‘s found footage element was never going to be questioned. No amount of viral advertising will change anyone’s mind about whether or not the events onscreen actually happened in 2014. They didn’t. Opening this latest sequel with an intertitle explaining how James Donahue (James Allen McCune) and friends went into the woods to find his sister Heather before disappearing and leaving their cameras behind is homage at best, the earmark of a remake at worst. The reality that this is ostensibly the same film doesn’t diminish simply because its characters are different and those that came before are acknowledged. We therefore have to ask ourselves if that matters.

This was admittedly my biggest worry: would I care anymore? Barrett, Wingard, and producer Keith Caldercould talk about this rebirth being fresh and unique all they want, but the comparisons are unavoidable as long as it’s still found footage. The idea to veil it under subterfuge until the eleventh hour of its premiere by going so far as having Lionsgate cut a trailer with the name The Woods was genius, but the movie has to stand on its own two feet once the initial buzz of excitement dies. And while today’s generation can sit and watch without any preconceived notions, I’ve already heard the stories. I’ve already waded through exposition and saw what happened to Heather and her crew. So when exactly does the originality kick in?

Don’t get me wrong, it’s cool to watch the history unfold almost two decades later if only to compare and contrast the technology. We’ve gone from 16mm and VHS cassettes to flash memory cards, DV tapes, and drones. Budding filmmaker Lisa Arlington (Callie Hernandez) is even fitting James and friends Peter (Brandon Scott) and Ashley (Corbin Reid) with earpiece cameras that are GPS-enabled. Welcome to the twenty-first century, fellow witch hunters. Aesthetic and upgrade aside, however, everything else is very much the same down to the bottle of scotch shared in their motel room before setting out. The only significant difference to this point is the inclusion of local guides Lane (Wes Robinson) and Talia (Valorie Curry). They’re who discovered new footage that sparked James’ quest.

Without going into too much detail, the addition of locals does add the intrigue needed beyond simply bolstering character numbers for Barrett and Wingard to kill. The main purpose of their presence is to give us two distinct groups of campers able to go in separate directions and therefore provide the distance necessary for a new scare tactic concerning elapsed time to hit full impact. The filmmakers weren’t lying after all because this wrinkle did get me to invest in the identical story beats with the promise for more. It puts a spin on everything we’ve seen, making us question what’s real and what isn’t. Who’s lying and who’s scared? Who can we trust and who is under the witch’s influence to lead the other lambs to slaughter?

The scares have been ratcheted up so that Blair Witch‘s finale is both longer and more intense, taking a page out of one of the most creatively successful copycats born from The Blair Witch Project‘s wake in [Rec]. If the first half cannot remove itself from its progenitor in style, substance, and frustrations, the second owes everything to[Rec]‘s darkened corridors illuminated by flashlight terror. I’m talking right down to the blink and you’ll miss them revelations of James and company’s pursuer (just wait for the Blu-Ray release when everyone will be freeze-framing to see if the witch is really covered in black hair as one women told Heather twenty years ago). So despite being original in the context of this series, we have unfortunately seen it before.

The make-it or break-it test is therefore whether these tactics are utilized effectively. My answer would be a resounding yes. Adding a more physical aspect to the off-screen frights works wonders, the crackling and breaking of trees providing a visceral reaction before a trunk falls atop one of our adventurers. Its use of stone piles and stick figures open avenues I honestly didn’t expect; walkie-talkies allowing whispers in the distance to turn into static screams a nice escalation in volume. An introduction of body horror potential is disappointingly forgotten along the way, but I believe it’s the only true instance of “plot-hole” griping. The issue of time disturbance closes all other tiny gaps—a convenient device in this way, but no less perfect in execution.

Would I rather watch a double-header of the original and [Rec]? Yes. But “rather” doesn’t mean I wouldn’t watch Blair Witch too. If its influences were erased from memory, Barrett and Wingard would have a bona fide classic on their hands because those last ten to fifteen minutes are insanely tense. Even if it hews too close for my liking, they’ve successfully honored Myrick and Sánchez’s legacy. The moral quandary of filming amidst tragedy—something I liked a lot about the first— is glossed over and showing the monster—no matter how briefly—is a boldly divisive move, but I’d be lying if I said I wasn’t riveted throughout. Too familiar to be great yet too good to be dismissed, it turns out I still cared after all.