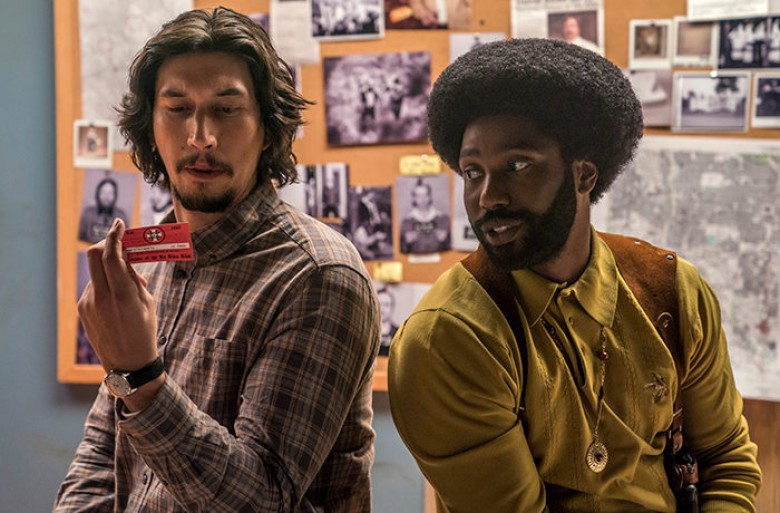 “Did you just use your real name?”

The fact that Spike Lee‘s BlacKkKlansman is based on a true story is absolutely crazy. A black rookie cop in Colorado calls the Ku Klux Klan, wins them over with racist rhetoric, and talks his precinct chief into approving an investigation wherein a white officer would pretend to be him in-person before ultimately coming face-to-face with Grand Wizard David Duke? You literally cannot write a more scathing commentary on the hubris of white supremacists or the courage of those fighting the good fight against it. And with the juxtaposition of a black man under a white hood proving inherently comical (just ask Dave Chappelle), it’s logical for the marketing to highlight that aspect. But there’s a lot more to this tale. It’s a Spike Lee joint after all.

This campaign is a strength because it gives the film power. Rather than sell its message to a vacuum chamber by putting the obvious parallels to today front and center, its humor piques the interest of a much wider demographic. You will get folks looking for a good laugh to sit down and revel in the absurdity no matter their race, religion, or political affiliation. You’ll get some who are simply hoping to be entertained—the type to reassure themselves that “it’s just a joke” whenever doing something blatantly racist—to revel in the over-the-top theatrics of Alec Baldwin‘s monstrous Dr. Kennebrew Beauregard, enjoy the subsequent wild ride, and perhaps have their eyes opened to the reality that they’re much closer to KKK material than they’ll ever admit.

That goal succeeds beyond what Lee provides on the surface. The allusions to Donald Trump’s America First initiative sprinkled throughout are pointed, relevant, and plainly out in the open to earn applause and derision depending on whose ears they fall upon. The footage of “alt-right” rallies—including Charlottesville for which this weekend marks the one-year anniversary of Heather Heyer’s murder—playing before the end credits shows yet again that the threat of “race riots” (in 1979 and today) have always been spear-headed by whites and their fear of losing an unearned sense of entitlement rather than the minorities seeking nothing more than equality. But just as Lee makes certain to keep much of this story’s political worth at the forefront, the human impact is never far behind.

Credit the quartet of screenwriters (Charlie Wachtel and David Rabinowitz first with Lee and Kevin Willmottmassaging things to their style) as well as Ron Stallworth (the man who picked up that phone and got the ball rolling) himself for digging deeper than the gag. This isn’t an exploitation film with a suave hero smoothly working his magic to take down the Klan. This is real life. As such, Stallworth (John David Washington) is drawn as a complex man with myriad motivations. He isn’t a character without privilege here—growing up in Colorado Springs after his parents moved him out of Chicago with a layover in El Paso. He isn’t politicized to the point of abandoning his dream to make a difference as “the enemy,” as a policeman.

Stallworth is a man torn between the color of his skin and the symbolism of his badge. When his sergeant (Ken Garito‘s Trapp) calls him naïve to think America wouldn’t ever actually let people like David Duke (Topher Grace) ascend the political ranks to accrue the necessary power to place a sympathizer in the presidency, it rings only too true. He’s engaged in a crusade because of what he stands for in his all-white department building, but it’s also a job to leverage success into a promotion. Only when he gets close to the local college’s black student union president (Laura Harrier‘s Patrice) and sees how real the KKK’s threat on his people is does it all start to become more than a game. And he’s not alone.

One could argue his partner in this endeavor (Adam Driver‘s Flip Zimmerman) is the true weapon at Lee’s disposal. While Stallworth is relatable to the black audience as a conflicted American seeking compromise and answers, someone else is necessary as far as reminding everyone else of their own vulnerability too. White supremacists don’t stop at one shade of brown. They systematically move down the line, exterminating anyone they deem unworthy of the Aryan title. And as the vile rhetoric being spewed onscreen reveals, the close second are those of Jewish descent. But just as Ron isn’t a gung-ho Black Panther ready to crack skulls, Flip doesn’t have a personal vendetta. Unlike Ron’s skin, however, Flip’s “flaw” isn’t visible. Sadly, believing yourself safe never guarantees that you are.

It’s a very relatable notion to me personally having grown up in a pre-9/11 America. My Middle Eastern ancestry was a meaningless tidbit back then. By not being listed as an ethnicity on paperwork, we would default to Caucasian because that’s what we believed ourselves to be. Only when the World Trade Center went down did the reality of my Arabic last name come into focus. Only when my heritage became the “enemy” did I have to acknowledge a part of myself that never impacted my identity for nineteen years. It’s a surreal headspace to find yourself in because, much like Flip, you realize “passing” as white isn’t an excuse or a reprieve. I see videos of Sikhs getting beat up, falsely called Arab, and witness my privilege.

That slippery slope is what BlacKkKlansman reveals. Many people in this country live with that duality, but each case isn’t equal. Flip’s experience is not equal to Ron’s. Family members of mine have the gall to say they’re an example of how “things aren’t so bad” as though they had to live with the same oppression that the black community has dealt with for centuries. They haven’t. They were white until 2001 and that thinking only proves their current station allows them to remain white. So Flip and Ron’s partnership becomes more than a means to progress the plot. The idea of them “playing” the same character opposite the KKK is relevant on multiple levels ranging between the literal and metaphorical. They cultivate understanding in each other.

So no matter how effective the suspense of this dangerous mission—and it’s taut from start to finish despite the excellent humor to prove Lee’s most accessibly entertaining work since Inside Man—it all pales in comparison to that display of empathy. The comedy can force it to come off as superficial at times, but there’s truth to the camaraderie built through trust, acceptance, and respect. It helps that underneath Grace’s pitch-perfect, heightened turn as Duke are a collective of Nazis ranging from wolf in sheep’s clothing (Ryan Eggold‘s Walter), redneck drunk (Paul Walter Hauser‘s Ivanhoe), and unabashed psychopath (Jasper Pääkkönen‘s Felix). Just like today there’s a common evil every person with any shred of humanity and morality can see and hope to combat together.

More than that is the charisma and nuance on behalf of both Washington and Driver to let their characters breathe as heroes to rally behind. The former is goofier than his father (Lee regular Denzel Washington), but he does well to lock things down emotionally when the moment arises. And Driver comes in as a steadying force, his ability to subtly move the line from assignment to personal undeniable. These two carry the film as its cooperative centerpiece: straight men to the lunacy who know when to laugh at it and when to buckle down. It’s fun to laugh at Nazis after all. It’s fun to mock their insecurities and cowardice. Eventually, though, it’s no longer a joke. They’re emboldened and delusional. And they crave bloodshed of their own making.