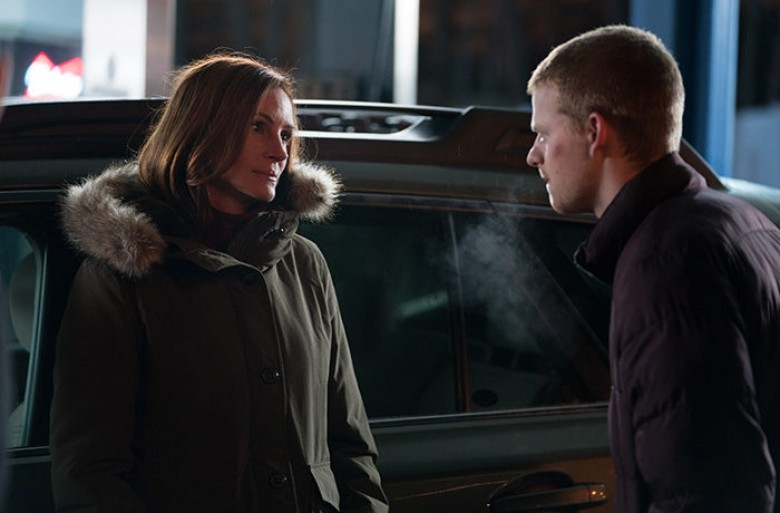 “You’re all still scared of me”

There’s no way to discuss the second of Ben is Back or Beautiful Boy that you watched without also mentioning the first. Maybe I’d think differently if the order had swapped, but watching the former last seems like the correct way to do things since it allowed me to have a fresh perspective on what these types of addict films generally do wrong. Everything I thought Beautiful Boy failed to grasp about the complex subject matter was fixed in Ben is Back if only because writer/director Peter Hedges was allowed to draw his fictional characters in ways the other’s real-life inspirations prevented. Rather than have source material leaning into stereotypes (albeit true) with a tough but open father and broken but remorseful son, Hedges wrote for potent drama.

He found the duplicity in the clichés that young abusers and worried parents provide. One doesn’t always have to be wrong and the other right. Sometimes the child can truly want to change without any ulterior motives and sometimes the parent’s delusions of a reality they can never have are more problem than solution. Beautiful Boy ultimately feels repetitious because its characters rigidly adhere to a single path towards the future with little bend since it demands for us to lament the son and admire the dad. To avoid this monotony, Hedges adds an air of mystery above his story. He puts a spin on his characters’ actions as far as intent and ability while also keeping his audience in the dark as to how bad things got.

All we know at the start of Ben is Back is that Ben Burns (Lucas Hedges, the director’s son) screwed up—not once or twice, but multiple times. We know what he did most recently was inexcusable enough to put his sister (Kathryn Newton‘s Ivy) on high alert despite their mother (Julia Roberts‘ Holly) welcoming his impromptu return home with open arms. Who’s correct in their reaction? The way Peter presents Ben proves they both are because he’s family and a lying thief. So we’re not introduced to him while trying the locked doors and windows of an empty house without cause. Peter presents him this way to keep us vigilant. Would he have stolen valuables if he found an unlocked entry point? Or was he simply cold?

What’s most interesting, however, is that Ben isn’t the only one we can’t trust. You don’t let Holly cry tears of joy at the sight of her son knowing how many times they’ve been through the rehab song and dance unless she’s as duplicitous as him. You’re allowed to empathize with her because she’s a mother who loves her kid and wants the best for his health, but that emotional takeover of her senses is a perfect example of why his being back is probably a bad idea. Ivy tries to be the voice of clarity, but she’s a teenager. She texts her stepfather (Courtney B. Vance‘s Neal Beeby) to take control and get them back on track instead because there’s a process and it’s important.

The rest of the film is a series of these two-faced events. Like when Ben picks up his phone after seeing a familiar face on the mall elevator: was he calling that person (David Zaldivar‘s Spider) or his sponsor like he told his mom? Or how about the hypocrisy of Holly’s rage when Neal seeks answers as far as why Ben is there unannounced despite her already having hid the pills and jewelry out of fear? There’s a history being unearthed with every new scene exposing how these characters show and receive love. And there’s hope that Ben is here for the right reasons. That he asked his sister to check for drugs in the attic and went to an NA meeting because he’s on a righteous path.

Peter Hedges uses the entire first half to set up these contradictions in order for us to always be on edge. He reveals the struggles this family has endured and the love they’ve shared in a way that lets expressions speak louder than words ever could. So when the second half begins with a break-in and stolen dog, their troubled past dictates their disparate responses. Neal and Ivy fear the worst while Holly attempts to diffuse the situation since Ben was with them when it happened. But Ben knows his role in the pain they all suffer goes far beyond his being the perpetrator considering everything bad he’s done has made it so they are unsafe. Maybe he didn’t break the window, but it’s broken because of him.

What follows is therefore a glimpse behind the curtain. Holly had been obnoxiously (and dangerously) positive before turning wildly aggressive at the first sign of deceit, but now she’s simply a helpless mother diving into her son’s past despite its potential to trigger a death-dealing relapse. Ben had been shifty and uncertain before settling in with genuine tears and a desire for rebirth, but now he’s forced to relive the actions of the person he was and everything he cannot outrun despite knowing he might not survive. And while the things they unearth about his former self are common tropes for this subject matter, they lose their initial sense of being uninspired due to the way they force mother and son to confront the truth like never before.

Content becomes afterthought. Rather than focus on what Ben and Holly do, Peter seeks to spotlight why. There’s power to this distinction and yet it could have easily fallen prey to contrivances nonetheless (the ending sadly can’t escape them despite possessing so much potential to let sacrifice prevail over hope). No, the reason we look beyond the strings is a result of Roberts and Lucas Hedges buying into their characters’ flaws and responsibility for what’s happened. It’s their misplaced rage, overzealousness, and poorly timed humor that supplies them an authenticity beyond sentimentality and forgiveness. Those moments when they lay into each other and refuse to pull punches are what resonate—their self-loathing and guilt manifesting as anger. It’s their willingness to self-destruct to save the other that’s real.