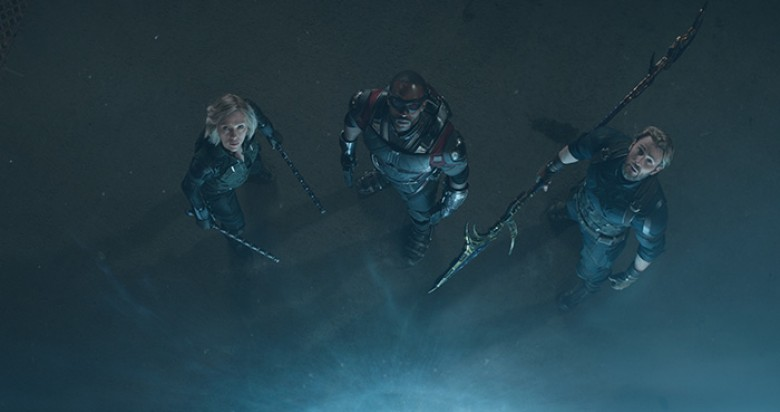 It’s been ten years since we met Tony Stark on the big screen. Ten years of serial storytelling with massive budgets, character crossovers, television offshoots, and Stan Lee cameos that took Hollywood and the box office by storm. Not even steward Kevin Feige could have predicted that type of longevity with twenty films by 2018’s completion, but here he and we are at the culmination of all those carefully laid plans. It’s been an enjoyable journey with origin tales, rights swapping, tonal shifts, and more then a few cardboard villains filling the requisite chaff to sustain the constant starts and stops where the Big Bad Thanos was concerned. Some players evolved emotionally, a few romances burgeoned, and ultimately war arrived to test and/or destroy absolutely everything.

All the misfires, surprising successes, and mythology expansions that brought space to Earth and rendered reality and time malleable have combined to create Avengers: Infinity War. And with only Hawkeye and Ant-Man on the sidelines (they have families to worry about despite their “criminal” activities in Captain America: Civil War), everyone is here to throw a punch, kick, web, bomb, branch, hammer, or cape towards the giant purple alien with a gauntlet and aspirations to widen the scope of his life’s work of mercy genocides with the snap of his fingers. Here’s a dude willing to sacrifice his own soul for the survival of a universe buckling under the weight of overpopulation, a monster that sees the hard truth confronting us with a willingness to pull the trigger.

There was only one choice screenwriters Christopher Markus and Stephen McFeely could make to ensure the sheer logistics of it all didn’t leave directors Anthony and Joe Russo with nothing more than the chaotic flailing of explosions and one-liners: make Thanos (Josh Brolin) the star. Make no mistake about it, Infinity War is his film regardless of the superheroes doing their best to prevent his acquisition of the six infinity stones they’ve discovered this past decade. No longer relegated to holograms and shadows as puppet master pulling strings of lesser antagonists born with the sole goal of dying during their film’s climax, Thanos is ready to take matters in his own hands. It may seem like we’re following the stones’ protectors, but he’s the constant. He’s the focus.

And he’s admittedly provided an arc as good as any the Marvel Cinematic Universe has seen. Does he earn it? Perhaps not considering his being a tease dangling out-of-reach made him the most two-dimensional of everyone up until this point. Either way, though, he needs it. He needs to be more than a mountain to thwart or obstacle to move. As we saw with Loki (Tom Hiddleston) and Killmonger (Michael B. Jordan), the best villains are those with complexity fighting for the “right” thing the wrong way. Markus and McFeely give Thanos that depth here with a flashback (contrived or not) and specific order as to which stone is sought next. Like Steve Rogers (Chris Evans) and Stark (Robert Downey Jr.) risked everything in Civil War, so too must he.

It’s the perfect switch in subject because the audience was trained to care about their heroes. The crowd at my screening burst into applause when Rogers made his entrance, reveling in the audacity of so many good guys being onscreen at once because Feige and company wanted the distraction. It allowed the Russo Brothers to split everyone up with Stark, Peter Parker (Tom Holland), and Doctor Strange (Benedict Cumberbatch showing how he may be the true leader the Avengers needs) going to Titan (Thanos’ home); Starlord (Chris Pratt), Gamora (Zoe Saldana), Drax (Dave Bautista), and Mantis (Pom Klementieff) heading to Knowhere; and Thor (Chris Hemsworth), Rocket (Bradley Cooper), and Groot (Vin Diesel) seeking Nidavellir. They went where Thanos would go so his story could be told.

And if it’s not him, it’s his “children” (CGI Carrie Coon and Terry Notary!) wreaking havoc in his name to provide more backstory in the process. After eighteen years of hero exposition, it was only fair to augment Thanos’ mythos. Rather than shove it all in with nowhere to go (the fatal flaw of Guardians of the Galaxy: Vol. 2‘s Ego), we receive the information influx gradually to flesh him out with every subsequent scene knowing these “Wars” were always part of two films (mark May 3rd, 2019 down for the finale). This allows for more fights (the choreography of which has never been better for these insane meet-ups), action, and hijinks because we’re working towards a problem rather than a solution. There’s time to do it right.

To my shock they did exactly that. I honestly didn’t think they had it in them to raise the stakes and drop the guillotine with enough regularity to supply the events onscreen meaning beyond empty platitudes and temper tantrums. The Russos start it running full speed too, picking up right where Thor: Ragnarok‘s stinger ended. Is it cliché to use murdered friends as motivation for revenge? Sure. But when have comic books and their cinematic brethren not been cliché? It’s time to get angry—as angry as Rogers was when Bucky’s (Sebastian Stan) life was forfeit. The universe may be at risk, but Thanos is threatening them all individually before he can make it that far. He must kill to acquire his stones and that wake breeds desperation.

If you’ve done the math you know who’ll shine on the periphery of Thanos’ mission. It’s Stark and Strange as ego point men; Wanda (Elizabeth Olsen) and Vision (Paul Bettany) since the latter is the mind stone; and Thor for being the only God on the team. Rogers and T’Challa (Chadwick Boseman) have increased appearances since Wakanda is the de facto spot for a stand-off while Quill and Gamora earn drama considering she is Thanos’ “favorite” daughter, but they serve their purposes much like Banner (Mark Ruffalo), Black Widow (Scarlett Johansson), and Nebula (Karen Gillan). The others fight, help, and disappear once their brief, shoehorned inclusion is complete (sorry Letitia Wright fans, but Shuri gets three lines of dialogue). But that’s okay because this isn’t the Avengers’ film.

This is the cost of hubris, the potential defeat they have avoided too long (if you didn’t start feeling Marvel fatigue in 2015, you’re a better fan than I). Finally the Avengers are the pawns in a game much bigger than their Earth-centric scope. They get to be the pieces moved around the board that must be sacrificed in order for the opportunity of victory. Strange can see the future and, as expected with such long odds, only one version see them winning. The beauty of this installment over those that came before is that this might not be that one. None of it really matters since time and reality are bendable, but even so the eventual cliffhanger should leave those invested in this universe with mouths agape.