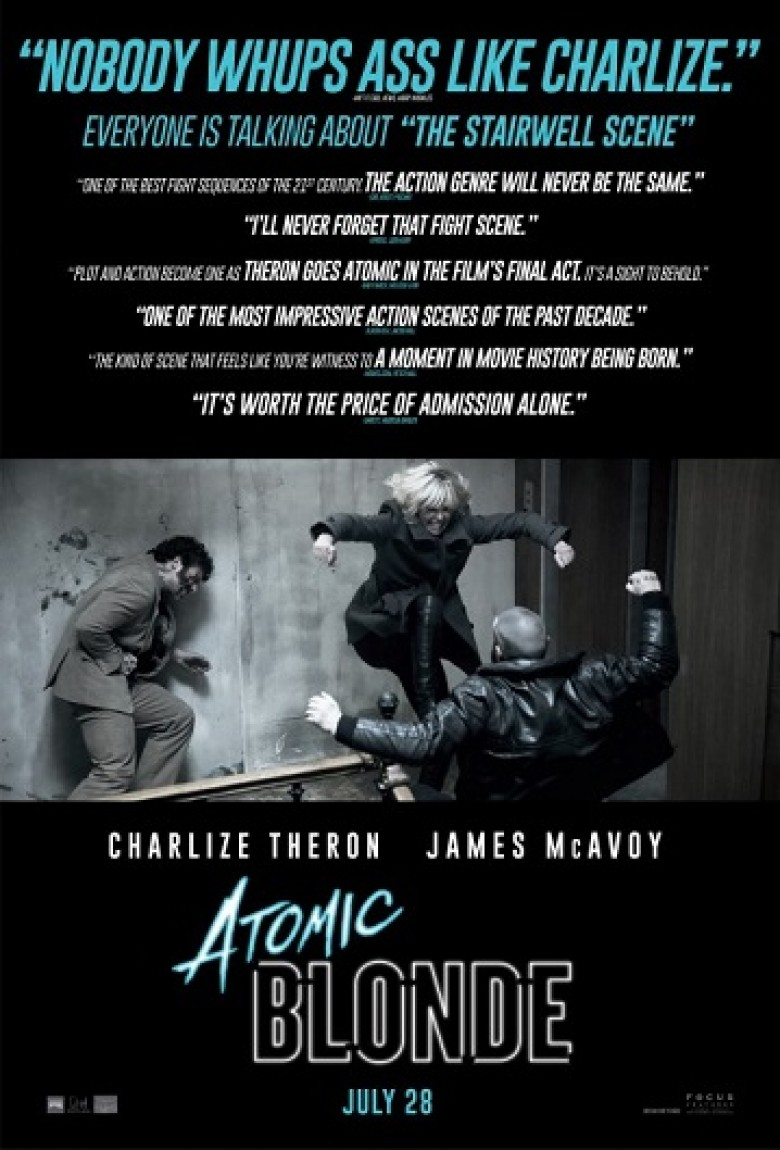 It’s hard to believe that I was thinking the stylish, punishing action of John Wickwas being dismantled upon as its stuntmen-turned-directors Chad Stahelski and David Leitch deciding to go solo two years ago. Stahelski would helm John Wick 2, the result proving a worthy follow-up both in aesthetic and mythology (with more coming). Rather than join him, Leitch shuffled over to Kurt Johnstad‘s adaptation of Antony Johnston and Sam Hart‘s graphic novel “The Coldest City”—a project he and Stahelski were supposed to migrate towards after getting Wick back in action. Fast-forward to summer 2017 and the latter finally arrives as the retitled Atomic Blonde. And with it I understand how splitting Stahelski and Leitch up was a godsend because we now receive twice as much entertainment.

Whatever you do, don’t call this John Wick with a woman. If you’re to compare Charlize Theron‘s Lorraine Broughton to anyone, her tale of spycraft at the Berlin Wall circa 1989—just as it’s about to fall—aligns with James Bond and his franchise’s espionage, wealth, and sexuality. Replace shaken martinis with vodka on the rocks, strip away high concept gadgetry so Broughton can prove her mettle with ingenuity and fists, and leave allegiances on shaky ground with talk of “trust no one” in order to keep her on her toes (and us on ours). From there the template is kept more or less the same with MI6 (namely Toby Jones‘ Eric Gray and James Faulkner‘s ‘C’) shipping their top agent across the North Sea into enemy territory.

The mission: help Berlin-embed David Percival (James McAvoy) retrieve a list containing names and aliases of Allied spies, a catalog given by a Stasi turncoat (Eddie Marsan‘s Spyglass) to Agent James Gasciogne (Sam Hargrave) shortly before the latter is murdered by one of Comrade Aleksander Bremovych’s (Roland Møller) men. While that’s the main goal, Broughton is also tasked with discovering the identity of a double agent nicknamed Satchel. With so many operatives soon in play (Percival, Sofia Boutella‘s French-embed Delphine Lasalle, Bill Skarsgård‘s off-the-books contact Merkel, and John Goodman‘s CIA agent Emmett Kurzfeld), the possibilities are endless. Fortunately (a relative term) for her, every step closer towards the “list” means her odds of staying alive decrease. Learn her adversaries’ game and their puppet master won’t be far behind.

Leitch uses flashback as his narrative device with the main thrust of the film coming via the recollections of Broughton upon her debriefing with MI6 after the fact. This means that we know she survives—bruises and pain not withstanding. The question is therefore whether any of the others did and what role she played if they didn’t. Because of this format we’re kept in the dark about many things so that our minds can jump to conclusions. We become paranoid about everyone and everything as the action expands much further than the trailer’s false notion of revenge provides. Yes Broughton had a relationship with the deceased Gasciogne, but whether it was love or not really has little bearing on the proceedings. If anything this suggestive past distracts.

You can chalk it up to lazy writing—for being so distraught about his death at the start (and therefore chronologically at the story’s end), Broughton shows no signs of caring otherwise—or as just one of many diverting paths of cliché with no true purpose beyond intentional convolution. The film is full of mysterious relationships to ratchet up tension and keep us in the dark towards what’s actually going on. We honestly know nothing about Merkel, Kurzfeld, or the enigma that is “the Watchmaker” (Til Schweiger)—only that they have the means to assist our hero until the time comes that they don’t. Elaborate subterfuge is everything, the puzzle box of plot attempting to be more complex than it is so we never truly divest our interest.

Is it problematic as a result? Yes. It’s frustrating when an avenue is forgotten shortly after it’s opened. But this is only until you realize frustration is the goal. The film doesn’t hide its logical truth via red herrings, it merely forces us to second guess that truth because of them. As each dead-end adds up, we start counting them as levels within reverse (or reverse, reverse) psychology experiments until acknowledging that it’s easier to simply sit back and watch what happens. The filmmakers know the watching is what’s important despite their puzzle remaining as a hook. They know that while gorgeous and exciting, John Wick is ultimately hollow. I’m not saying Atomic Blonde isn’t just as shallow, only that it works much harder to pretend it’s not.

In this regard the action works towards answers rather than closure. Broughton isn’t fighting to kill her lovers’ killers; she fights because it’s her job. Leitch is able to have more fun as a result with listening devices, clandestine operations, and a fluid sense of trust for everyone involved. Who is spying on whom? The answer is everyone spies on everyone. Many of the scrapes Broughton engages in are the result of an “ally” either because he or she wants to know what she’s made of, wants to have her killed, or simply finds it enjoyable to keep secrets and therefore the upper hand. And while she cannot be fully confident in her new acquaintances, we can’t fully trust her either. Or Gray. Or ‘C’.

Every epic fight scene is therefore devoid of meaning except as a stepping-stone to the next. She fights Axis agents because they’re bad and want to kill her, not because they have any actual worth. So it’s literally a matter of survival—every punch, kick, and wound is felt. Personal feelings aren’t involved because everyone has a job to do and some are simply better at it than others. So the sex is for pleasure or advantage, not love. Killing is by necessity, not revenge. Broughton is a stone-cold operative setting out to find the “list” and dispatch a traitor, no more and no less. She is James Bond with the skills to brandish her body as a weapon by any means necessary. She’s pragmatic, ruthless, and impressive.

Theron is fierce in the role, her handle on the choreography and physicality as good as a stunt-person. She has the looks and charisma to excel within the high style of Leitch’s kinetic aesthetic and the period-specific wardrobe and music (the soundtrack is killer with remixes of classic new wave hits seemingly playing in-movie rather than solely for our benefit). Each war against at minimum five heavily armed men cracks us over the head with their brutality and use of site-specific surroundings. None is better than the faux long-take (its “hidden” cuts artfully positioned) moving from stairwell to apartment to outdoor car chase as human endurance is tested to the brink of passing out from exhaustion. Every hit slows Broughton and her enemies down for an unparalleled authenticity.

McAvoy adds some malicious duplicity to the mix as an unhinged agent too long undercover without oversight while Boutella brings vulnerability as a first-year operative to contrast the otherwise cold manipulations as rule. Møller and Skarsgård are both as serious as they are charmingly funny, color to an otherwise stark world built on fear and power (besides Marsan’s blatant comic relief as the one character who cannot handle himself at all). Everyone therefore has a very specific purpose in as far as the plot and tone are concerned. Leitch seeks to cultivate a mood enhanced by palette, music, and punishing action unbeholden to fast cuts. He uses every tool at his disposal (actors included) to conjure a spectacle with just enough substance to succeed beyond its stellar surface.