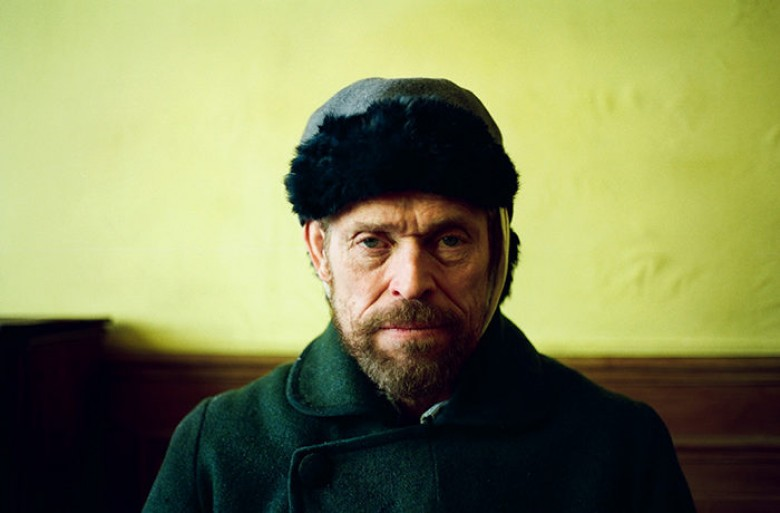 “I am my paintings”

Vincent Van Gogh is quite the enigmatic figure in the art world as a man whose genius was ahead of its time. His greatest works were painted in the final two years of his life while combatting multiple psychotic breaks and asylum stays. People called his art ugly and dismissed his style as crude, but now he’s revered as a Post-Impressionist who helped expand the possibilities of modern painting in the decades since. He infamously cut off his ear, wrote long letters, and ultimately committed suicide (or was murdered if biographers Steven Naifeh and Gregory White Smith are to be believed). While “Starry Night” amongst others has become world-renowned, his legacy in historical pop culture will forever be depicted as that of a “tortured artist” destitute and alone.

Like last year’s gorgeously oil-painted, Oscar-nominated Loving Vincent looked to add to the mystique surrounding his death via fictionalized flights of possibility, painter-turned-filmmaker Julian Schnabel seeks to immortalize Van Gogh with a story meant to shine a light upon what the legend left behind. He and co-writers Jean-Claude Carrière and Louise Kugelberg put fact, myth, and the artwork itself together to create a timeline that hopes to draw truth from the unknown. They’ve pushed actions and events to the background and instead focus on Van Gogh’s emotional and psychological state via aesthetics. They interweave notions we’ve come to believe in hindsight to augment all that his name conjures. At Eternity’s Gate is therefore a glimpse at the madness and originality of a figure that transcends mortality’s human constraints.

And in those terms it’s a commendable feat. Benoît Delhomme‘s cinematography is shaky throughout with an eerie blur covering half the screen to represent our eyes becoming Van Gogh’s those times it regains stillness—bleary, untrustworthy, and full of color. We experience his struggles and tantrums cutting to black like deeds done in a fugue state outside the realm of his own distorting memory. His depression consumes the whole, his neediness pushing those who care about him to the fringes of his very existence. Schnabel provides us a pariah constantly belittled, ignored, or forgotten while Willem Dafoe‘s performance breathes out an empathetic soul far-removed from the heinous acts others say he committed. We see remorse and fear, his anxieties transforming his brightness of vision into absolute darkness.

Schnabel therefore makes good on his goal to “describe a work of art by making a work of art.” He set out to document what it is to be an artist like Van Gogh rather than Van Gogh himself. The question then becomes whether his art does the other justice. Perhaps it does, but only marginally so. For an artist known for his yellow room and expressions of painting light rather than object, the electricity of motion and excitement of fiery energy leaping off the canvas is absent onscreen. At times the production feels amateurish in execution with broad performances and monotone line readings projecting content rather than context. The way we move forward is sterile and matter-of-fact, each new sequence a checkpoint rather than evidence of insight.

We go to Arles and the Saint-Paul-de-Mausole asylum and Auvers-sur-Oise to see Van Gogh’s devolving state rather than to understand it. And moments like a priest (Mads Mikkelsen) incredulously asking why he would believe God gave him the gift to paint when his painting was so bad come across as manipulative and hokey. We’re to understand this juxtaposed against critic Albert Aurier’s (Alan Aubert) glowing review of the work housed by Vincent’s brother Theo (Rupert Friend) caused Van Gogh to stop caring about what others think and yet it simply feels like an unnecessary kick while he was down. Aurier’s compliments are enough to provide fuel for a depressive state of insecurity. We don’t need the priest metaphorically representing a past Van Gogh’s work would soon prove wrong.

That’s the film’s weakness: too often using what we know now to infer upon what happened then. The script is deliberately rendered to give us a wink, its plot steeped in today’s interpretations rather than yesterday’s blindness. I get that this is probably intentional since Schnabel and the studio’s publicists have really gone out of their way to explain how At Eternity’s Gate isn’t a “forensic biography,” but I see it a disservice to the finished product. This mode of interpretation forces us to never quite be able to stand in the 1880s and also finds a way to add a filter of artifice to Dafoe’s otherwise wonderful portrayal (once you move beyond the fact a sixty-year old is playing a man who died aged thirty-seven).

We never see him as embodying Van Gogh, though, because he’s actually embodying Schnabel’s vision of what we believe Van Gogh is as an archetype alongside a sympathetic portrait of who he might have been regardless of whether the uneducated rabble surrounding him in Arles might refute it (this descriptor of those citizens delivered rather flippantly by Oscar Isaac‘s Paul Gauguin). This is very much an artist lovingly commemorating an artist he holds dear—exposing the painter’s essence as immortalized by his art rather than languish in factual evidence that could never do him justice. In that regard this is quite possibly more a film about Schnabel himself than Van Gogh. But while intriguing nonetheless, such a fact leaves it a pretty surface failing to pretend something’s inside.