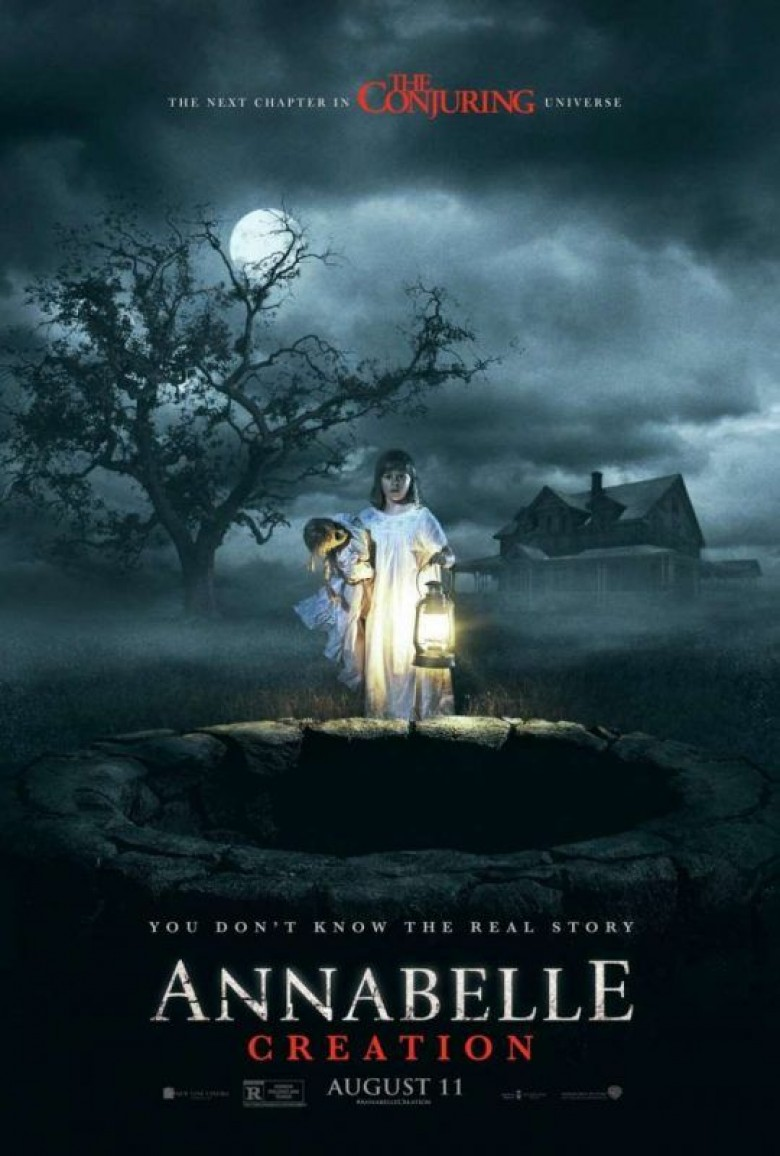 You can’t blame audiences for being skeptical about a prequel to a prequel to James Wan‘s acclaimed The Conjuring when the first prequel proved to be a huge step down in quality. There was no way Annabelle would equal the level of classic contemporary horror that Wan’s look into the paranormal via Ed and Lorraine Warren possessed, but the hope was that it would come close. Not only did it create a whole new mythology around the titular doll that flittered with rendering moot everything we had learned in The Conjuring‘s prologue, it forced the object of terror into being little more than a prop to ignore rather than fear. Writer Gary Dauberman seems to have lost his way, providing a demonic tale that was best whenever the doll was absent.

The idea of expanding upon this misstep with an origin to its origin seemed impossible after watching because everything from the malicious presence to the doll’s name was already explained. Was Dauberman going to go meta and introduce a thematic strain about how scary stories change through time? Perhaps he’d continue going back decade after decade with a new tale about how this wood-carved toy became a murderess curio currently locked away and prayed over to keep its evil spirits at bay. I welcomed that challenge because it would add a level of artistic intent his first go-round lacked. It still might not contain the period-set nuance of slow-burn storytelling that Wan created out of the files of an oft-debunked demonologist and clairvoyant, but it would be unique.

It turns out that’s not at all what Dauberman does with Annabelle: Creation. He instead gives the doll an even darker beginning, one that would seem wholly separate if not for a rather crafty way he connects everything in the end. (I guarantee its predecessor will work much better for you if you see it after this prequel rather than before.) The first thought I had after watching Annabelle was to wonder if Dauberman had updated an unrelated script to contain the doll—something studios ask for when they believe their franchise fits an existing work without reinventing the wheel. Well, the biggest compliment I can give him is to say his latest effort lives and dies by its namesake vessel. He’s taken the best parts of Annabelle and made them integral to “her” mythology.

Between that necessary contextualization of a bona fide demon using the doll as doorway to seek the souls of unsuspecting innocents, and director David F. Sandberg‘s ability to hew closer to Wan’s quieter psychological terror for a consistency of tone that John R. Leonetti‘s blunter B-movie sensibilities lacked, Annabelle: Creation puts this franchise back on track as a flagship of twentieth century horror. I could do without the desire to render coincidence through Easter eggs into ham-fisted manipulation (not all nuns know each other), but the whole is otherwise without blemish insofar as the scares are concerned. Sandberg mastered the use of light—its illumination and absence thereof—with his debut Lights Out and somehow takes that success even further here. Every shadowy corner holds the potential for absolute destruction.

The plot is set a little over a decade before the events of Annabelle, but before we arrive we must go further to happier times for dollmaker Samuel Mullins (Anthony LaPaglia), his wife Esther (Miranda Otto), and their daughter Bee (Samara Lee). We’re only there briefly, though, enough to watch them play a game of hide and seek augmented by handwritten notes, attend church services, and eventually endure their little girl’s tragic death. Fast-forward twelve years and we’re in the mid-1950s watching as Sister Charlotte (Stephanie Sigman) escorts six young orphans to the now life-less Mullins home. Samuel no longer uses his workshop and Esther is bedridden. Their hope is that opening their house to these girls in need will bring back those better days.

But whatever evil lay dormant activates upon their arrival. It senses their curiosity and anxiety, preying upon both to find a way out. The older girls (Philippa Coulthard and Grace Fulton) are frightened by manifestations of ghosts that they themselves create (What if Mrs. Mullins is a monster?), but the youngest (Lulu Wilson‘s Linda and Talitha Bateman‘s crippled Janice) are targeted with physical contact stemming from the creepy doll hidden in a closet in Bee’s old room. The door is locked to preserve everything as it had been before her death, but the spirit calls to Janice and beckons her to release it from its prison. And while initial contact is that of a little girl seeking connection, the truth of what’s really behind her projection is soon revealed.

I liked the built-in figure of God (Sister Charlotte as guardian with the soon-to-be victims rather than an outsider who must be called in to investigate). I liked the inherent creepiness of Samuel’s hardened stoicism and Esther’s Phantom of the Opera mask. There ends up being more than meets the eye as far as the doll and its presence in the house, but Dauberman refuses to simply play with that truth before allowing the tension to amplify. He does both simultaneously, slowly revealing the Mullins’ roles in the terror through his escalation of unexplained acts. And Sandberg introduces the demon looming large almost from the beginning so as not to frustrate us with innocuous parlor tricks and waste time. His vision is more vicious than Leonetti’s, his monster more aggressive.

This makes The Conjuring live up to the R-rating with more than just blood and gore. It adds a bite most Hollywood genre fare lacks. What makes The Conjuring so good is that it makes us fear for every character, be it the Warrens risking their lives, or the haunted family losing theirs. We feel the stakes on both fronts: two disparate trajectories joined together in an integral way. Annabelle: Creation doesn’t quite have that duality to it, but it adds complexity beyond the original’s husband and wife trying to have a baby nonetheless. There’s the torment of parents who lost their child and the trauma of children growing up unwanted. Both are haunted by the same entity in different ways. Both are striving to find that which might someday make them whole.

So there’s no grace period when the thing that latched onto this doll gets to know its prey. It wants their souls and pulls no punches trying to steal them. And even though Sandberg shows its true form early, he never lets it escape the shadows to conjure laughs instead of dread. It pursues these girls with relish, inflicting harm whenever it’s provided the opportunity. Some scares come privately (Janice willfully entering Bee’s room) and others publicly (the demon taking Janice to the barn in plain sight). A level of dream is introduced as screams go unheard, yet everything we see is actually happening. With no protection to be had, all they can do is run and hope to sever this otherworldly bond before fate orchestrates its bloody reunion.