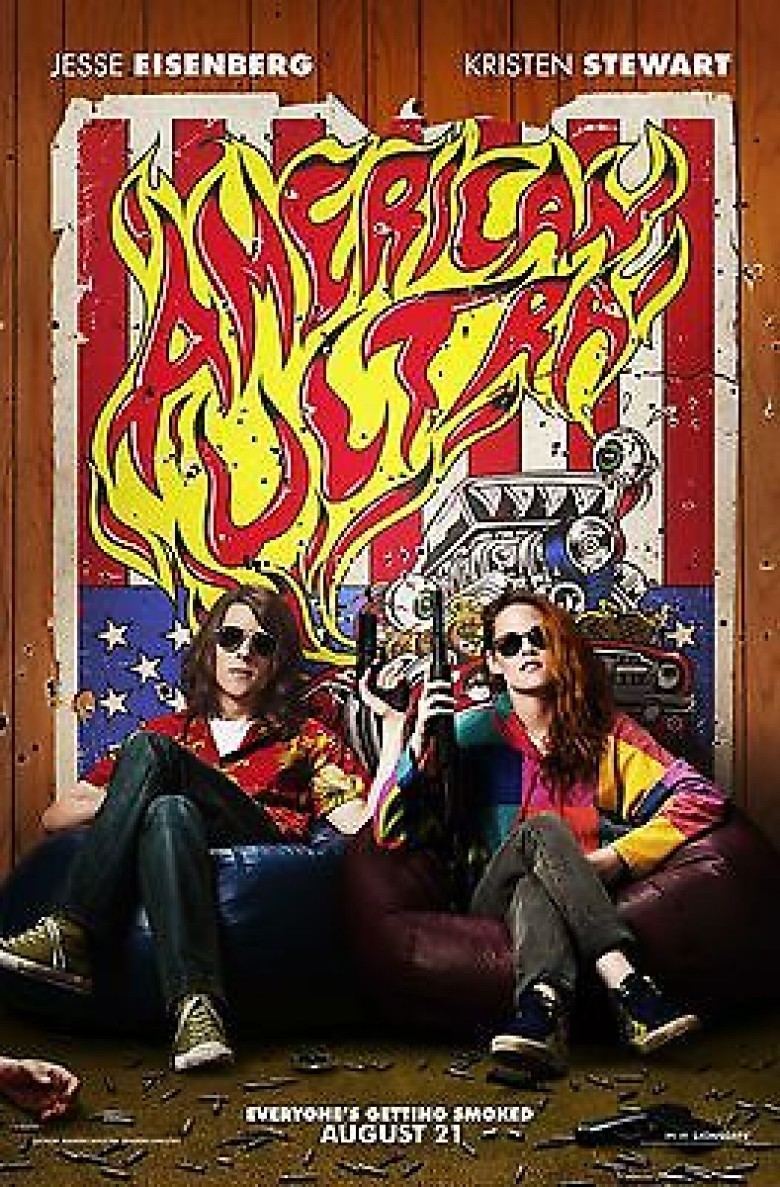 “We fired the ugly one”

When there are only seven basic plots—as the saying goes—to implicitly choose from as a screenwriter, genre-bending homage becomes the sole path towards creativity. So while Max Landis‘ script for American Ultra is The Bourne Identitymeets Mr. and Mrs. Smith through a Pineapple Express filter, it’s a damn good ride regardless. He’s throwing common tropes on their head by making a government-trained agent into a paranoid stoner filled to the brim with anxiety. He’s creating laughs out of dramatic convention while director Nima Nourizadeh infuses visual eccentricity into the action. After all, the film is pretty much a spy parody retaining its own sense of authenticity above cartoonish embellishment. And like most divisive, love it/hate it work floundering at the box office these days, this thing will most certainly hit its stride on home video.

That’s not to say it’s a perfect film, however. The way in which it switches between the marijuana-laced relationship of Mike Howell (Jesse Eisenberg) and Phoebe Larson (Kristen Stewart) and the sterile hallways of CIA headquarters with Victoria Lasseter (Connie Britton) going head-to-head against young, upstart director Adrian Yates (Topher Grace) is awkward at the beginning. This could be because I honestly knew nothing about the movie going in, but that first jump to Langley was completely out of the blue. What’s even more jarring, though, is the sound design’s desire to silence all ambient noise and remove the score most times Eisenberg and Stewart talk. The aural vacuum created is creepy and discomforting: surely utilized to render dramatic moments serious despite any jokes, but artificial enough to also take us out of the moment.

I learned to accept these shortcomings and am glad I did because the entertainment level never falters as a result of them. The casting being spot-on and able to counteract any technical stumbles also helps. I don’t just mean the leads either—yes, Eisenberg and Stewart are at the top of their games even if playing caricatured versions of the public image thrust upon them (minus the drugs). Grace’s fast-talking smarm and holier-than-thou attitude as an egomaniacal program head unleashing an army of clinically insane turned covertly trained operatives is straight-man absurdity at its finest. Britton’s hard-nosed morality as the orchestrator of Howell’s secretive transformation into a highly skilled badass (a program moth-balled with him being psychologically brainwashed and left in a hole-in-the-wall town) provides a textbook foil. He wants Howell dead, she to protect him at all costs.

Beyond this quartet lies Tony Hale, John Leguizamo, Bill Pullman, and Walton Goggins all doing what they do best. Hale’s Petey is a sheepish CIA analyst with less backbone than loyalty; Leguizamo’s Rose a boisterous drug dealer who’s hilariously paranoid and extremely kind-hearted when it comes to showing force; Pullman a hardened, laconic man in the shadows; and Goggins the aptly named Laughter, the gem of Yates’ rogue’s gallery of lunatics. Each adds a welcome sense of color to bring over-the-top chaos to the rather straightforward plot Landis’ main four travel. While the later are drawn along a conventional path of good versus evil with the additional inclusion of truth bombs that risk tearing Mike and Phoebe apart as well as a pissing contest about to get Yates and Lasseter killed, the others refuse to be restrained.

This is crucial too because the upheaval of Howell’s life does get melodramatic. Landis and Nourizadeh need levity to break up the depressing reality of our government willfully planning to assassinate an asset they failed on the off chance he might be activated. You wouldn’t think it initially since Eisenberg is obviously riddled with panic attacks, forgetfulness, and an utter lack of the drive necessary to become more than an inconsequential convenience store clerk devoid of the confidence necessary to even write down his ideas concerning a comic strip he passionately creates in a ratty notebook that will never go anywhere else. But once the revelation faucet begins pouring to expose the sacrifices undertaken and the stakes at hand—pertaining to the love of two potheads or not—you will get emotionally caught up in the ride.

Some things may be too explicitly expressed such as Goggins’ overly hokey trajectory, but they aren’t out-of-place in the context of the whole. American Ultra is tonally subversive and full of stereotypes in order to not do exactly what the audience expects. This is a double-edged sword today because theatergoers do anticipate “twists,” but that’s less a knock on the filmmakers than the industry itself. Because despite throwing the usual action beats our way, you cannot deny the appeal of seeing each implode or only work by sheer accident. Watching Stewart’s Phoebe take it upon herself to climb into the suspended ceiling of Rose’s basement while Mike freaks out below only to inevitably fall through it is funny in itself. Projecting it through a black light filter makes it aesthetically unique for one more detour from expectation.

Ultimately the film’s a metaphorically arduous adventure of emotional and psychological struggle had by a man finding the nerve to propose to his girlfriend. The perfect moments are ruined by his unavoidable mental hang-ups and the bad moments take on the guise of life and death. Eisenberg has built his career on this type of role, but seeing it co-exist with the skills to take down two armed assailants with nothing more than a spoon is refreshing. I love that despite being able to do these unbelievable things, he never gets used to them or embraces them. The whole situation is foreign to his brain and he wonderfully expresses it verbally with dumbstruck awe and fear. Paid off with a rousing supermarket fight of kinetic choreography, any adrenaline rush of invincibility is no match for his drug-fueled paranoia.