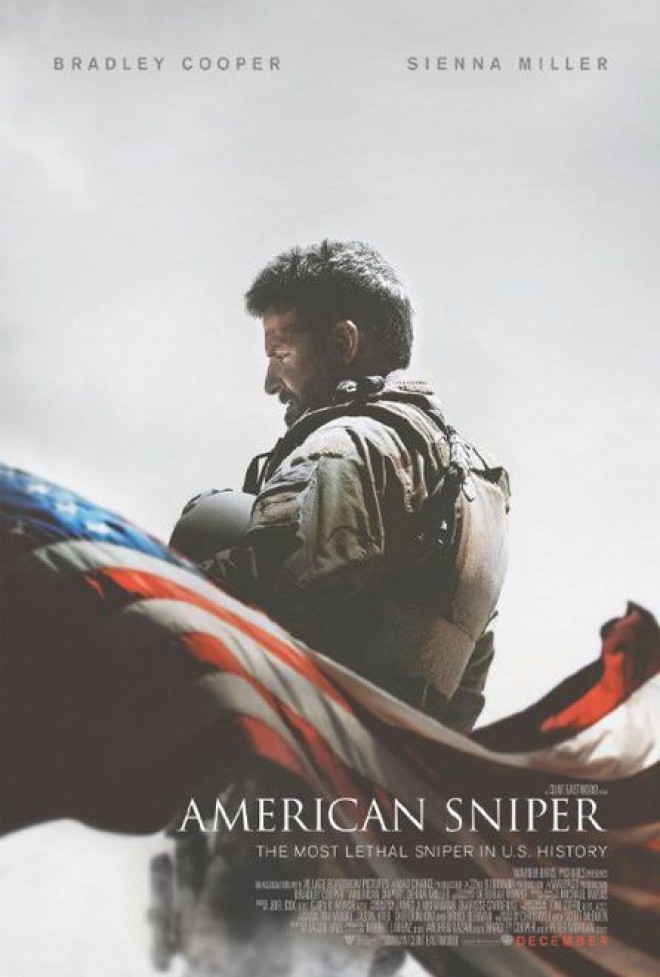 It doesn’t matter if you’re Chris Kyle or any one of the countless war veterans readjusting to civilian life stateside, half the country will call you a hero and the other a killer. While the reality lies somewhere in between, it’s almost impossible to find a war film focused on a single soldier or specific group of soldiers that doesn’t skew towards jingoistic territory or lynch mob mentality respectively. It’s therefore a welcome sight to see Clint Eastwood‘s American Sniper—based on Kyle’s memoir American Sniper: The Autobiography of the Most Lethal Sniper in U.S. Military History co-written with Scott McEwen and Jim DeFelice—strives to do exactly that. His version of the former Navy SEAL works very hard to depict him as a patriot first and foremost. A conflicted, haunted soul who’d do anything for his country.

Scripted by Jason Hall, our entry point into Kyle’s prolific four tours earning him the moniker “Legend” is his first kill. Chris (Bradley Cooper) is set up on a rooftop overlooking the blown-up city streets a sweep team of Marines is traversing when out comes a woman in a burqa and a young boy. Suspiciously approaching the Americans below with hands holding onto some unseen object, Kyle immediately radios for orders. Things escalate before receiving an answer as the woman hands the boy what looks like a grenade. Unable to have anyone on the ground corroborate what he sees, the voice of his commanding officer tells him it’s his call to shoot. Killing them means he’ll either save his brothers’ lives or end up court martialed for trying if his victims end up unarmed.

As the shot rings out we’re transported to Kyle’s first hunt in the forest of Texas alongside his dad. It proves a defining moment that will ultimately shape him into the “sheep herder” he becomes—neither victim nor predator, he accepts his father’s challenge to be a protector willing to let his aggression out to save those who can’t. An effective piece of history for the man we’ll return to in the desert, it provides a basis for his relationship with brother Jeff (Keir O’Donnell), those he served alongside, and America as a whole. To him being healthy means being able to help. Enlisting after a rash of embassy bombings, he survives boot camp. Watching the World Trade Center fall, however, pushes him towards acquiring the distinct confidence, skill, and leadership that will make him into the best.

No matter how much attention earned in the Middle East from allies and enemies alike, Kyle isn’t a machine. He’s a husband and father traveling overseas to protect his family’s freedom. While they’re initially priority number one, though, seeing a comrade die changes him. In that moment—and probably before—those soldiers by his side become family too. If one is hurt, he’ll go to Hell and back seeking revenge. If he’s on leave witnessing the birth of his son and daughter, loved ones just as important as them are being shot at without him watching from above with finger on trigger. So, even though he accepts the approximate 160 lives he’s taken, he’s not impervious to the struggle of PTSD. Every second spent at home becomes a second he’s not saving lives by risking his own.

And this is what makes American Sniper so compelling, expressing this complexity beyond the media’s easy labels. Eastwood forces us to see Kyle wrestle with himself when he kills—the quiet torture of guilt and coldness built to move past it. We see his adrenaline pumping at home when his mind warps a playful dog into a threat that must be contained; his inability to reconcile Iraq and Texas together when a Marine he saved walks up to him at a store to say thank you; and his emotional drive forward to do right by his brothers. He’ll leave his perch to knock down doors, run into the line of fire without pause in perfect synchronicity with his unit, and afterwards feign comfort with wife Taya (Sienna Miller) despite wanting nothing more than to go back to war.

So why then do the filmmakers feel the need to bog things down in an unnecessary cat and mouse chase with a competitor sniper on terrorist side? I’ve read it was actually Steven Spielberg to blame for this aspect because he felt Kyle’s story needed a dramatic conflict besides the silent one ravaging inside his head. Sorry Steven, it didn’t. Because of that desire, though, American Sniper‘s best moments become overwhelmed by clichéd adversarial nonsense minimizing his patriotism into a quest for retribution. I could be wrong and Syrian rifleman Mustafa (Sammy Sheik) might somehow be the one-man wreaking crew killing Chris’ team and seeking the bounty on his head, but it’s too neat regardless. He is simply a bad guy created to give terrorism a face when the real war onscreen is occurring internally.

Cooper’s performance is too good to be forced into this chase. The fact he returns to take out Abu Musab al-Zarqawi’s right-hand man “The Butcher” (Mido Hamada) is enough incentive. Needing to return to save five men and make up for the one he lost is enough too. How he deals with the collision of his two disparate worlds is what captivates; his tearful fear of reuniting with the family he left and his self-sacrificing self-centeredness to risk killing those he hopes to save abroad. The war scenes are brutal and authentic—especially when compared to the oft-publicized fake baby—but I wonder if focusing more on Kyle in America would have been better. His journey to normalization in retirement is glossed over too quickly and his tragic demise too soft a footnote after watching his chaotic life beforehand.