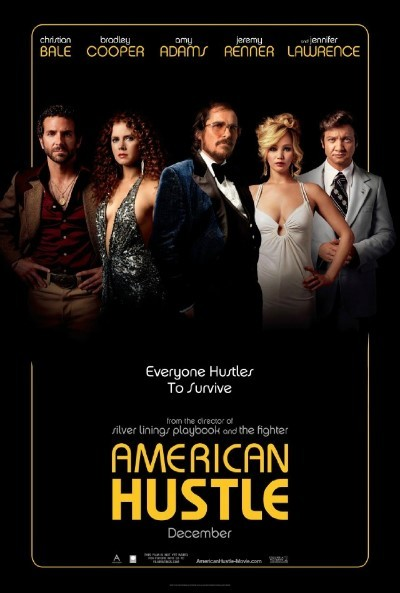 Director David O. Russell has said I Heart Huckabees was a transitional film for him wherein he took a break, took stock, and came back with the drive and enthusiasm for making movies that got him into the business in the first place. And even though the film is my favorite of his—an underrated gem of an existential comedy—I see his point and am grateful he found this second wind because he’s been rewarded with much-deserved critical acclaim, financial backing, and a level of artistry/storytelling vaulting him into the industry’s top-tier. American Hustle continues this hot streak with a sprawling character piece full of moving parts that depicts a “some of this actually happened” historical fiction with a healthy portion of comedy and entertainment to make its two and a half hour runtime fly.

Unsurprisingly begun as a 2010 Black List script by Eric Singer, Russell’s first move after attaching himself to the project was to embellish the real-life ABSCAM players into caricatures that provide the welcome breath of fresh air humor can give an otherwise straightforward crime thriller. And when you’re dealing with a guy like Irving Rosenfeld (Christian Bale) whose con man life is convoluted enough for him to be a grifter, dry cleaner entrepreneur, husband, adoptive father, and adulterer eventually squeezed by the FBI into helping orchestrate an elaborate operation meant to lock corrupt politicians and money men behind bars, a bit of levity goes a long way towards relieving any overdone contrivances inherent to his reality. The whole thing reads like a comedy of errors on paper and Russell fearlessly lets it be exactly that.

Opening on Irving’s overweight gut and insane comb-over, we meet him and his partner/lover/ex Sydney Prosser (Amy Adams) prior to them and FBI agent Richie DiMaso (Bradley Cooper) meeting the mark they’re planning to ride all the way up the chain of command to the US Senate. It’s a brilliant introduction to the chaos at play, setting up the romantic tension between these three unlikely co-workers and the bickering disparity of each one’s professional opinion towards how big they should be going before traveling back in time to voiceovered flashbacks explaining exactly how they arrived in a luxury suite opposite Camden Mayor Carmine Polito (Jeremy Renner). It’s a bumpy ride unfolding in a carefully timed release of information that makes us infer one thing about each new character before subverting it with the hilariously crazier truth.

This is how we can constantly find ourselves laughing in surprise when Irving leaves Sydney’s bed after a whirlwind thirty-minute montaged courtship to arrive at his New Jersey home with mentally unstable wife Rosalyn (Jennifer Lawrence) and son Danny as well as at supposed tough guy Richie sitting at a table with mini curlers in his hair inside a domestic situation you honestly cannot see coming. It all plays into the title of the film, exposing every single character as the hustler doing what he/she can to survive by cultivating a persona stronger and more confident than the one before it in order to achieve lofty dreams and leave the suffering of past failures behind. Irving and Sydney lie, cheat, and steal as an occupation, but the rest prove just as cutthroat whether intentionally or not.

What ensues is a riotous adventure with shifting allegiances and tumultuous temperaments risking killing them all by the end. DiMaso runs an undercover operation on Irving and Sydney that lands the latter in jail for fraud unless they agree to help take out four high profile marks with the department. A snowball effect of greed and power escalates the stakes as they move from low-life Carl Elway (Shea Whigham)—a middleman with the potential to clean the slate by introducing four guys ripe for the picking until Richie over-zealously squeezes him for larger and larger fish—to Polito, Congress, and eventually casino kingpin/enforcer Victor Tellegio (an uncredited surprise cameo). DiMaso’s ego spirals out of control, Irving begins to drown under the increasing pressure, and Sydney wades through playing both sides until her lifeline to safety can be secured.

But while the plot’s ins and outs intrigue and entertain, American Hustle‘s true appeal lies with the colorfully complex characters Russell’s drawn for his unofficial troupe’s flawless performances. In a perfect world all five principals would be up for Oscar glory because each brings a level of intensity and infectious humor worthy of praise. Lawrence is an easy standout playing someone so emotionally volatile, switching between manic and depressive on a dime to constantly be in the right and forever the victim. Cooper is the most blue-collar and smarmy charlatan of them all without a clue as to where the line for personal salvation lies once the allure of sex, drugs, and professional notoriety take over his life. And Renner’s charismatic politician with a heart of gold provides both whipping boy and morality rallying point by the end.

Yet it’s our lead duo of Bale and Adams who truly shine, somehow managing to command our full attention despite the myriad supporting players all vying to take the spotlight away. If Irving and Sydney were played by anyone less, there’s no question that the abovementioned three and a slew of periphery roles from Louis C.K. (who starts weak but finds his stride by the end) to Elisabeth Röhmwould take control. But from the first frame on we literally cannot take our eyes off them, so much so that cinematographer Linus Sandgren‘s camera is constantly zooming in and panning up to not be mesmerized by Bale’s gut or Adams’ barely covered chest—two aspects lingered upon throughout this glitzy period piece of vintage hair, clothes, music, and attitude.

Please don’t let the aesthetic distract you from the performances, though, because they’re what captivate through their wealth of humanity in spite of the monsters they are. Within the twists and turns, back-stabbings and double-crossings, there’s somehow also an underlying sense of moral code that eats at Irving and Sydney until they can no longer keep their hardened façades intact. And as things speed out of control we watch them pause and wrestle with selfish desire and a yearning to be free, calculating an escape that may not be possible once Richie descends deeper into the abyss of fame until their mortality hangs in the balance under a canvas bag at gun point. We implausibly see them as antiheroes worth saving, finding honor in their complexity and sympathy despite the hundreds and thousands of dreams they’ve helped destroy.