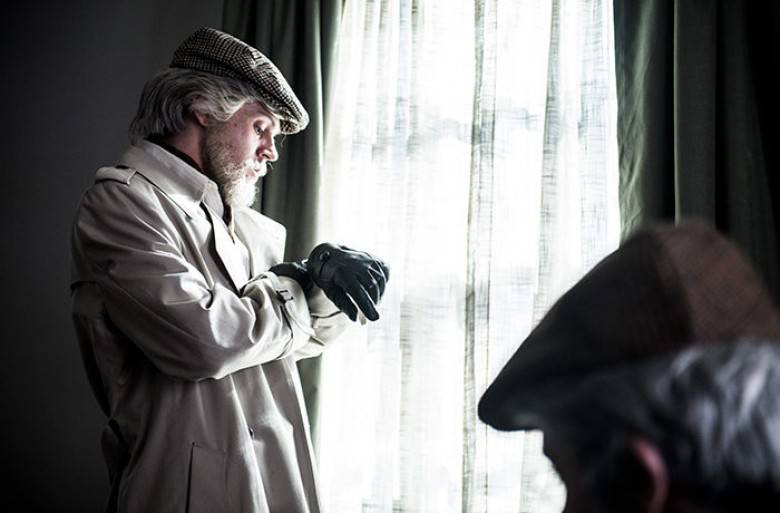 The more you hear about privileged white kids shooting-up schools because they’re under such “debilitating” pressure alienating them from the “cool” kids, turning “alt-right” with a projection of hatred that stems from a hatred of themselves courtesy of the false notion that they’re somehow “special,” acting out of boredom in an attempt to cry for help...the more you have to look at the over-arching issues: community, upbringing, parenting. Too often we hear “He was such a good boy,” from family, friends, and pillars of institutions to which he belonged. We hear about his “potential” from smiling adults more proud in how they’ve provided opportunity than cognizant of whether he has craved or embraced it. We delude ourselves into seeing what we want to see.

Art tries to invest meaning onto heinous acts by infusing whatever psychological impulse the artist believes is the driving force behind them. For better or worse, objectivity is impossible in this form. The subjective viewpoint being exploited will turn off half the population for political, religious, or philosophical reasons. Even documentaries fall into this trap because the filmmaker pulls together his/her information in a way that fits a specific narrative. To show facts is to negate intent and vice versa. To get below the surface into an emotional arena is to gloss over the process itself and how it dictates action regardless of desire. The only way therefore to portray the truth is to acknowledge that “truth” in this context is fluid. Motivations change and memory is imperfect.

This is where Bart Layton‘s spectacular hybrid American Animals comes in. A documentarian known for The Imposter, Layton stumbled across the wild tale of four college-aged kids in Kentucky who planned and executed a heist of rare books located in the special collections section of a local university library. He wanted to know more about what happened, but the subjects were all serving their lengthy sentences in federal prison (it’s not a spoiler to say they were caught).  Correspondence was ignited and Layton eventually found himself with enough information—each participant provided conflicting and corroborating details—to craft a script that coincided with their release. He then had the means to both interview them and fictionalize their story, so he decided to do both. At once.

The result epitomizes the change in Layton’s early interstitial from “This is based on a true story” to “This is a true story.” We aren’t watching Layton’s interpretation of what happened as much as the faulty remembrances of those who experienced it. Spencer Reinhard, Warren Lipka, Eric Borsuk, and Chas Allen are literally telling their respective versions of the ordeal removed from each other so as not to be influenced while Barry Keoghan, Evan Peters, Jared Abrahamson, and Blake Jenner respectively act out their words in dramatizations that only prove as honest as the storytellers are willing to allow. Some events don’t happen to them all and some only to one. We therefore have to take each narrator’s word for it, just like they did back in 2003.

It’s an invigorating process that takes us into the affluent households of these boys and the sense of safety they were desperate to escape. No one is dying. No one is being threatened by his bookie. No one is in dire straits, in need of the millions they stand to collect by stealing John J. Audubon’s work and selling it to a European fence. This whole enterprise hinges merely on the idea that it could happen. It’s about rich kids who’ve wanted for nothing their entire lives finding themselves caught in the excitement of planning a robbery just like the countless movies they’ve watched and loved throughout adolescence. It’s about the rush of adrenaline an abstract adventure delivers and the devastating consequences of what it ultimately becomes in reality.

And our investment isn’t beholden to the performances (although it would be satisfied by them alone). When things get tough, Layton cuts to the actors’ real-life counterparts to see the wide-eyed thrill of the chase and the solemn, unforgiving guilt and regret of the act. We watch Keoghan question what he’s doing—inwardly frantic, going as far as seeking an obstacle to derail Warren’s full-steam-ahead locomotive—and then listen to Spencer recall that trepidation before confirming his ability to push through and cement his complicity. Spencer and Warren’s accounts of what happened during a New York City meet-up with their fence’s (Udo Kier) middleman come with minor discrepancies that Layton visually toggles between in his reenactment. It’s a funny juxtaposition and a crucial example of the complexity of perspective.

He talks to the boys’ (now thirty-something adults) parents to hear those aforementioned, almost-coached platitudes that they can thankfully still hold onto since this isn’t a school shooting with multiple deaths and hundreds of injuries. But that doesn’t take them off the hook. That doesn’t discount the comfortable backdrops their homes provide or the back-patting they give themselves to explain how their sons strayed off-course rather than fell prey to unrealistic expectations. That’s not to say we shouldn’t put blame squarely on the quartet’s shoulders—the will they/won’t they concerning the necessity of neutralizing a librarian (Ann Dowd) is the true line they contemplate crossing, not the theft—just that we shouldn’t pardon those external influences and continue allowing them to push other youths into a corner elsewhere.

So there’s a lot going on. American Animals is as much a lift-the-curtain glimpse at the psychology of intelligent, seemingly moral young men who shouldn’t want to do what they do on paper as an entertaining (the comedy is ample) thrill ride to vicariously experience the danger of creating needless drama simply because they were lucky enough to avoid the type so many of us face without a choice. And it all works. Layton has cut between life and fiction with a deft hand, each interjection of commentary critical to understanding mindsets and motivations. These aren’t hardened criminals after all. They’re scared kids who’ve never faced conflict and therefore don’t know how good they have it. That’s not an excuse—it’s a symptom. It’s evidence that everyone is capable of horror.

Peters is a delight as the group’s ringleader while Keoghan adds another impeccable performance to a quickly growing résumé. The former masks his character’s melancholy with an exuberantly animated façade as the latter embraces his wealth of nuance to say more with expressions and demeanor than with words. Abrahamson and Jenner are equal to the task too, their internal emotional wrestling exploding outwardly when the gravity of their situation can no longer simply be ignored or diminished. They each breathe life into the past self of men now cursed with hindsight and blessed with a second-chance. Finding freedom in being marked as an ex-con and therefore unencumbered by the expectations of privilege is still very much privilege, but it’s also a lesson to those craving that same gratuitous chaos.