Review: Alice Through The Looking Glass [2016] 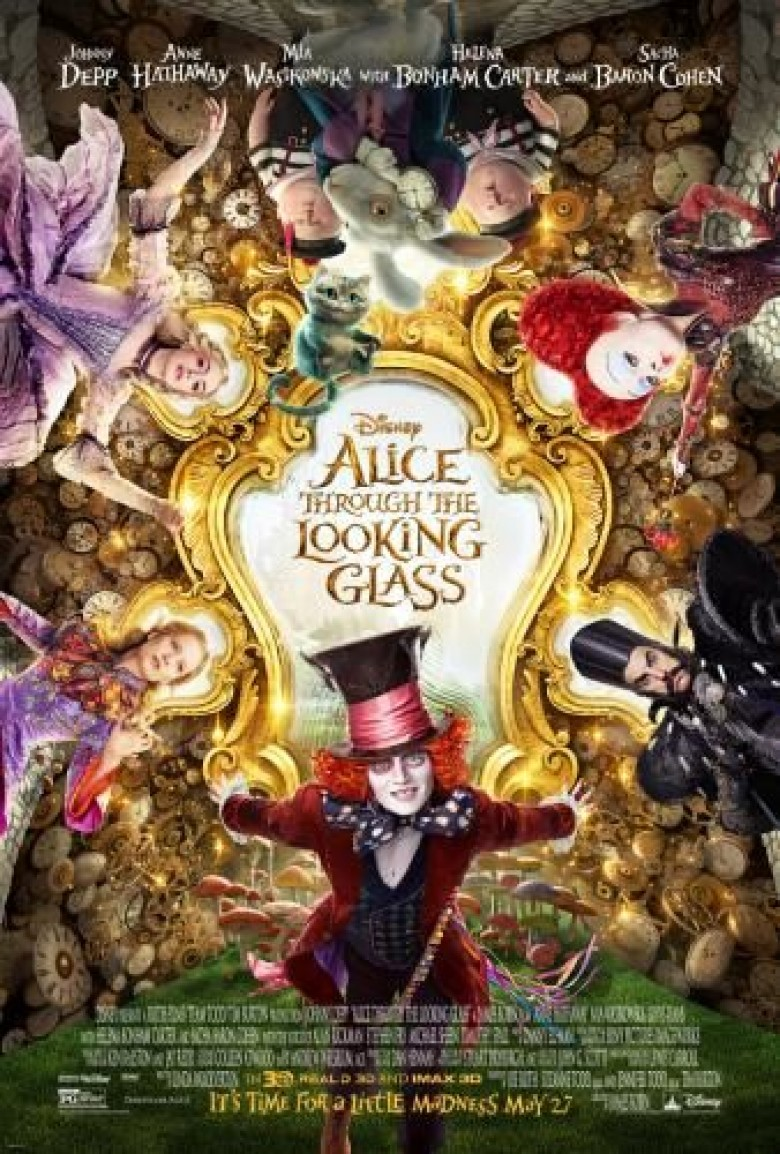 “Everyone parts with everything eventually, my dear”

Now that the whole “should we reboot or create a sequel or just go ahead and do both at once” debacle is over thanks to Tim Burton‘s misguided Alice in Wonderland, maybe Disney’s desire to create an imaginative and surprisingly dark franchise of the absurd could find creative merit to match its insane billion dollar gross. This is because the filmmakers (Linda Woolverton returns as screenwriter with James Bobin taking over the director’s chair) have acquired the latitude to think outside the box and expand the universe rather than simply augment its lazy regurgitations. In this way Alice Through the Looking Glass is guaranteed a better fate simply by having the confidence to stand or fail on its own. Lewis Carroll is purely inspiration now and that’s okay.

The question then becomes whether they’ve succeed in crafting an enjoyable film while living up to the literary saga’s unique aesthetic. If the audience at my screening is any indication the answer is yes on both counts. It’s a case of Hollywood supplying that which we crave and a billion dollars and loud guffaws seem to indicate this fits the bill. Personally I’d disagree. That doesn’t mean I didn’t laugh too, however, since this entry is much more attuned to Carroll’s poetically witty wordplay than its predecessor despite it arriving on behalf of what I believe to be a wholly original character (Sacha Baron Cohen‘s Time). But while the tone matches what I remember from reading Carroll’s original two Alice tales years ago, the plot sadly does not.

Instead the story Woolverton fashions is utterly familiar in today’s sci-fi fantasy culture with a trajectory hinging on time travel and a mission centering on a child’s longing to once more see the parent who never accepted him/her and died before finding the opportunity to reconcile. Despite Alice’s name being in the title and she being our heroine, the underlying theme of her choosing between a life of 19th century safety like her mother or progressive adventure like her dead father (or somewhere in between similar to where she ends up after weighing the options of wife or spinster in the last movie) is rendered the least important thread of all. The filmmakers would rather concoct elaborate backstories for figments of Alice’s imagination than delve into her psyche.

Just like John August manufactured a troubled childhood with a taskmaster father for Johnny Depp‘s Willy Wonka in Charlie and the Chocolate Factory, Woolverton draws one up for Depp’s Mad Hatter now known as Tarrant Hightopp. The Hatter—despite being insane and loveable because of it—is apparently presently insane in a bad way after discovering an object from his past. This object’s existence makes him question whether or not his father Zanik (Rhys Ifans) and family perished at the Jabberwocky’s flames like he always believed. Somehow this thought renders a madman mad enough to lose his comedic edge and begin withering away. Only Alice (Mia Wasikowska), just returned with memories of Underland intact, can save him by stealing Time’s chronosphere and stopping the Hightopps clan’s demise.

But that’s not all. Since Alice is turning the clock back in a world where she doesn’t exist, another character is needed to play with time travel’s butterfly effect. This role falls to Iracebeth (Helena Bonham Carter) who’s been fitted with her own tragic exposition at the hands of sister Mirana (Anne Hathaway)—yes, all Carroll monikers have been removed for names that aren’t nearly as magical as the filmmakers hope—when the two were little girls. It’s a plot thread we’re meant to care about and yet it proves so insignificant beyond a device for absolute destruction that Alice isn’t even present at its obvious conclusion. The dream world has officially been removed from its dreamer. Disney renders Alice an afterthought in her own franchise.

This reality is made more problematic when Alice has to go back through the looking glass—a portal between her world and Underland—to escape Time’s pursuit because she inexplicably wakes up in a sanitarium overseen by Andrew Scott‘s Dr. Bennett. So she has been dreaming after all? I don’t know. Am I reading into a family film too deeply? Perhaps, but these questions don’t come up when reading Carroll’s books so they’re an issue with the scripts and therefore relevant to highlight. Through the Looking Glass is also so completely focused on Hatter and the Red Queen that the other characters are mere blips along the way. Mirana could have asked Alice to help Hatter on her own and nothing crucial that occurs would change.

Thankfully Time is cool enough to make watching the film marginally worthwhile. He’s the butt of jokes and endearingly imbecilic as only Cohen can be, but his juxtaposition as both a person and an abstract construct is intelligently formed. I loved a scene with he, Hatter, Hare, and Doormouse (despite its faux smart retro-fitting to explain why tea time never came for the batty trio) because it’s quick-witted and enjoyably fun. This is what you want in an Alice film and yet this is maybe the only instance we’ve received it during the course of what’s now been four hours in the theater. Cohen understands the material where Depp simply comes across as high on an LSD trip. Sure that’s funny to some, but it misses the point.

At least Depp’s accent troubles make sense (his wispy lisp in happiness and Scottish brogue in anger), adding insight to his character rather than a glaring performance fault. Wasikowska is better too because she’s able to possess her unwavering confidence from the start now that she’s a successful ship captain and doer of impossible things. I like that Carter’s Red Queen is allowed psychological and emotional depth beyond villainy, but the way it arrives is too ham-fisted to truly excel. And as with the first it’s the computer graphics that ultimately steal the show. They’re gaudy and sometimes overpowering, but they deliver the correct hallucinatory effect. It’s just unfortunate the whole feels like it’s seguing into a Wonderland TV series without Alice more than supplying a self-contained film.