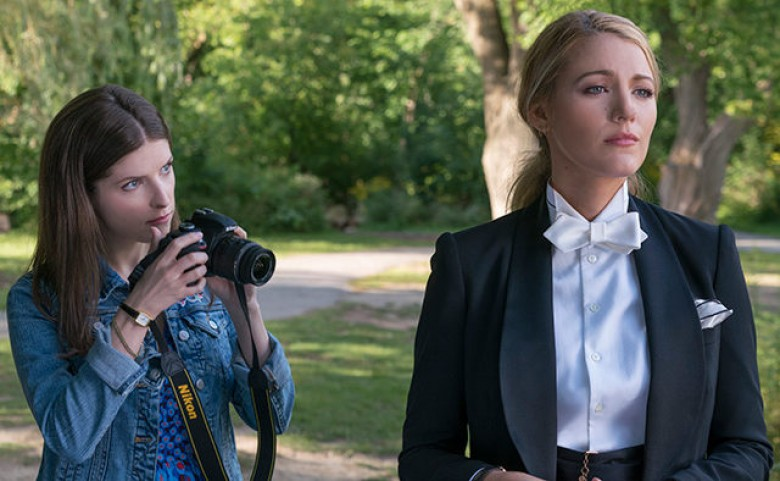 Anna Kendrick as “Stephanie” and Blake Lively as “Emily” in A SIMPLE FAVOR. Photo by Peter Iovino.
- Share this page -

You don’t wonder which woman has secrets after meeting Stephanie Smothers (Anna Kendrick) and Emily Nelson (Blake Lively). Instead you wonder which has more. They’re built to be hiding something in their past whether dark or not. The former: a goody two-shoes, little Miss Perfect type who always has the energy to show up every parent at her kid’s school despite a tragic accident that took the life of her husband and brother. The latter: a hard-drinking enigma who refuses to let people take her photo with a heart attack-inducing severity that definitely helped make her the success she’s become. Stephanie seeks love and inclusion. Emily yearns for an escape from mounting bills and complacency. They’re the exact opposite of each other and yet identical just the same.

So of course they become best friends after just a couple weeks. It’s a credit to the bond formed by their sons (Joshua Satine‘s Miles and Ian Ho‘s Nicky) and the convenience of possessing what the other needs to fill the hole in their souls. You could laugh at Stephanie like the other snarky parents for believing someone like Emily would ever see her as an equal, but we witness their interactions and know their connection is real. And why wouldn’t it be when she’s willing to help shoulder so much of the parenting responsibility that Emily’s hectic career won’t afford? Their time together might consist solely of martinis and cathartic sessions of conversation to get what ails them off their chests, but that’s more than enough.

This is the set-up to Paul Feig‘s latest A Simple Favor, one that disarms us with wit and a carefully cultivated façade constructed in order for it to be torn down. Adapted by Jessica Sharzer from Darcey Bell‘s debut novel, I can’t help wondering how much of that humor was added during the translation since the source material is very specially described as a thriller in the vein of Gone Girl rather than the pitch-black comedy the film proves. A lot of it is based in the characterizations themselves with Kendrick and Lively leaning hard into their respective prudish Girl Scout and uncouth ball-buster demeanors. It’s the perfect contrast for an authentic rapport where Stephanie gasps in scandalized embarrassment as Emily mockingly coos at such impossibly cute preciousness.

No one should be surprised then that it’s the coolly nonplussed Emily who suddenly disappears without warning while Stephanie the worrier is left to pick up the pieces and mount a nationwide search party (via her Moms Vlog) to discover what happened. Maybe she’s still putting out the latest “fire” caused by her incorrigible boss Dennis Nylon (Rupert Friend). Or maybe she’s simply dropped off the map like her husband (Henry Golding‘s Sean) predicts because she knew her son was in good hands with her new BFF. No one wants to think the worst—at least not yet. But as Stephanie utilizes her unknown super sleuthing skills powered by the sheer inability to ever stand still or rest, death becomes the most prevalent theory by all involved.

While the novel intentionally distracts by using unreliable narrators (it’s told from Stephanie, Emily, and Sean’s separate points of view), that’s not the case here. There are a couple instances where a character tells a lie as the truth unfolds onscreen, but that’s a stylistic choice rather than a tool to disorient. The film decides to throw this format out the window, designating Stephanie as our reliable narrator since she’s the most honest and trustworthy figure in this ever-sprawling mystery. So she catches us (her vlog audience) up with the details surrounding Emily’s disappearance, her heartfelt pleas and nostalgic reminiscing leading towards the inevitable discovery of a body. From there everything progresses in real-time so each subsequent revelation is as new to us as it is to Stephanie.

The rabbit hole we fall down is one containing dark secrets as clichéd and outlandish as you would imagine from such a pulpy piece of genre writing. Rather than take it all seriously like so many overwrought thrillers of its ilk, however, Feig and Sharzer inject the bleakly nightmarish skeletons with the sort of amusingly playful fun that lets us get in on the joke. If this tone isn’t calibrated to perfection we end up laughing at the film instead of with it, so credit all involved for keeping this balancing act above water. Whether it’s Bashir Salahuddin‘s Detective Summerville having the time of his life watching the soapy relationship drama unfolding before his eyes or Friend’s satirical Tom Ford shtick, every actor is on the same page.

Even little Ian Ho earns some belly laughs with Nicky’s attitude proving as tempestuously cruel as his mother Emily’s. He pretty much picks up right where she left off as far as making Dad’s blood boil and Stephanie’s seeming innocence blush with shocked silence. Kendrick embodies that over-achieving sense of purity without letting it rule her much more powerful wealth of insecurities and lack of self-esteem. She lets us simultaneously laugh at and pity Stephanie whenever she’s being railroaded by someone with more confidence and less humility—a truth that only makes the moments when she takes control even better. I’m not sure the transition is as naturally earned as it could be, but her growing backbone is crucial to where the plot is rapidly moving.

The real standout, however, is Lively. This is a character she was born to play as it mixes the two sorts of roles she’s generally offered for maximum impact: those utilizing the allure of her glamorous beauty and those letting her unleash a biting, take-no-prisoners temperament a la The Town or Savages. She effortlessly moves from smiling curiosity to fearsome anger depending on what those around her are doing and whether she appreciates it. You can imagine very easily that Emily’s the type of person to stage an elaborate hoax because she has the intelligence and ruthlessness to get away with it. And while Stephanie’s evolution does feel forced, Emily’s penchant for cruelty is almost enough incentive to believe it. Eventually sociopathy runs amok so anything becomes possible.

It’s a helluva ride with more laughs than anticipated (the tongue-in-cheek 80s-esque epilogue text is a brilliant touch) and a self-awareness that’s necessary to buy into the circus. Every new wrinkle arrives with a feeling of dread quickly disarmed by well-placed jokes until we fall into a rhythm that allows us to be at ease in enjoyment rather than too tense or too bored by exhausting shenanigans doing more to distract than enhance. Things will get convoluted, but it’s okay because the excess only provides extra amusement. The crazier things get the funnier the characters become in their attempts to traverse the chaos in high heels with a smile permanently etched upon their faces. Neither trashy nor over-bearing, A Simple Favor hits that sweet spot of pure satisfaction.