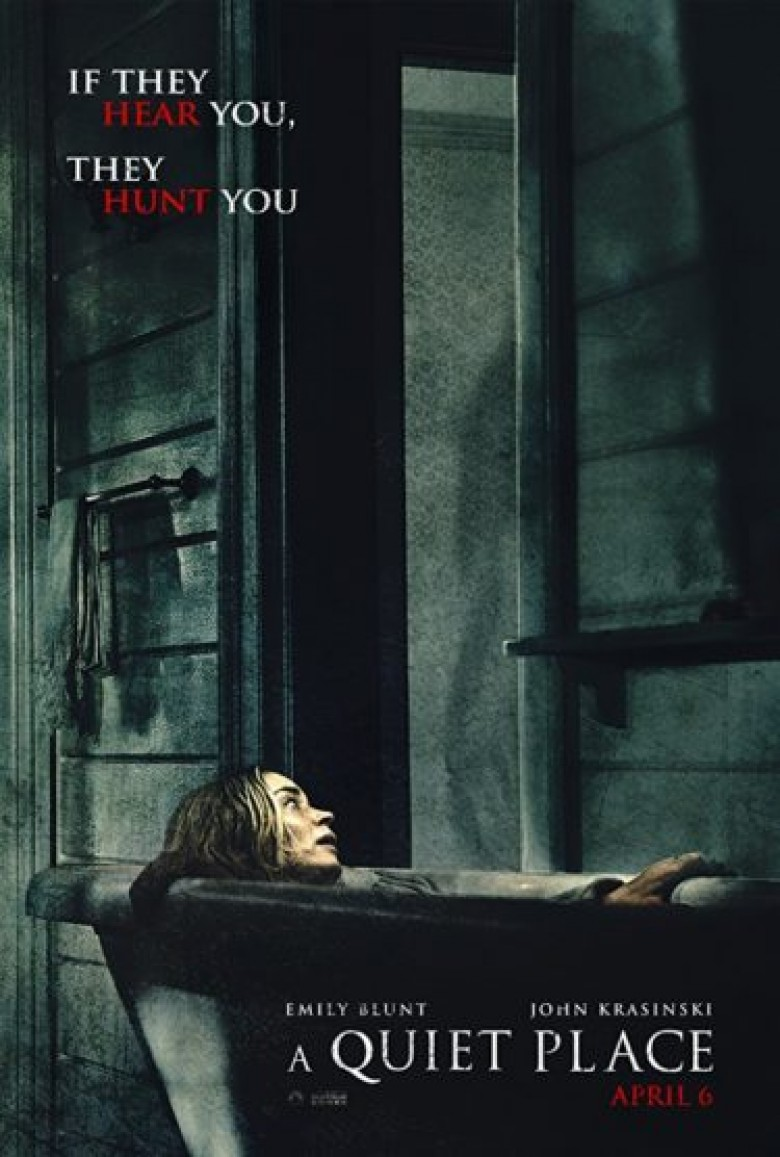 “I have always loved you”

It’s always a risk going to a film on opening night—especially a horror film. The genre attracts a younger audience looking to giggle their way through the experience, often proving so obnoxiously overcompensating in their fear preparation during the preshow trailers and commercials that I wish that I had stayed home. So it was with trepidation that I went to see the first Thursday showing of John Krasinski‘s critically acclaimed A Quiet Place, hoping it’d be sparsely attended with most waiting for Friday night. Instead I found a packed theater full of cellphones, loud talking, and dispiriting conversations including a “Why don’t they move?” in reply to some stranger’s synopsis of what was to come. I cringed knowing some restless soul would eventually react inappropriately with laughter. I was wrong.

Credit the filmmakers for delivering a work that turns the usual horror ratio of exposition to climax on its head. Most spend two-thirds of the runtime explaining or showing what catalyzed their high-concept scenarios. We watch loved ones torn apart by unexplained monsters and then see them learn to adapt to a new world order where silence equals survival against a horde of blind creatures that attack through aural targeting. There’ll be a close call, a tragic death, and finally a fight taut with suspense for no reason other than our having waited an hour to see it. But screenwriters Bryan Woods and Scott Beck buck convention. They strip things down to a human level. They tell a global story through the eyes of a single family.

And if they took their love of silent movies to heart when writing the script, Krasinski follows suit with an effective rewrite and expert direction that ensures that every visual detail teaches something about our surroundings rather than simply create them. We don’t need an explanation for what the Abbott family is always walking on—only a single instance of Lee (Krasinski) pouring sand out and a selective few close-ups of footprints along their path. We don’t need a ham-fisted newsreel catching us up on the fallout of whatever occurred to let these heinous creatures that hunt them loose—only bold newspaper headlines taped to a basement wall. We don’t need to see people to know the Abbotts aren’t alone when lights in the distance confirm humanity lives on.

We’re therefore thrown right into the fire with an interstitial declaring Day 89 (or thereabouts). The Abbotts have lived almost three months with a suffocating uncertainty. Lee and Evelyn (Emily Blunt) have helped their family endure in large part because their daughter Regan (Millicent Simmonds) is deaf. This allowed them and their son Marcus (Noah Jupe) to already know how to communicate without words, an advantage many sadly lacked. Even so, however, safety can never be assured. Whether by accident, absentmindedness, or bad luck, tragedy is constant when living in peril. With it come grief, guilt, and regret. Soon the monsters are easy to ignore behind routine. Only the memories conjured by self-loathing and blame prove insurmountable. It’s in each other that we recognize our impending mortality.

From a brief but crucial prologue we move to Day 472. From a quick glimpse into the family dynamic we move to Day 473 wherein the remainder plays out as an hour-long, edge-of-your-seat cat-and-mouse chase propelled by facial expressions, light, and sound. Krasinski reveals threats early to add to an ever-increasing sense of foreboding before delivering on their promise. He throws in as many intangibles as assumptions until we resign ourselves to the fact that they cannot all escape from this alive. We anticipate, hold our breath, and stare without blinking as fear and suffering is presented via stifled screams and silent sobbing. And to ratchet things up even further Krasinski deprives us of all senses save one, shifting his soundscape to Regan’s vantage point for maximum impact.

The audience becomes trapped within a state of absolute suspense—the only thing that could quiet a theater of co-eds looking to riff on bad line readings or silly premises. You could hear a pin drop throughout the entire duration, every viewer enraptured by the continual threat hiding just off-screen. Couple this atmosphere with a suitably creepy species of monster that resembles a xenomorph with Attack the Block alien teeth and you can’t help but give yourself over to the Abbotts’ plight. But beyond just their physical wellbeing is also a well-conceived sense of psychological strife. These characters are dealing with unspeakable chaos on a macro and micro level, the latter stemming from a personal calamity that’s tearing them apart from the inside.

As such, the acting becomes paramount. Krasinski’s team does a wonderful job creating isolation and desperation through their sets, but it’s all for naught if the cast falls short. It’s often tough to see Krasinski outside of the deadpan sarcasm his iconic role on “The Office” wielded, but he does a good job here with the drama of being a father willing to do whatever is necessary to save those he loves. Jupe reaches an authentic state of near hyperventilation when confronted with the prospect of danger and Simmonds confirms her turn in Wonderstruck wasn’t a fluke as the wiser than her years Regan dealing with age-specific anxieties and rebellion exacerbated by her nightmarish circumstances. And Blunt’s powerfully poignant performance proves the unflappable rock at the center.

Go in blind because A Quiet Place‘s success hinges on our investment in its carefully orchestrated plot progression of emotional wallops. While it works on the level of surviving an onslaught of otherworldly beings, its true merit comes in how that onslaught exposes their humanity—through both heroism and failure. The highest praise I can give is to say the Abbotts feel like a real family. Their motivations are pure, their failings relatable. Things can skew silly towards the end when everything approaches the point of finding closure, but they cannot ruin the effectiveness of those actions in the context of the characters’ trajectories. And with a perfect cut to black Krasinski fearlessly satisfies story and audience with the consistent less is more philosophy presented at the start.