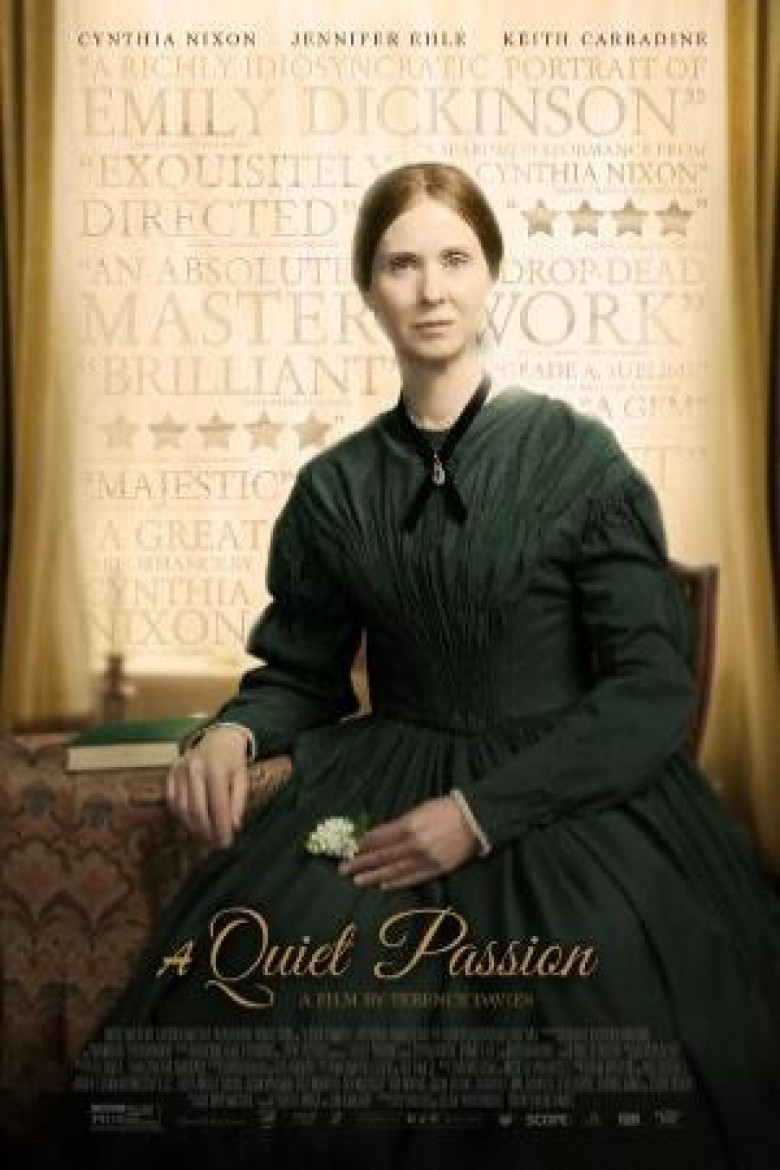 "Give me something pressed from truth”

I think you’d be hard-pressed to find someone who never heard the name Emily Dickinson, although I’m probably not alone insofar as being ignorant to her work. For someone as prolific as the Amherst, Massachusetts-born poet with approximately 1,800 poems to her name, I’m sure I’ve heard at least a few over the years. Like many revered artists ahead of their time, however, only a dozen were published before she died of Bright’s disease at age fifty-five. It would therefore be easy to fashion a film around that incongruity, focusing on work ethic, talent, and the lack of appreciation. But what would we learn that we couldn’t already assume? So Terence Davies instead delivers a portrait of tone, emotion, and personality. He provides the artist above the art.

This may seem small or obvious, but I’d argue it’s far from both. I don’t generally enjoy cinematic biographies because they often deal with generic through-lines depicting surface checkpoints along a journey consisting of way too many years for 120-minutes. A Quiet Passion is by contrast a film of disparate snapshots, chronological vignettes with varying periods of time between each that represent impressions not wholly related to Dickinson’s craft as much as her very existence. We’re made privy to her love and adoration for family, the war between her God-faring spirituality and her disdain for the church, the fire of artistic passion steeped in truth rather than fantastical idealism, and an ever-increasing depression and anxiety augmenting her already destructive self-esteem and all but reclusive lifestyle.

Davies focuses on the idea of Dickinson (Emma Bell during school-aged years) being a “no-hoper” as coined by her teacher at Mount Holyoke Seminary. This poet resigns herself to a life of solitude early on, one devoted to her stern yet compassionate father (Keith Carradine‘s Edward) and reservedly melancholic mother (Joanna Bacon‘s Emily). She has little use for leaving home or enjoyment of the prospect since her education was cut short due to what’s described as bullying—something she gets a bit of anyway thanks to an extremely pious family. Emily (Cynthia Nixon for the majority) needs no one besides sister Vinnie (Jennifer Ehle) and sardonically honest friend Vryling Buffam (Catherine Bailey) to laugh with on the Dickinson estate, true happiness proving a luxury eternally out of grasp.

What follows is a document of mood and despair in the way Emily is perpetually mired in a pessimistic air. Her intellect is ahead of its time as far as civil rights, women’s rights, individuality, and social standing—enough that she’s often dismissed as difficult. But she’s also a product of her era in how a defeatist attitude clouds every argument as though she too is resigned to label her philosophies as contrarian rather than worthy of debate so others may be persuaded to agree. She’s under Edward’s roof and therefore honors his wishes (albeit often after opinions have already ruffled some feathers). And despite her bitterness growing with each passing year, her infectious beauty of mind and empathy renders her a coveted friend to those allowed close.

The journey is therefore as sad as it is humorous, her quick-tongued retorts rendering many recipients speechless and yet also embarrassed enough to leave her to her exile without a second look. We revel in the glorious airs of Emily and Vryling subverting what it means to be a woman through society’s lens, their candid conversations as deliciously biting as those between Lady Susan and Alicia Johnson in last year’s Love & Friendship. She refuses to back down from her convictions, the mostly combative responses towards them pushing her farther into seclusion from an outside world unable to understand both why she won’t act like a “lady” and why they shouldn’t either. Even Vryling acknowledges conformity as a forgone conclusion while Emily merely accepts her status as pariah.

Her solitary existence is by necessity due to actions like her mother’s via emotion. The younger Emily is allowed an outlet through her verse while the elder’s duty as mother has ended, leaving her empty. There are wonderful sentences of dialogue such as “melancholy being mistaken as contentment” and “all compliments are dubious” that elicit a chuckle just as they ingrain themselves in our mind for further thought later. We’re seeing the disintegration of these women onscreen as an imperative: Mrs. Dickinson lost in her depressive state, Emily struggling to reconcile what she needs to be free against what would allow her to live free, and brother Austin’s (Duncan Duff) wife (Jodhi May‘s Susan) following the guidelines of that title at the detriment of personal desires.

Emily is shown as though from a heightened vantage point to watch as 19th century America keeps everyone who’s not a white male in chains. She watches as brilliant female minds are ignored or made dull in appearance so as to exist in the world rather than rebel against it. And with each demoralizing revelation comes a new poem written by candlelight between 3am and 6am in the quiet of her house to be later spoken in voiceover, each thematically relevant to its corresponding vignette. Emily laments how everyone who treats her as an equal or appreciates her words as worthwhile eventually leaves—society dictating their paths away from a morbid, harsh, and demanding woman who eventually won’t leave her room to say hello.

Her honesty and refusal to condone hypocrisy should be commendable and yet they’re her social ruin instead. Luckily this truth manifested into her art—that which has stood the test of time despite those few poems published by Samuel Bowles (charitably) being altered in punctuation and voice. Davies takes liberties with facts to condense events (supposedly Dickinson never met Mabel Loomis Todd, their encounter here a crucial moment in the film), his own poetic license allowing us to understand Emily better by putting her into conflicts rather than keeping her on the outside. This is how her verbal explosions become relevantly incendiary and her guilt in making them all the more tragic. Her defiance lives on the page despite its being drowned by regret in life.

And the whole is magnificent to gaze upon thanks to Davies’ vision and cinematographer Florian Hoffmeister‘s set-ups. Whether the stunning metamorphoses from one actor to another during the transition from teen years to adulthood via sitting portrait, the 360-degree pans of a room saying so much visually without speaking a word, or the changing light from day to night as the camera remains still, A Quiet Passion reveals itself as a mesmerizing work of art itself. The way it allows Nixon to embody this tragic figure in American history with authenticity, inspiration, and deep sympathy against its gorgeous backdrop of art direction becomes an added bonus. As lyrical and purely emotive as Dickinson’s poems read aloud, Davies’ film immortalizes her legend’s complexities rather than simply provide textbook facts.

Advertise With Us
- Featured Event -
Fri May 8th