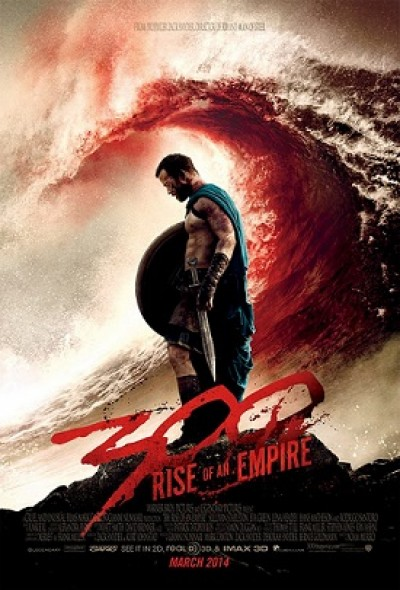 This is what a copy of a copy looks like. It pretends to be equal to the original—and in some aspects proves to be exactly the same—yet arrives seven years after everything its groundbreaking ancestor provided was expanded and evolved upon. I loved 300 and gave it a perfect score despite some issues because it was so fresh and exhilarating. It showed how the capabilities of cinema could be pushed even further than Frank Miller‘s other adaptationSin City, breathing life into a dark and gruesome graphic novel by meticulously transferring each frame to celluloid and allowing it to become a work of art. I think I used the word “gorgeous” in my review to describe the over and under cranking displaying the heroic Spartans as Demigods of honor, valor, and abs. Then Starz’s “Spartacus” ruined everything.

I’ve never seen the show, but who doesn’t assume it pretty much took 300‘s aesthetic, added porn (sex and gore), and became a runaway hit? It reappropriated the genius behind Zack Snyder‘s film—yes, I said genius—into a soapy melodrama that forgot what made King Leonidas’ martyrdom so effective. We let him and his men enter our hearts, watched their love for family and duty rise above impossible odds as they set off towards certain death. There was political unrest back home between Queen Gorgo (Lena Headey) and the villainous Theron while Xerxes (Rodrigo Santoro) strived to corner the Spartans and bleed them dry. It was sacrifice pure and simple: a beautiful eulogy honoring men who died for freedom and democracy, superior in intellect and health. We knew their fate and we cheered despite it.

So what happens when the idea to make Miller’s follow-up story—a comic book only brought to fruition after the film’s success a decade past 300’s publish date? It moves forward without realizing the amount of time needed to create it because dollar signs ruled the day. It forgets about character and heroism by trying to give face to the enemy, thinking it was providing a chess match when it really just distracted us from the men we’re meant to root for. Rather than make us feel for the good guys, Snyder and co-writerKurt Johnstad force us to revile the bad. Everything cool and malicious about Xerxes gets usurped by saying it was all because of his adopted sister-in-arms Artemisia (Eva Green) who in turn uses slithery grins and steely stares to quantify her evil.

300: Rise of an Empire therefore becomes a tedious slog of repetitive callbacks not only to its predecessor but also itself. Whether Heady’s narration circling 360-degrees or Green’s comedy of errors promoting general after general before watching them lose to Athenian leader Themistokles (Sullivan Stapleton) with gratuitous reaction shots of bored disdain, the whole endeavor plays like farce. But wait, they cajole David Wenham into returning and don’t have him orate the story he was spared to tell in the first film. They get Peter Mensah‘s character best remembered as the man getting kicked in 300‘s trailer while Nine Inch Nails blasts through our ears because it’s such an epic bit of fan service, dude. Every move seriously feels like it was made in 2008 with no regard to how fast irrelevancy sets in during the 21st century.

I feel bad for director Noam Murro because the project was set up to fail. Rather than start from a script with heart—an underdog tale of war and fidelity against a monstrous hoard—he inherits one that believed wall-to-wall fighting was all people appreciated about the original. The biggest mistake, however, is setting it concurrently to 300 so constant talk about what the Spartans are doing can remind us there’s a better story just around the corner from the Athenian and Persian navies. Why should we bother with cardboard men jumping on ships with spears and arrows or the Greek warrior girl who betrayed her country for bloodlust when Leonidas is making his last stand? Way to make us perpetually aware that what we’re watching isn’t the most interesting thing happening at any given moment.

There are a couple great scenes and I don’t want to gloss over that fact. An early flashback battle that earned Themistokles his army (sorry Sullivan, you’re no Gerard Butler despite holding your own) recalls 300’s slomo/sped-up runs through flesh and blood but forgets about atmosphere by settling on excessively juicy blood spurts instead. It unfortunately turns into exploitation rather than art, a swords and sandals epic more attuned to high body count than providing a reason for it. Thankfully the climactic fight pitting Stapleton against Green (some time after an overly sexualized encounter that’s more kinky than erotic) proves a formidably daring achievement by seamlessly spinning around our Athenian hero as he cuts through Persian after Persian with zoom-in glances at his enemy a boat away like a video game cut scene brought to life.

I knew Rise of an Empire couldn’t begin to live up to its predecessor but I never thought it would be as hollow as what’s arriving in theaters. There was a distinct chance that its failure would open my eyes to what so many critics hated about 300, but it instead bolstered my opinion about how timely and great it was. Everything about Murro’s attempt to capture lightning in a bottle is striving too hard to be like something we no longer need. Snyder ushered in a new aesthetic for better or for worse—to equal that success you need to go bigger. That doesn’t mean adding breasts, gore, and dismemberment. It definitely doesn’t mean humanizing the inhuman villain Xerxes. 300 was always more than its look and it’s too bad everyone involved here forgot why.