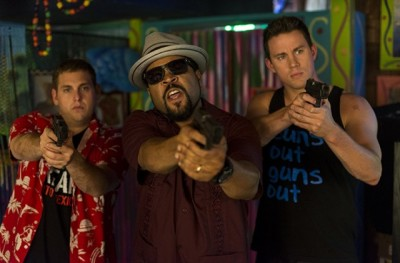 I really wished 22 Jump Street‘s one-note joke would sustain. I really did. I even forgave the first thirty minutes lulling me to sleep with cute references to its increased production budget courtesy of its prequel’s surprise financial success like carbon copy beats built bigger and Korean Jesus getting replaced by his Vietnamese brethren. Sadly, however, I knew it never could. The joke’s funny because it’s self-deprecating and true, but at a certain point you must expand beyond “meta”. Dare I say The Hangover Part II was better at doing similar things because it gave its audience the middle finger by flying to Singapore, shooting the exact same film, and never calling attention to the obvious. This one relies too heavily on winking, something 21 Jump Streetalready excelled at doing itself in relation to its 1980s predecessor.

Don’t get me wrong, I laughed my butt off at numerous times throughout its thin-at-best plot because the actors are hilarious and the gags more memorably over-the-top than the first. Whether credit for the funniest bits should be targeted at Jonah Hill and Michael Bacall‘s original story or the two guys who subsequently rewrote the script independently of one another (Oren Uziel and Rodney Rothman), I couldn’t say—although I’d guess the former. Somewhere along the line, however, the story between the jokes got too inconsequential. We realize we don’t really care about anything that’s happening because absolutely none of it has any bearing on the end game. College is merely a new locale to add crazy characters and provide a new rift between bromancing BFFs Schmidt (Hill) and Jenko (Channing Tatum). The film is an afterthought.

And I get that most people don’t care. Hell, the majority probably would rather have no plot to deal with as long as Hill and Tatum continue yukking it up in their codependent relationship. Not only do I accept that way of thinking, I almost allowed myself to embrace it by going along for the ride multiple times. What stopped me from fully committing, though, was the fact I just rewatched the first film and could remember its ability to toe the line between farce and genuine buddy cop tropes at a level that earned my desire to care about these two numbskulls and their unfathomable evolutions as human beings maturing into adulthood (despite possessing grossly warped examples of romantic love from a teenager and teacher respectively). 22 Jump Street has no such secondary layer.

No, here it’s literally the same thing over again but reversed so Jenko can be Big Man on Campus while Schmidt’s relegated to nerd status—you know, what we thought 21 Jump Street would be before it stunningly turned cliché on its head. Maybe the filmmakers simply ran out of fresh ways to breathe life into the model and thought it might be fun to give us what they subverted two years ago without realizing its success was a direct result of not doing exactly that. Hill’s Schmidt gets clingy because his brother-in-arms finds a new bestie with whom synchronicity is defined and Tatum’s Jenko sees his physical potential to be a badass once the dead weight dragging him down is cut loose and the confidence he had in high school returns in spade. I’m sorry, but that’s boring.

The plot to infiltrate a campus drug ring by befriending the dealers and discovering their suppliers therefore proves just as banal or worse. At certain moments during the middle of the film I actually forgot Schmidt and Jenko were cops because all reference to the drug operation disappears save the are-they-criminals-or-aren’t-they back-and-forth concerning footballers Zook (Wyatt Russell) and Rooster (Jimmy Tatro). This thing could be rewritten in about five minutes so that it’s about two regular college kids stumbling upon the case with no law enforcement background whatsoever and no one would be the wiser. The fact that Hill and Tatum are police officers proves to be a complete MacGuffin while emotionally stunted growth shines as the true point of conflict. Can their friendship endure this new chapter? Do we honestly care?

The answers of course are yes and no. We ultimately want them to stay friends, but how it happens is of no great importance as long as the journey is funny. Here’s where the screenwriters and directors Phil Lord and Christopher Miller excel because there are some monster punchlines. New characters likeAmber Stevens‘ Maya and a scene-stealing Jillian Bell (from “Workaholics” fame) as Mercedes arrive as pawns to the plot before being revealed as keys to the best moments of the film. Who they are is inconsequential when what they provide in terms of laughs—either by them or through reactions from Hill, Tatum, and Ice Cube‘s Captain Dickson—is paramount. As a string of skits 22 Jump Street could possibly be the funniest comedy of the year, but it’s far from a good movie.

Play it on TV with remote in hand and I’ll be doubled over on the floor in stitches after distilling its overlong 112-minute runtime to about 40 minutes of pure unadulterated comedy. I could watch Hill and Tatum riff for longer than that if only the vehicle itself stopped pretending to be more than an excuse to waste money and have fun. Looking back I seriously cannot differentiate Peter Stormare‘s importance from that of the Lucas Brothers even though he’s a villain and they merely periphery players added for brilliant twin humor. They somehow endure while he doesn’t because the film places distraction above story from frame one. If only its self-reflexive nature was as inspired as its unforgettable end credits parody sequence. It tries so desperately to be so and yet ultimately only reeks of said desperation.