Tiki Cocktails: Then and Now 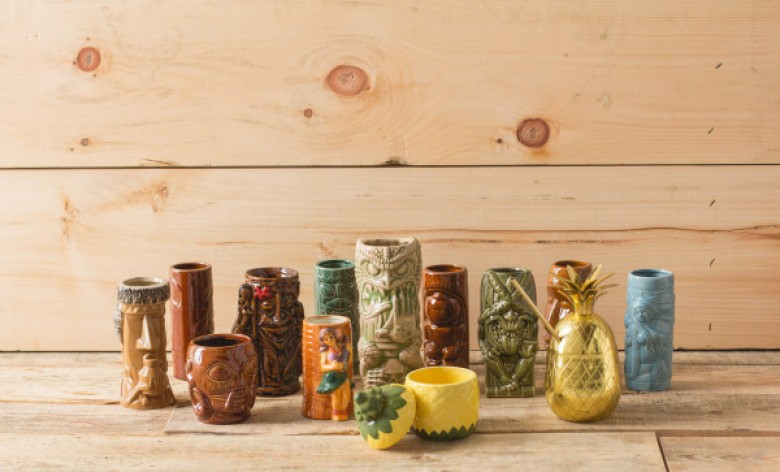 This year, Imbibe named Lost Lake in Chicago, a joint project of cocktail demigods Martin Cate and Paul McGee, “Cocktail Bar of the Year.” According to Imbibe:

The menu has only changed once since the bar’s debut in early 2015, but with the release of the most recent compendium, McGee and his team hit their creative stride. The mix of classics and modern drinks hold to the expected tropical framework, but many of the new recipes tip the scales of the genre, showcasing unexpected ingredients like sherry, whiskey, gin and agave spirits.

What is notable about this year’s choice is Lost Lake’s distinction as a tiki bar. It’s an honor that points to tiki’s reclaimed status as a respectable cocktail and hospitality genre and gives legs to the claim that the revival of tiki we’ve experienced over the past few years isn’t just a flash in the pan.

But where did tiki culture and tiki cocktails come from, and why do Americans seem to share a common familiarity with their trappings?

The movement’s name is derived from the culture of Polynesia, defined as the group of a thousand or so islands scattered about the southern and central Pacific Ocean, including Hawaii, Easter Island, Tahiti, Samoa, and New Zealand. According to belief system of the Maori people of New Zealand, the god-like figure Tiki (with a capital t) was the first human in existence (alternatively, he is described as the creator of man). In time, the term tiki (and iterations of the word tiki, depending on dialect) began to be used by Polynesian people to mean the carved statues they created in the likeness of their gods.

Tiki’s Emergence in the United States

While it’s true tiki as we know it and love it today takes cues from Polynesia, it should be kept in mind that the kitschy jargon, rum concoctions, whimsical mugs, and floral decor of tiki bars are not authentic representations of that culture but instead reflect a hodgepodge of tropical and nautical influences, including Caribbean.

Tiki could be better understood as Americans’ perception of generic island culture. That’s because American tiki was not an organic transplantation of Polynesian culture by indigenous people but the brainchild of Louisiana native Ernest Raymond Beaumont Gantt. In 1934, inspired by his travels in the South Pacific, Gantt opened Don the Beachcomber, a tropical-themed bar and restaurant in Hollywood, California. Replete with flaming torches and rattan furniture, Don the Beachcomber had a look and feel designed to transport patrons to an ambiguous, exotic locale. The food was pseudo-Cantonese, and the drink menu was potent and rum focused.

Gantt may be credited with the tiki cocktail genre, but Trader Vic’s claims to have served the first Mai Tai, perhaps the most famous tiki cocktail, in 1944.

In fact, it was Gantt who first began layering rum with the fruit juices, liqueurs, and flavoring agents that have come to characterize tiki cocktails.  He called his concoctions “rhum rhapsodies,” and many of his original recipes, like the Scorpion and the Zombie, are still being slung by bartenders today. For that, he is credited with launching the tropical drink genre.

Tiki could have started and ended with Don the Beachcomber, but it caught on and took off–slowly at first and then with vigor. Hollywood insiders and celebrities took a liking to the concept and began frequenting Gantt’s place. In 1937, “Trader” Vic Bergeron changed the name of the bar he owned in Oakland from Hinky Dinks to Trader Vic’s and adopted an island theme inspired by Don the Beachcomber and his own travels.

Nearly a decade later, the American craze for all things Polynesian exploded when the men serving in World War II’s Pacific theater returned home with stories and souvenirs from the islands they visited. By the mid to late 1950s, tiki drinks and Indonesian and Chinese inspired food, like crab rangoon and rumaki, appeared on menus and at cocktails parties across the country, and outposts of Don the Beachcomber and Trader Vic’s cropped up in cities far from their original locations.

The Origins of Tiki Motifs

It seems that at least one of the iconic motifs of tikidom took root during the mid-century craze. When Trader Vic’s opened a new location in Beverly Hills in 1955, the owner installed a large tiki statue outside the building. The restaurant also began using images of carved tiki gods on its menus and other printed materials, eventually leading to their innate association with tiki in the minds of Americans.

Trader Vic’s is also credited with popularizing the drink umbrella, though at an earlier date.  The mini, brightly colored parasols were offered to customers as a way of keeping ice in a drink cold on a warm day.

The elaborate tiki mugs that have come back into fashion as of late can also be dated to this period. Even though Don the Beachcomber did serve drinks in hula girl- and human skull-festooned ceramic vessels as early as the 1940s, true tiki mugs–those fashioned in the likeness of carved, tiki statues–probably didn’t hit the scene until the late 1950s. Today, vintage as well as new tiki mugs are considered a collector’s item.

An interior shot of Tonga Room inside the Fairmont San Francisco Hotel.

Tiki-style style lounges were commonplace in the United States in midcentury, and, at the time, there was no sense of kitsch associated with them. In fact, most were upscale establishments, and patrons would dress to the nines for a night out at a tiki bar.

In the 1970s, disco dominated the nightlife scene, surplanting tiki, which continued to decline for years in its wake. Vestiges of the tiki craze hung on for some time, but they were mostly relegated to the category of tacky relic. When Trader Vic’s New York City location inside the Plaza Hotel finally shuttered in 1993 (long after it had lost popularity with the trendy set), it seemed that tiki was officially done for.

That is, until recently. Tiki experienced blips of limited popularity in the 1990s, but it wasn’t until the 2000s that tiki came back in a serious way.  Now, you can find a Mai Tai or a rum punch next to the Manhattan and Negroni on the menu of your favorite cocktail bar, and it’s not uncommon to find local bars hosting tiki-themed nights.

But more surprising is the number of tiki-dedicated establishments that have opened in the United States, Canada, and around the world. And it’s not just major metropolises get in on the action; even midsize cities like Pittsburgh and Cleveland now boast tiki bars.

No wonder, then, that Forbes recently cited tiki as a trend to watch in 2016. We here at KegWorks are betting they’re right.

Want to know more? Stay tuned for future blog posts in our tiki series. Next up: stocking your home tiki bar.