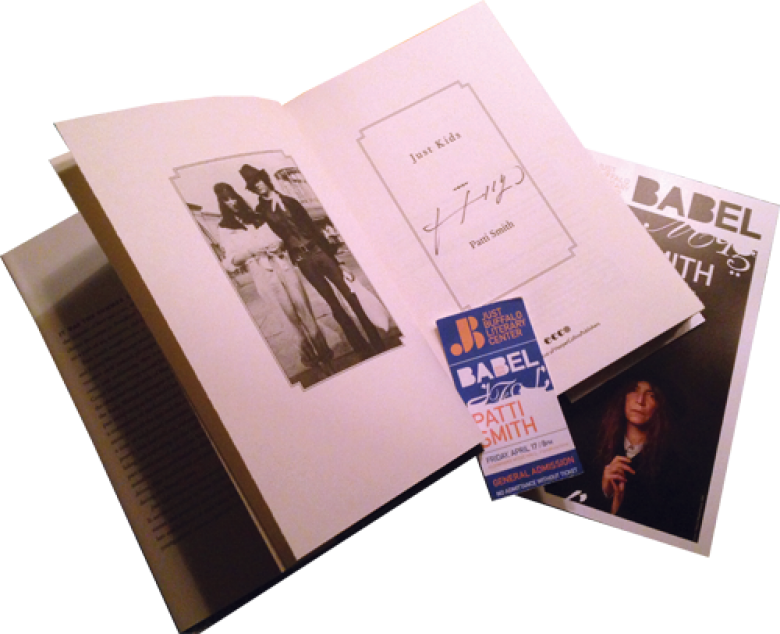 After waxing on about the “Lovecraftian” look of downtown Buffalo—the morning’s fog still hadn’t lifted by 6:45pm during my drive along the 190 to Kleinhans—Patti Smith disarmed the largest crowd in Just Buffalo Literary Center‘s Babel history with the words: “If you get bored or tired just tell me. We can talk about anything.” It’s amazing how honest they felt, especially in context with a lecture season seeming more like a publicity tour than look into the minds of artists. Smith conversely arrived to give us a piece of her and her history straight from the heart. Kind, funny, scatterbrained, and unapologetically real, she read from her memoir Just Kids (mum’s the word on any rumored cinematic prospects), injecting impromptu anecdotes while singing some songs along the way.

With her on guitar was Lenny Kaye, mirroring their first performance forty-plus years ago (a telling stat juxtaposed against Just Buffalo’s own fortieth anniversary) much to Artistic Director Barbara Cole and the fans’ pleasure. She called our architecture “awesome” and in need of preservation unlike the many properties ripped down in her adopted hometown of New York City (by way of Chicago and South Jersey). “I don’t want to see NYC become a strip mall for the prosperous,” she said at the end of the evening, sentiments of her adoration for a time she cherished and immortalized in Just Kids. The book depicts an era of her career shared with the “artist of her life” Robert Mapplethorpe, living in the Chelsea Hotel with few possessions and scarce food. But Patti never felt freer.

A passage speaking about her lettuce soup—of which she shared its recipe with a wry capper, “I know what the hubbys are getting tomorrow”—was followed by illuminations such as Mapplethorpe’s penchant for listening to the “interminable” Vanilla Fudge song “Set Me Free” while he smiled on acid. Asides about leaving for Cleveland to induct Lou Reed into the Rock and Roll Hall of Fame tomorrow moved into words written about New York, Smith constantly pausing to applaud the crowd for reacting to jokes about Tex Avery. “Oh, good. You get it. So many places are silent at the reference.” And her serendipitous meeting with Allen Ginsberg, who donated a dime to help pay for her meal because he thought she was a “pretty young boy” make way to “Blakean Year” despite a buzzing amp (“crickets going through death throes”).

No one could help but be entertained by her confidence, charisma, and ability to brush off missteps like the consummate performer she remains. The aforementioned song was flubbed at its crescendo (“I’m bottoming out”), but she laughed it off and kept going. Smith lost her place in the book too, ad-libbing some filler jokes before Lenny found the page. But the best example of her Regular Jane persona came after sharing stories about hers and Mapplethorpe’s second anniversary on Coney Island and their photo shoot for the cover of her debut album Horses. Suddenly a cellphone rang and without missing a beat Smith placed her hand to her ear and said, “Hello? Not tonight.” She was having fun and so were we. Hearing her sing “Because the Night” before walking off stage was merely an added bonus.

For the first time in a long while it seems, Babel had an author willing to give more than prepared statements probably shared the week before in another city and again a week later somewhere else. Smith’s talk was stream of consciousness—or at the very least it felt like it was. We received personal facts like Mapplethorpe’s last words to her before succumbing to complications from AIDS (“Would you write our story?”) and Lou Reed passing her on the street for the last time saying, “I love you, Patti.” We heard about her cultured parents reading Plato to guests in their lower middle class neighborhood—friends to all who were nice people—and her mother giving couples entrenched in the AIDS epidemic with nowhere else to go sanctuary while tirelessly replying to all Patti’s fan mail.

The words read from Just Kids sold me on the book despite my already purchasing it for a signature and the music sung pierced everyone’s soul courtesy of an immaculately preserved voice, but it was the small tales told during the Q&A that stuck most. How she wrote fan letters to Veena Sud concerning the producer’s American adaptation of “The Killing” and subsequently landed a part in the final season to meet Linden and Holder (she used their character names like a fangirl would). And how her parents giving her a bicycle on her twelfth birthday made it so she’d always cherish them, even if they tricked her (Santa didn’t bring the bike five days earlier and instead of saying “Happy Birthday” they ignored her all day before revealing the gift under the auspices of her helping put up a new shower curtain).

She spoke about love—love and kindness and the idea that you should always do good work because it is what drives you and what matters. “Fame and riches fade away, but good work endures.”